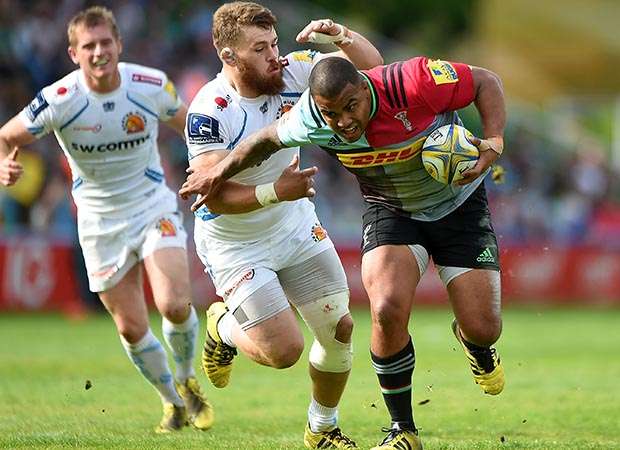 Kyle Sinckler is determined to leave his promising youngster tag behind and break into Eddie Jones’ England team en route to becoming the best No.3 in world rugby.
Since representing England at age group level, the 23-year-old bruiser has been marked for stardom.
He toured New Zealand with England in the summer of 2014, but did not feature in the World Cup plans.
On the back of his best season to date, though, he did tour Australia this summer but couldn’t supplant Paul Hill as Dan Cole’s understudy. Now, having moved ahead of Henry Thomas and David Wilson, the Harlequins tight-head is hungrier than ever to earn a first cap.
Sinckler told TRP: “I didn’t get to play in Australia but I realised how much better I can be while on tour. I want to be the best tighthead in the world and now it’s up to me to prove it.
“I learnt a huge amount from Eddie Jones and the rest of the coaches while in Australia. I’ve pushed my body to places I never thought it could go during those seven weeks.
“Eddie is the best coach I’ve been around. He knows how to get his players ticking and he’s someone I really want to play for. I’ll do anything he tells me to do.
“He’s my kind of coach, he tells it straight. He told me before the Brighton camp that I was fourth choice and that fourth choices don’t go on tour. I had to prove to him how desperate I was to go to Australia and it worked.
“It’s hard to break into a winning team but I’m determined to do it. I’m happy to have been named in the EPS but I see it as just the beginning for me. People keep telling me I’m still young but I’ve got to kick on this season. I have to go from being a promising youngster to a Test player.”
And he knows exactly what he has to do to put more heat on Hill and Cole.
“The main thing for me is consistency. I don’t want to have a nine out of ten game one week but then a four the next. I’d rather have a seven throughout so the coaches know I can be reliable.
“My discipline on the field is key, too. I’ve got to keep bringing my aggression but it can’t be at the expense of the team and I improved that last season.
“It comes down to maturity and game time and I hope to start more games this season for Quins. Training with Adam Jones, Joe Marler and now having Graham Rowntree as coach is the best thing for me. I’m at the best place to fulfil my dreams.”
NICK VERDIER