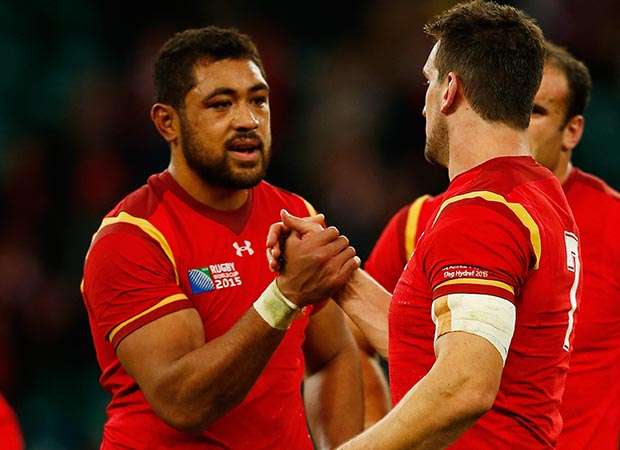 Luke Charteris reckons Bath can bring the best out of Taulupe Faletau.
The Wales pair and former Newport Gwent Dragons team-mates will be reunited at the Recreation Ground next season.
While Charteris will return from France, Faletau is to leave Wales for the first time, after agreeing to make the break from his home region.
Despite playing the majority of his week-to-week rugby at the back of a beaten scrum and in a side rarely in the top half of the Pro12, Faletau has been good enough to have been capped 52 times by his country and made a Test British Lion in 2013.
Now Charteris believes playing in a star-studded side that includes England stars George Ford, Anthony Watson and Jonathan Joseph will send No.8 Faletau to another level.
Charteris told The Rugby Paper: “Taulupe is a quality player and any team would benefit from having him on the field. He is going to a team that is playing exciting rugby and will really suit him and the way he plays.
“It is such an ambitious club and that’s a great atmosphere to be part of. There are already a lot of exciting players at Bath and he will really fit in with their style.
“Taulupe can become an even better player from the move. Every week the competition is intense, you’re playing with the best players around and against the best players and there is so much riding on every match. That sort of exposure it bound to make you a better player.”
Charteris, like Faletau, began his career at Rodney Parade before signing for Perpignan in 2012. Two years later he moved to Paris to join Racing who are now top of the Top 14 and have qualified for the European Champions Cup quarter-finals.
He said: “I know there’s a lot of politics around players moving away from Wales but for me it was the best thing I ever did.
“Off the field it has been an amazing experience. We are very lucky in rugby that we can go and work abroad. But my rugby has also come on leaps and bounds. I’ve learned a massive amount from leaving Wales.
“My view is that players leaving opens up opportunities for other younger players back in Wales. It’s a great experience and hopefully that’s something Taulupe will find at Bath.
“I’m going to really miss France. I’ve been out here for four years and would have liked to have stayed longer but given the circumstances, it was best to go back. I’m looking forward to going to Bath, which is an exciting team to be a part of.
“I lived there for eight years, went to university in the town and my wife’s family are from the area so I was looking to end up there after rugby.
“Bath put a lot of emphasis on player development, making sure that everyone is improving no matter how experienced they are, and that is a very exciting environment to be part of.
“But first I want to leave here with some silverware. To challenge in the Top 14 and Europe is incredibly tough but I think we now have the squad to do it.”
MATT LLOYD