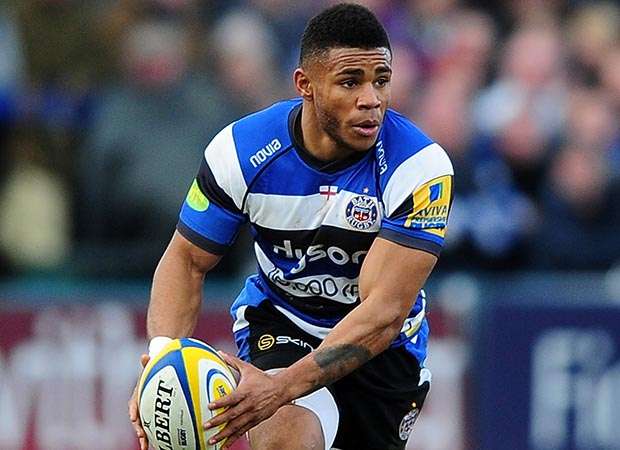 Bath new boy Rhys Priestland believes England can put their inside centre headache behind them by selecting club-mate Kyle Eastmond for the Six Nations.
Having long admired him from afar, Priestland says he has become convinced of Eastmond’s international calibre since arriving at The Rec following the World Cup.
Sam Burgess may be gone, but his return to League has hardly made the answer to the question of who should occupy the England No.12 shirt any clearer, with Henry Slade, Luther Burrell, Brad Barritt and Billy Twelvetrees among those with their advocates.
However, former Scarlets playmaker Priestland is convinced fleet-footed Eastmond should get a second shot at the role, having made his Red Rose debut at inside centre in 2013.
“I remember training against Bath with Scarlets a while back and thinking Kyle was the one player who I was really, really impressed with,” Priestland told TRP.
“Watching him in training, the way he can take the ball to the line and distribute is so impressive, and he’s such a dangerous running threat.
“Every coach has their own philosophy and come the Six Nations the England coaches will have a certain way they want to play.
“Do they pick the best players and play the way that complements those players? I’d have him in my team. He’s a fantastic player.”
Priestland moved to inside centre when Eastmond was taken off midway through Bath’s six-try win over Irish last weekend, and Bath coach Mike Ford has intimated that the trio of George Ford, Priestland and Eastmond could rotate between the 10 and 12 shirts.
Ford snr, who last month announced that 40-cap Priestland would be taking a self-imposed 18-month sabbatical from Wales duty, said: “Rhys is getting there with Kyle and George. We’ve got some good options.”
Priestland believes there is plenty more to come from his partnership with Eastmond
“The more we can get Kyle involved, the better it will be for the club,” he said. “Unfortunately, we didn’t play the sort of rugby in the first four games of the Premiership that we’d have liked to and get Kyle on the ball.
“But we’ll keep working on it, and I’m sure it will click soon enough.”
Priestland was signed to give Bath greater depth at fly-half when Ford is away with England, but the Welshman says Ford can expect plenty of pressure all season.
“George has achieved such a lot for such a young age, and England played some fantastic stuff with him at 10 in last year’s Six Nations, so I’ve got to take my hat off to him.
“But I want to play 10 as well, so I’ll keep competing with him and see where that gets me. Hopefully it brings out the best in both of us.
“I get on well with him – we kick together and I’ll tell him about something I’ve picked up on and vice versa. Hopefully our relationship will benefit Bath.”
TOM BRADSHAW