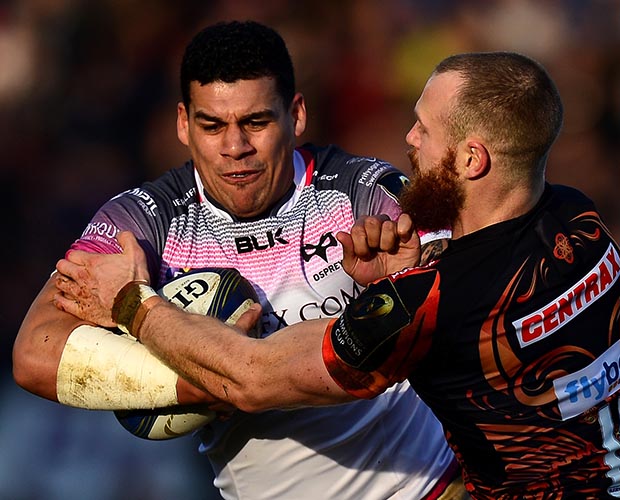 says that Newcastle’s ambition to be a real force in English rugby was one of the main factors in persuading him to move his family from one side of the country to the other.
The well-travelled Fijian international has made the North-east the latest destination in a career that has seen him win promotion to the Premiership with Exeter and taken in spells at Racing 92, Worcester and more recently the Ospreys.
“Niki Goneva texted me out of the blue and said, ‘do you want to come to Newcastle? I think Dean Richards wants to sign you’, and it all happened pretty quickly from there. Dean rang me up 20 minutes later and I met him and the rest is history,” Matavesi told TRP.
“It was a big thing for me to know that the club was moving forward, I didn’t want to sign for a club that was just happy to survive. I wanted to give myself a challenge and go to a club that was ambitious.
“People like Toby Flood and Maxime Mermoz are used to being in winning environments – and with those types of signings and what the guys here showed last season, expectations have been lifted.
“We are all here to win and to qualify for the top six or top four, not scrape home and let last season be the defining moment.”
Still only 26, the father-of-two is joined on Tyneside by younger brother, fly-half Joel Matavesi, who is on hand to not only offer competition for a place in the Falcons’ back line but also free childcare.
“I am quite close to my brother – people think we’re twins because they reckon we look so similar – so when we both signed it was non-negotiable that Joel moved in with us,” Matavesi said.
“He’s not paying rent, he just looks after the kids once a week, that’s the deal. He gets involved and is not afraid to tell them off which is good.”
At one stage, there was a chance middle brother Sam, a back-row forward, might join them on Tyneside.
“Newcastle were going to take a look at him but he’s just passed out with the Navy and you have to spend a certain amount of time on base before you can wander off and do other things. He’s in Cornwall and think he’s signed for Redruth for the season.”
Matavesi says being around his family has always brought the best out of him. “As brothers, we’ve always competed against each other especially as we are so close in age (Sam is 25 and Joel 22) and that helps you improve all the time.
“My dad had this dodgy yellow van and he’d load it up with all sorts of rugby kits – balls, tackle bags and stuff – and drive us down to the field to practise for hours on end.”
Camborne-born Matavesi stills holds the distinction of being Fiji’s youngest-ever player, capped against Scotland in November 2009 aged 19 years and 40 days.
Nowadays, though, he feels like one of the elder statesman. “I’ve been around the block a bit and played in a few different leagues so I have got a lot of experience now. Hopefully, I can offer some little insights, or tricks of the trade, but there’s huge competition within the squad and I’m under no illusions about being an automatic selection.
“With Juan Pablo Socino, Maxime Mermoz, Chris Harris, Dom Waldouck and a load of others, we’re not short on quality or experience in the centres.”
JON NEWCOMBE