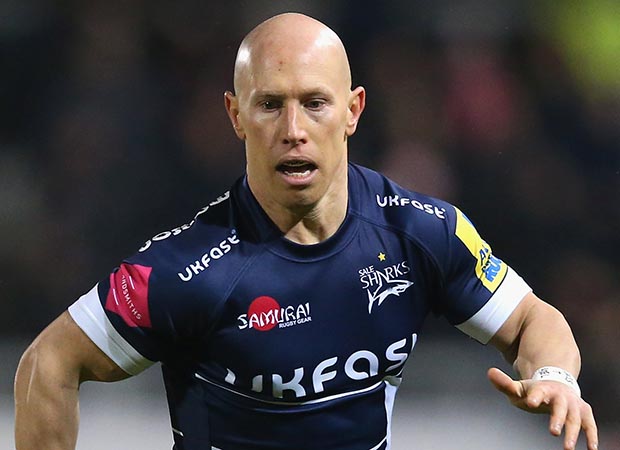 Gary Gold says Irish scrum-half Peter Stringer is rugby’s equivalent to Wimbledon champ Roger Federer – inspirational proof that age is no barrier to playing and winning at the top level.
Stringer, who turns 40 in December, arrived at Worcester on Thursday on a six-month deal, and declared himself fitter than he was two decades ago.
He may have a reverse pass rather than a backhand passing shot, but director of rugby Gold sees parallels between the 98-cap Ireland international and 35-year-old Federer.
“You saw the other day with Federer – if you look after yourself well enough then age doesn’t matter; in sport, you shouldn’t discriminate against somebody’s age,” said Gold.
“Everywhere Strings (right) goes people raise eyebrows, because you don’t expect a 39-year-old to still be able to run the tests and keep up with the youngsters, and have the decision-making ability that he still has. But he’s a teetotaller, he’s always been a fitness fanatic and he’s got a tremendous work ethic.”
The Premiership has witnessed some ultra-durable No.9s in recent years, including Saracens’ Neil de Kock, and Stringer attributes his own longevity to extra-curricular fitness sessions and an obsessive attention to nutrition.
“In the last five or six years I’ve concentrated on every element of my life with regard to diet and sleep,” said Stringer, who moved to play in the Premiership in 2011 after 15 years with Munster. “You look at all the little bits that make up your whole persona and that helps to motivate you.
“I’ve taken eating well to a whole new level to prolong my career and make the most of it. I’ll regret it forever if I don’t do everything possible to make sure I’m in the right state of mind and physical shape.
“I’m probably fitter now than I was 20 years ago. As long as my fitness scores are going up, I’ll carry on. I’ve looked for reasons to retire and I can’t see any.
“I can only see myself playing rugby – everything I do is to make that last as long as possible. I love the game and I’m a bit obsessed at this stage with keeping fit. It doesn’t take any talent to do it. It’s just a matter of wanting to do it.”
Stringer, who has been signed by Gold as cover for Rugby Championship-bound Francois Hougaard, is reunited at Worcester with former Munster and Ireland team-mate Donncha O’Callaghan, who was instrumental in bringing him to Worcester.
“Donncha is one of the fittest guys I’ve come across and neither of us has ever had a drink of alcohol so I don’t know if that’s got something to do with it,” said Stringer, who will compete with Luke Baldwin, Jonny Arr and Michael Dowsett for the 9 shirt at Worcester.
“Donncha said it would be good to have another set of lungs to shout at guys when direction is needed. He felt I could help that link between backs and forwards.”
Gold believes the two former Munster lynchpins will have a nurturing effect on his squad.
He said: “Ordinarily, we wouldn’t go out and sign a 39-year-old – it laughs in the face of everything. We want to bring the youth through, and I think I’ve done that since I’ve been here. But this is an exceptional circumstance. To have that older head in the squad when you’re having tough times is important.
“We’ve seen it with Donncha. When you’ve been brought up in the right culture, when you start getting into the twilight of your career you cherish every opportunity to play rugby.
“That’s what we want – somebody who brings that hunger and who wants to make a difference and leave a legacy.”
TOM BRADSHAW