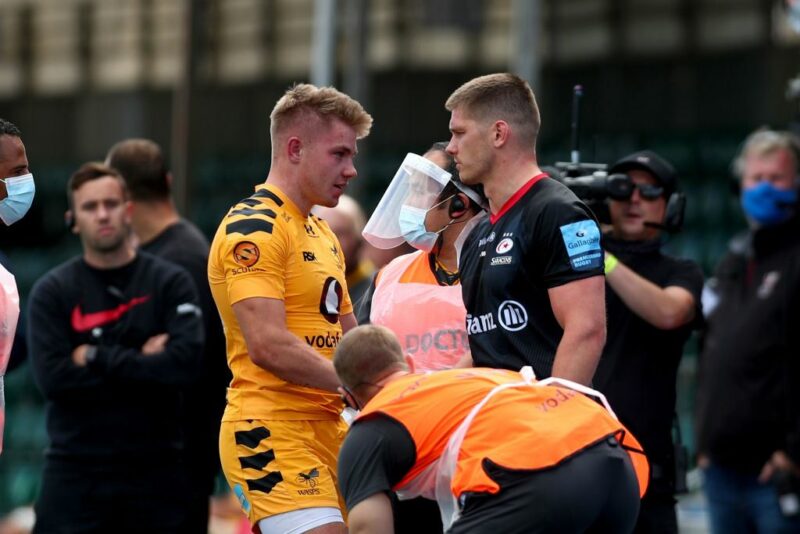 Owen Farrell will miss Saracens’ Champions Cup quarter-final against Leinster next week after receiving a five-game ban for the high tackle that has left Wasps fly-half Charlie Atkinson in concussion protocol.

The England captain is free to feature for his country but will be short of match fitness as his ban extends to October 5 when the Premiership regular season will have finished.

Things could have been worse for Farrell who faced a ten-game ban as his ‘reckless’ swinging arm was deemed a high-range entry point by a three-man independent disciplinary panel.

Ten games was reduced to five after the panel heard from Saracens director of rugby, England head coach Eddie Jones, and a charity who have worked with Farrell. The panel also discounted a previous short-length ban from 2016 to qualify a 50 per cent reduction after judging mitigating factors.

It was the first red card of Farrell’s professional career as Wasps went on to win the match at Allianz Park, 28-18.

Apologising to referee Christophe Ridley, Farrell could be heard saying ‘I know this was bad’.

Reaching its verdict on Tuesday evening after a four-hour long hearing, disciplinary panel chair Mike Hamlin released a statement which accepted Farrell had not acted ‘intentionally’.

“This was a totally unacceptable contact with the neck/head of Charlie Atkinson as a result of a reckless tackle which had the consequences of him being knocked unconscious and sustaining a concussion,” Hamlin said. “This resulted in the panel concluding this was a top-end offence.”

Wasps teenage back Atkinson is now mandated to sit out all rugby activity for two weeks, placing more pressure on the team’s options at No.10 of Jacob Umaga, Jimmy Gopperth, Lima Sopoaga to stay fit for their play-off push.

As for Farrell, he will miss the trip to Dublin next week where Saracens will try to snap Leinster’s unbeaten record in all competitions in 2019-20.

Should they manage to do so the 28-year-old would miss the semi-finals of the Champions Cup.