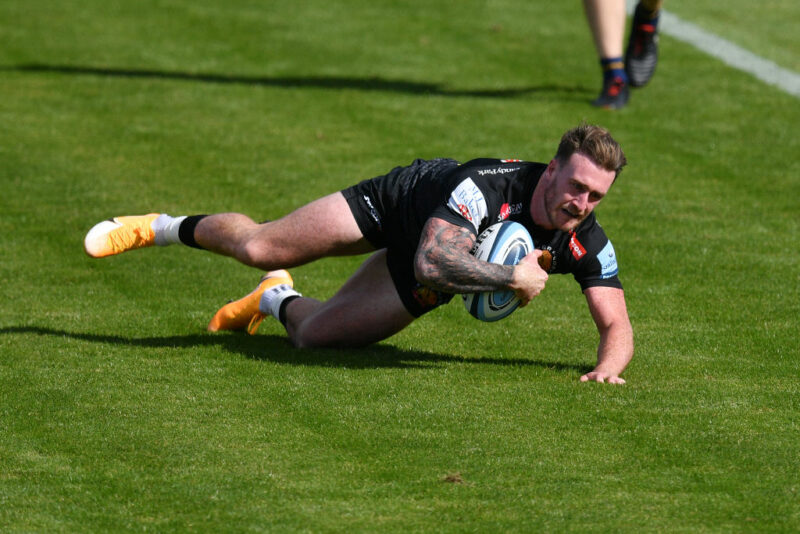 Two-time British & Irish Lions tourist Stuart Hogg faces up to a volley of questions from Nick Cain, after talking more in depth about his career with Scotland, Glasgow Warriors and current club Exeter Chiefs.

What made you want to become Scotland captain?

I wanted to be the middleman and take some of the pressure on myself… I felt at times with the boys that mistakes would eat away at them, and they would hide away a little bit. I don’t mind facing the negatives, because I’ll back the boys up. It was 100 per cent like if we played well, we were the best in the world, and if we were beat the same reporters were saying we were the worst in the world – and I’d had enough of it.

Do you feel like the one player in Exeter’s backline expected to deliver the x-factor?

I don’t necessarily look at that. It is very much a team game and I have got to do my role and responsibilities first, like catch the high balls, make my tackles, and distribute well. Then you can have a bit of fun – try to beat somebody and get a little x-factor into the game. But I very much play focusing on outcomes for the team first, rather than individual stuff, whereas in times gone by it was probably the opposite. If you look at Exeter the boys celebrate tries and wins as a team, and it brings out the best in everybody.

Is it fair to say you have settled in at Exeter better than you expected initially?

I’m a lover of everything Exeter Chiefs at the minute, and I’ve no doubt that will continue. The environment is one that Rob Baxter and the rest of the coaches have created through time – it hasn’t happened instantly. Rob has been at the club a long time, and he and the coaches lead by example, but it is also very much player-driven. Everyone buys into it, and at Exeter it’s just a way of life. I feel very fortunate to be here.

You wear very similar kit in training as you play in, so you very much feel part of a team 24:7. I like it a lot. There’s a huge emphasis put on standards, and that’s why there is such a positive environment. It’s why you want to be around it, and involved every day – and that leads to results on the field. The key is that consistency in the way we prepare, gives us consistency in the way we play.

Do you embrace social media or dodge it?

The only people whose opinions matter to me are those I work with, and my family and friends. I could be given 2/10 in the paper and I couldn’t care. There was a stage I went through when I tried to prove people wrong, but you can’t win, so I handed the social media to my agency during the Six Nations. I’m done with all of that.

How is Devon life treating you compared to the Clyde?

It took a while to get the kids settled into the new house, and then head back to Scotland for the Six Nations, so we haven’t seen too much of Devon. But we’re getting to see more, and we’re loving it. It’s a beautiful part of the world, and we’ve not even scratched the surface. I have a severe lack of DIY skills, so I tend not to bother – but there’s strengths and weaknesses to everyone.