Posted on 5th August 2020 by admin in Latest News, Premiership 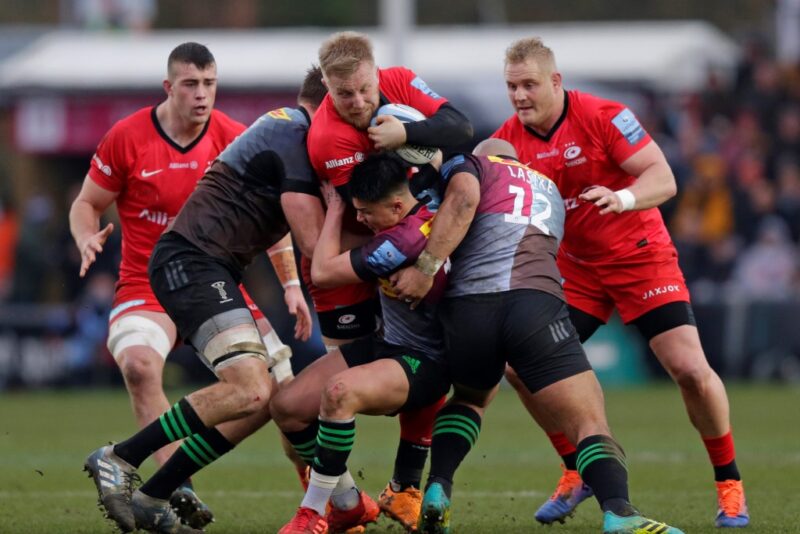 Jackson Wray wants to become a leading figure in Saracens’ revival after extending his contract until 2023.

Along with fellow academy products Owen Farrell, Jamie George and Maro Itoje, long-serving back rower Wray is plotting a trophy-laden future at Allianz Park, as well as continuing to plan for life after rugby in the sports mentoring role he is developing alongside it.

While a year in the Championship beckons, Saracens remain intent on causing damage in Europe as a Champions Cup quarter-final showdown with Leinster draws closer.

Wray, 29, told The Rugby Paper: “We know we won’t be playing in the Champions Cup for at least a couple of years so it’s an opportunity for us to leave an indelible mark on the competition.

“We’ve obviously lost some players but we’ve still got an unbelievably strong squad with some cracking leaders in this side like Brad Barritt, Owen Farrell, Jamie George and Maro Itoje, so we’re really looking forward to priming ourselves for some big games.”

Wray, whose work with ‘Sharp Skills Coaching’ involves advising young players in rugby and football, in which he has close ties with West Ham United and Fulham, says leaving Saracens was never on his agenda as he looks to add to a glittering haul of silverware.

Wray said: “We were looking at my contract before everything got locked down and I always wanted to extend it, so it made sense to do it now. I had no hesitation at all because we want to try and build again and win stuff for years to come.

“If you look at who’s staying and what we’ve all decided to do, it speaks volumes about what people think of this club’s future. There’ve been opportun- ities to go and a few people are doing that, but most of those leaving are coming back next year and the majority are staying with the intention of kicking on and getting this club back to being the best around.

“The continuity is massive and it’s great that all the coaches are staying as well, so it seems everyone is on the same page and everyone is striving to get better. I love it here, there’s nowhere else I want to go and I love being around the lads, so staying was a no-brainer.”

Wray added: “What you’ve seen over the last decade is we are very tight and are a group that’s worked together for a long time. We know how strong that collective is and although some people think it’s been easy for us to win trophies, I can assure them it’s hard.

“To be the best is difficult with all the sacrifices that come with that, but we all want more of it and there are a lot of guys who think we can win again. There are lots of young guys coming through as well and helping them is something we all want to be a part of.”

Just as Wray once benefitted from learning at the shoulder of experienced campaigners like Ernst Joubert, Kelly Brown and Jacques Burger, he is the one academy young bucks like Sean Reffell and Andy Christie can now turn to as they make their own way.

“That’s absolutely what it’s about,” says Wray. “Our academy has produced unbelievable players and will continue to do so, so I just want to be at the club for as long as I can to help the younger guys get better and make the most of what they have.

“I’m only 29 and far from finished, but that’s something I’m really looking forward to now and having been at the club so long, it’s built into our DNA. I learned from different people and now it’s for us older guys to show the way and lead as well as possible.”

With an eye to the future, Wray is keen to maintain the close relationships he has developed in football. He explained: “I worked with the academies at West Ham and Fulham pre-lockdown and I’m looking to build on that because I find it really interesting.

“I’m good friends with Liam Manning and Jack Collison, who were coaching age group teams there, and I just tried to impart a bit of my rugby experience on the young football pros. If I can affect them in a positive way, that’s the aim.

“Liam’s just gone into his first senior management role at Lommel SK in Belgium, while Jack is coaching in Atlanta as part of Manchester City’s global network, but we still keep in touch and I’ll be looking to work with them again, as well as at West Ham.

“It’s fascinating looking at different environments from a mentoring perspective and football’s very different, but it’s something I’ll be looking to get into post-rugby. In the meantime, I just want to try and help our young players at Saracens reach their potential.”