Posted on 6th August 2020 by admin in Latest News, Premiership 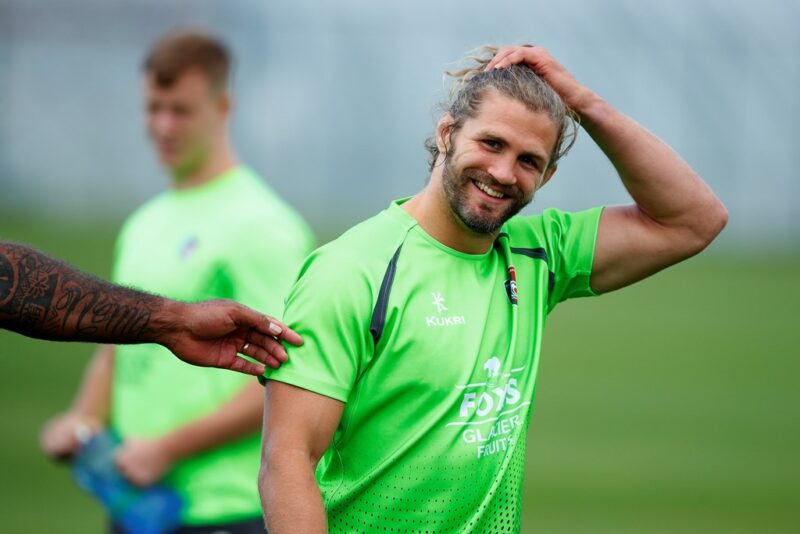 Relieved to be back in the Premiership after a season with Championship outfit Coventry, former Harlequins flanker Wallace says Borthwick has already proved an inspirational presence since trading in his England job to transform Tigers’ pussycats into title contenders.

Wallace told The Rugby Paper: “Coming to Tigers now there’s definitely expectation that we’re going to win the set-piece, dominate that area and be physical in the tackle – just like the Leicester of old – and that’s been a massive focus for me in the short time I’ve been here.

“As far as Steve’s influence is concerned, I can compare it with what Paul Gustard brought to Quins two years ago, just how the whole energy around the buildings changed instantly.

“In my first week here with Steve, we had a meeting in the stands at Welford Road where he gave us a really inspirational speech. It was clear that the whole squad want to work with this coaching team and each other – and that is going to show when we get back to games.

“We spoke about the DNA of the old Leicester and taking the good from that and adding new DNA of our own. Steve spoke about it being a working-class town where people expect us to work hard – and I can tell you we’ve been putting in the work over the last few weeks!

“Leicester have struggled but pro sport is about fine margins. People always say that but things really can change quickly and sometimes it only takes small things. We’ve talked a lot about working flat out for 80 minutes and hopefully we’ll see a change when we get back.”

Wallace’s top-flight prospects looked bleak when he swapped the bright lights of London for the Midlands a year ago. However, the 29-year-old’s decision to drop a division paid off, although he did consider opportunities in America and Japan before Tigers pounced.

He explained: “It’s definitely good to be back in the Premiership and the goal in going to Coventry was to play as well as I could and get back to the top-flight as soon as possible.

“Coventry and Leicester trained together a few times last year and I always made sure I spoke to the Tigers coaches after that. The Deacon brothers are involved with both clubs so that probably helped and it was just a short hop across from Coventry for me.

“Once coronavirus happened and budgets started shrinking, though, I did fear it might not happen. I thought I’d been playing well enough to make the jump back up, but with squads being cut I thought it was maybe time to look elsewhere in terms of Japan or America.

“I spoke to Chris Robshaw about America and it’s an option I’d like to explore one day, but I want to stay in the Premiership for as long as I can and I’m really pleased the move to Tigers came at the right time. It was the first opportunity I got and I took it with both hands.”

Back row competition will be fierce, but Wallace added: “The way I see it, with squad sizes shrinking there is an opportunity for some experienced guys to come in who really lead in a smaller squad environment – and that’s what I’m trying hard to do at the moment.

“I want to help the younger guys become the best players they can be while putting my best game out on the pitch as well. I’m here to play, make no mistake about that, and there’ll definitely be opportunities for plenty of game time because of the scheduling.

“We’ve got a very balanced back row here with a lot of guys who’ve got different skillsets, which should mean we can select the right group for each game as it comes. There’ll be lots of guys competing for shirts but it’s up to me to make the most of this great opportunity.”

While Wallace looks towards a brighter future, he leaves behind a Coventry side seeking a new way forward within a Championship set-up that is in flux.

Wallace believes the league still has an important part to play and says ring-fencing proposals tabled by former Saracens CEO Edward Griffiths may have some merit.

“As I worked out early on, it’s a slightly different game in the Championship,” Wallace said. “It’s much more set-piece to set-piece, probably a bit more structured, and in that respect it probably didn’t suit my game. It was almost like we never went through enough phases for my skillset to really excel, although I definitely got used to tackling harder and more often.

“At the moment the Championship is a very physical league, very forward-orientated, so I think that by potentially splitting it into north and south conferences with no relegation involved, you would maybe encourage more expansive play, which I think would drive crowds and probably allow younger players to break through a bit quicker than they currently do.

“Whatever happens, the Championship should be treasured. I played in it ten years ago with Esher and it’s such a valuable tool, especially for young forwards who might find it harder to step straight into the Premiership. With the cutbacks, the RFU sent a message that it’s not valued as much as it needs to be, but the competition has been great to me.”