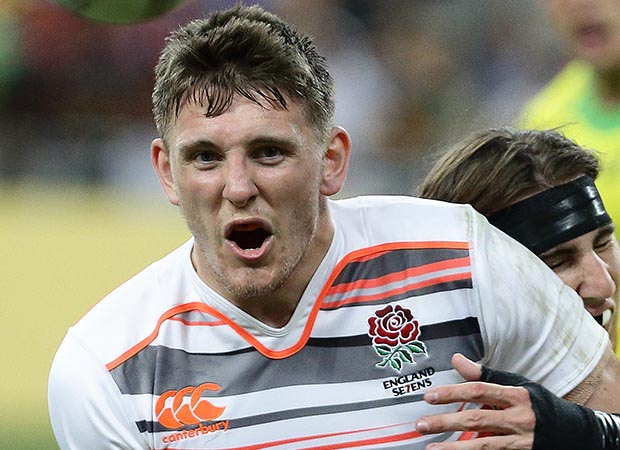 How long have been involved with England Sevens?
I’ve been coming from Loughborough when I was needed this season and started playing for the academy in invitational tournaments.
Was it easy to mix studying with training in London?
Loughborough have been great allowing me to take some time off to come down to London and train.
Made your World Series debut in Vancouver?
It was great fun. It was my first experience on the World Series and we ended winning the tournament too.  It was a great time for me to get involved.
How big was the step up?
It was big but luckily for me I had played for the academy earlier this season in Dubai and in Kenya. Had I not done these two tournaments I reckon I’d have definitely struggled in Vancouver.
Training with the senior squad must have helped too?
The senior guys made me feel really welcome when I first arrived. They just told me to do what I’m used to and go from there. That put a lot of confidence in me.
You won the Dubai tournament, didn’t you?
Yes we did. It was my first proper two-day tournament so to come away with the win playing with a good bunch of lads was outstanding. It was good way to start the season.
How’s the academy going?
It’s going really well and you can see it with the results as we won in Singapore and finished third in Kenya. It’s helping all the youngsters pushing through.
How did the move to England Sevens come about?
It was very random. I was asked by Simon Amor, the head coach, to come down for training at the end of last season and he must have seen something in me. It was nothing formal but I enjoyed it.
Got a contract for next season?
Yes. I’m still going to be studying, which I’m thankful for, but I’ll be contracted full-time with the England Sevens programme.
Where do you play?
I’m a playmaker so I usually slot in at scrum-half of fly-half.
Enjoying working with Dan Bibby and Tom Mitchell?
I couldn’t really ask for better player to train with and you have Ollie Lindsay-Hague in the squad too. It’s very useful for me to ask them about how they’d react to certain situation or analyse my decisions on the pitch.
Which position did you play in 15s?
I played full-back this season for Loughborough which gave me a good idea of how things work from behind. I got used to the sweeper role which made the transition easier I think.
What about the fitness?
I thought I was fairly fit but I’d never been to the level of professional Sevens players and the first few sessions opened my eyes.
Can you measure your improvements?
Not really as the tests we did at Loughborough are not the same with England. But I know I’m a lot fitter than I’ve ever been. I’m feeling better and better as the season is finishing which can only be a good sign.
Happy with the season so far?
I’ve been in and out of the team and I’ve only played in two tournaments but from what I hear in training I think everyone is pretty pleased with the season so far.
Two tournaments left in the World Series?
It’s good to have them on our doorstep with them being played in Paris and London over the next few weeks. Hopefully we can put in a good performance.
Can you chase down Fiji and finish second?
It’s hard for me to say as I’ve only just joined the set up but I’m sure we’ll be trying our best and maybe we can end a good season in second place in the overall table.
If not rugby, what would you be doing?
I’m studying Mathematics but I didn’t get to think my future plans as England offered that contract. It was a blessing in disguise I guess.
Favourite cheat meal?
I don’t really have any to be honest. I’ve always tried to eat as healthy as I can.
Three special dinners guests?
Nelson Mandela, Muhammad Ali and David Attenborough.