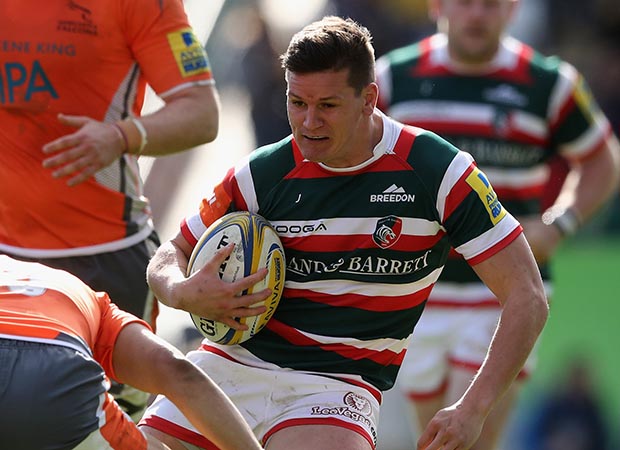 Matt Banahan is convinced Bath have emerged far stronger from the controversial deal that saw George Ford and Freddie Burns swap clubs.
Former Leicester man Burns made no secret of his anger at having to make way for England fly-half Ford after being forced out of his Tigers contract early.
However, Bath winger Banahan told The Rugby Paper: “It’s strengthened us because now we have two fly-halves in Freddie and Rhys Priestland who will both be here competing with each other pretty much throughout the season.
“In previous years George has been No.1 but he’d be away with England for long periods while Rhys might have been with Wales as well, so we got the rough end of the stick. Now we’ve got two quality No.10s who probably won’t go missing.
“Freddie’s obviously got international ambitions so that might change, but there’s an opportunity for him to lead our team and show himself and you’d expect both of our fly-halves to enjoy a lot of good game time over the next 12 months.”
Meanwhile, long-serving Banahan, below, has revealed how he is battling to earn a new contract as prepares for his 12th season at The Rec.
The Jersey-born flyer, 30, explained: “I’m in my last year so I’m playing for my future and the big thing is not to drop off the standards I’ve been playing at.
“We haven’t started talking about a new contract yet but if they don’t speak to me before January 1 then I’m on the open market, I guess.
“In an ideal world I’d like to finish my career here but when you see what happened to Freddie, you really can’t think of things like that.
“If Bath don’t want me I’ve got to put myself in the shop window as well, so either way I need to be playing well to be offered a contract.”
Bath have endured nine years without silverware but Banahan believes this could be their season under inspiring new captain Matt Garvey.
He added: “Matt’s a good, solid character to have around and he thrives in the leadership role and really pushes the guys from the front.
“We missed out on the top four narrowly last season and the biggest frustration was losing to three of the teams nearest the bottom.
“If we’d won those matches we’d have been right in the mix, so our basics have to be better and that’s what we’ve been working on.
“We’ve been close but it’s a long time since we won anything, so we’ve got to make sure that if we get a chance this year we take it.”
NEALE HARVEY