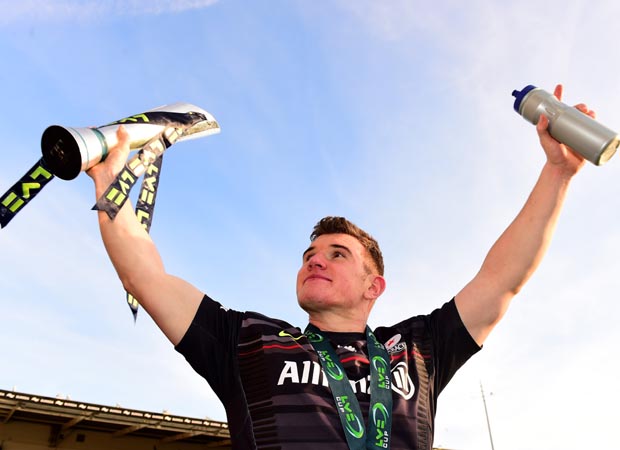 Cup hero Ben Spencer is well on the way to becoming “world class”, according to Saracens scrum-half Neil de Kock, who tips the Manchester-born pivot to become a key member of England’s 2019 World Cup bid.
Spencer’s last-gasp LV=Cup final penalty against Exeter earned Sarries their first silverware in four years.
His performances throughout the competition have also been superb and former Springbok De Kock has the 22-year-old marked down for greatness.
De Kock, who revealed to The Rugby Paper that he intends to retire in 2016, said: “I’ve worked with Ben for a number of years now, seen the work he has put in and he definitely has the potential to play many Tests for England.
“His diligence and work ethic is second to none and I’ve seen how strong and explosive he’s become, how good a kicker he now is – not just with one foot, but both – and I think he has the drive and dedication to be a world-class player.
“Ben’s been in scintillating form for us every time he’s put his foot on the field. He’s a metronomic goal-kicker and I’ve played with and against many top players in my time but he’s one of the best kickers of a rugby ball I’ve ever seen.
“His game has got better and he’s a guy who’s very disciplined and puts in hours and hours working on every aspect of his game.
“He’s definitely ready and he’s putting myself and Richard Wigglesworth under a lot of pressure for our places. He’s reached an unbelievable standard in the LV= Cup and the pressure is on us now to go out and maintain that standard.
“But that’s very healthy for the club and Ben’s time is coming very soon in terms of taking those next steps up.”
De Kock will call time on an illustrious 16-year pro career when his Sarries contract expires at the end of next season. Before then, however, the popular former Western Province and Stormers No.9 has unfinished business with the club he joined in 2006.
“One more season and that will be it,” De Kock, 36, said. “But the hunger is still there, my body’s in good shape and I’m enjoying my rugby.
“Every game is huge for me now and to win a European Cup would be the pinnacle. We’ve had frustrating times over the last three years with quarter-final, semi-final and final defeats so hopefully we can go one step further now.
“We’ve got a massive game next week at Racing Metro, who are notoriously good at home, but one thing we’ve never feared is travelling. Hopefully, we can grab a bit of motivation from our LV= Cup win and go out and win this thing.”
NEALE HARVEY