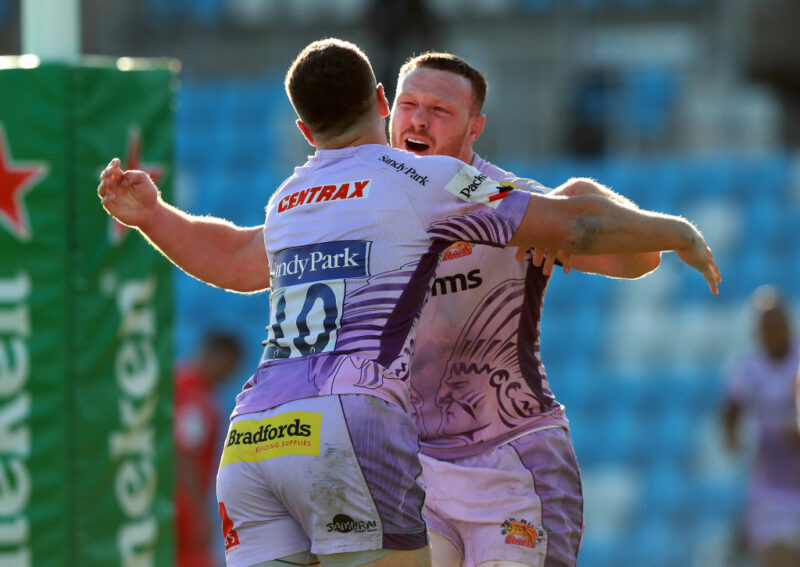 Exeter star Sam Simmonds has launched an emotional plea to get lower league rugby back up and running in order to safeguard the future of clubs like Teignmouth.

Along with fly-half brother Joe, No.8 Simmonds came through the mini and junior ranks of the local Western Counties League outfit before breaking into the big time.

Unlike Exeter, though, the doors of Teignmouth’s homely Bitton Park ground remain locked in the wake of Covid-19, threatening their future and the existence of hundreds of other Championship, National League and amateur clubs up and down the country.

While football has returned safely at all levels, full-contact rugby remains outlawed, but European player of the year nominee Simmonds, whose father, Dave, and his uncle also played at Teignmouth, believes the time has come for that situation to be reviewed.

He told The Rugby Paper: “Teignmouth’s our home and it’s tough times for everyone at the moment. A lot of our friends are there and, with the rugby side, they’re just as emotional about the game as me and Joe and we both try to go down there as often as we can.

“My dad and uncle have been huge parts of the club – dad captained the side for a couple of years – and Joe played his first senior rugby there. I came through the juniors and we have lots of mates there, so it’s heart-breaking that they can’t play any rugby.

“I hope we can come to an agreement to get things going again because for guys in the lower leagues and amateur game, it’s quite devastating for them not to be playing. If they have to wait a long way into 2021, I don’t know if the game would come back from it.”

Simmonds, who has played for Brixham, Plymouth Albion and Cornish Pirates, too, fears for the future of clubs and players alike unless firm resumption plans are put in place.

He added: “Clubs like Teignmouth rely on their clubhouses but the bar’s not been open there since March, so where do they get their money? A lot of people are helping the club through their own generosity, but that only lasts so long and they need to play.

“It’s not just the financial aspect, rugby is a social sport and that’s part of the ethos and why it’s so good for people’s mental health. People love to go training on a Tuesday and Thursday and have a beer or two, but at the moment that’s been taken away.

“Hopefully, we can find a way of bringing the game back because I’ve got a friend in Josh Caulfield, below, who was at Chiefs last season but has signed for Cornish Pirates, and he’s been down there training for three months, but they’ve actually got nothing to train for.

“They’re training to stay fit but they don’t have a start date for the Championship, they’re just drifting in limbo. They’re professional rugby players in the second tier of English rugby but they have no way of knowing when they’re going to play, which is really sad.”

Meanwhile, Simmonds is doing his bit to keep morale high in Devon as part of a Chiefs side that have reached their first European Cup final and are gunning for a double.

With mighty Toulouse having been vanquished in last week’s semi-final and Racing 92 now awaiting, along with a Premiership semi-final this weekend, Simmonds said: “Hopefully we’re bringing some joy for people watching on telly and while we know the job’s not done yet, we put in a massive performance against Toulouse and we’re dead set on topping that off.

“As a group we believe we’re a dominant force but there were still people who didn’t believe in us and said we hadn’t done it in Europe, but we came up against Toulouse, the four times champions who had all the pedigree, and we answered a lot of those questions.

“When we look around our squad now, we’re thinking ‘why not us?’. We’ve got the belief, we’ve got the players and it’s great to see people like Stuart Hogg and Jonny Gray – 50-cap internationals – who want to play for us for success and not go anywhere else.”

With England selection looming, Simmonds and brother Joe could not be doing much more to press their respective claims. Sam added: “I’m so proud of Joe, he deserves all the plaudits he’s getting, not just as a leader and captain but for what he does on the field.

“He’s maybe not as exciting or flairy as some of the other young No.10s around the Premiership and in the world at the moment, but there’s not many other 10s who do what he does. His goal-kicking is near enough 100 per cent and his performances lift the whole squad.

“On a personal level, I just want to keep playing well for Exeter and go on and win things. There are others in my position playing well – I’m seeing it each week – and other boys feel the same as me and want spots in that England squad.

“It’s kind of out of your hands, but if you play well you put yourself forward to be looked at and picked – and I’m assuming Joe feels exactly the same.”