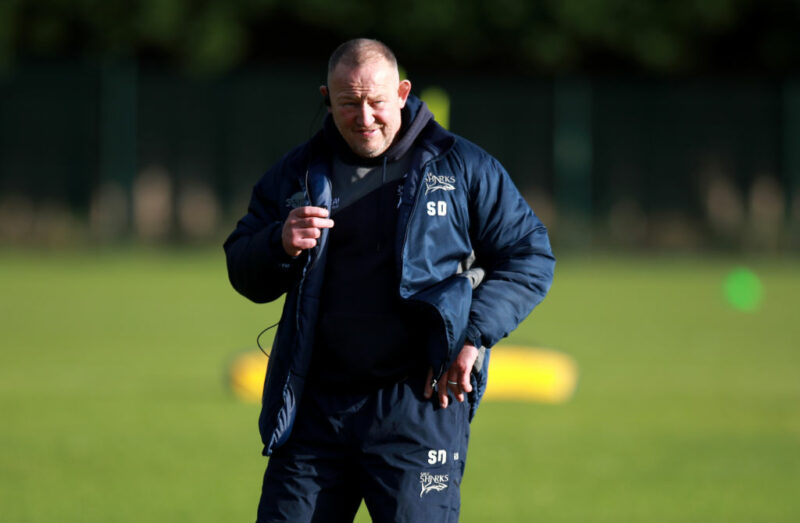 Sale Sharks director of rugby Steve Diamond has welcomed the soon-to-be-published report revealing the results of an RFU investigation which he claims clears the club of wrongdoing in allowing 27 people to test positive for COVID-19.

The outbreak cost Sale their chance to contest for a semi-final place in the Premiership knockout stages, as their match against Worcester Warriors was cancelled, derailing their dream of reaching a Twickenham final.

It instead led Bath to face Exeter Chiefs while Sharks came under the microscope of the RFU for a breach of protocols.

A six-week investigation has been concluded with the results set to be published on Tuesday, with Diamond claiming the team have been cleared of being negligent and that a false negative test had been their season’s downfall.

Once the report became viewable to the public, Diamond went on to say he hoped the rugby community would take time to reflect on pointing the finger of blame at Sale by calling out Pat Lam and Alan Solomons, specifically.

“Quite rightly we were cleared by the RFU. The judgment isn’t out until this afternoon but that appears to be the decision.

“I’m philosophical about it really. Obviously, we had a mass outbreak so they have got to have a look at it. I’m just a bit disappointed with rugby in general really over the event where Pat Lam, Ugo Moyne, Alan Solomons all jumped in on these false allegations that we were partying in the inner city and the student areas of Manchester, which was a real poor thing to say with no evidence and was factually incorrect.

“I’m disappointed with them. I thought rugby had a bit more about it. Maybe I’m one of them blokes who is too old school, that we believe these qualities are there, that you don’t do each other on the slightest thing, but obviously not. The world’s changed a little bit, so a bit disappointed about that. But delighted that the decisions that have come, that we have been exonerated. There are some issues no doubt in the report that will be advisory and will be advisories for all clubs.

“I knew when I went on BT and said that none of our players had been out into Manchester, it just didn’t happen. I knew that was the case then. What we have done since is put it to bed. We have not really talked about it at work.

“We managed to get four weeks off which was the positive of it and we have trained for two weeks pretty hard. It’s one of those things, it’s a peculiar year and we move on. Hopefully we can get this season started on Friday and crack on. Hopefully some normality will return in the new year.”

The cancellation of Sale’s final match of the regular season came after they recorded additional positive tests prior to the rescheduled match against Worcester on Wednesday October 7 on top of the 19 confirmed cases.

As a report by The Telegraph claimed that Sale Sharks had partied following their Premiership Cup triumph was refuted by the club, purported to be the event that was the source of the outbreak, Alan Solomons weighed into the situation.

“The north of England is an area where the virus is on the increase,” Solomons commented prior to their match with Sale being called off.

“There are the circumstances there with a definitive cluster of 19 people, second wave, and they need to take a decision.

“It is their decision, and they bear the consequences of those decisions.”

Anger at Sale Sharks had been fuelled further by the isolation period enforced to Northampton Saints, their opponents the week before the first positive tests were recorded at Sale’s Carrington training base.

With a number of front row players requiring to self-isolate prior to Northampton’s final match against Gloucester, Premiership Rugby refused to grant Saints licence to sign loan players and contest the match – a must-win for Saints if they were to secure qualification to the Champions Cup.

But with an insufficient number of players available, the match was cancelled and a 20-0 victory awarded to Gloucester, who earned qualification to the Champions Cup at the expense of Worcester.