Posted on 10th August 2020 by admin in Latest News, Premiership 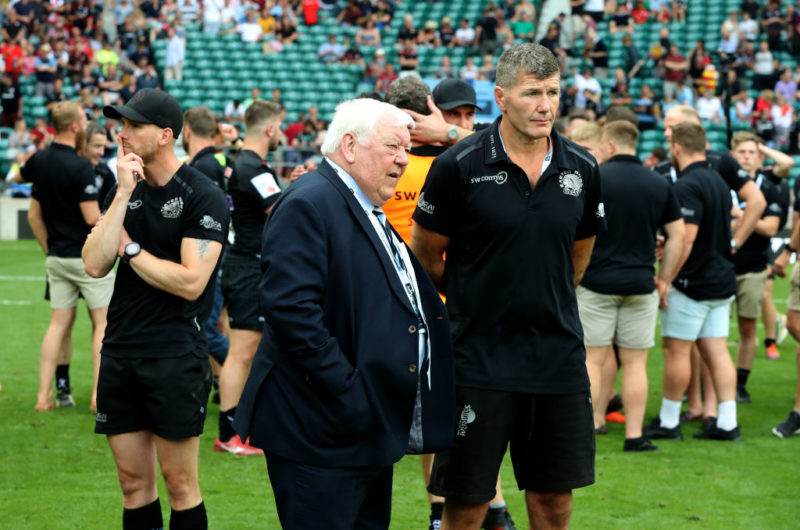 Rowe believes the financial effects of the coronavirus crisis on top-flight rugby are not being fully appreciated within the wider rugby community after revealing the Chiefs lost £3m during April, May and June and are continuing to haemorrhage around £1m a month.

Despite trimming player wages, the ongoing lack of crowds and corporate hospitality revenue is biting deep, and with the threat of a cash-strapped RFU slashing their £27.5m a year deal with the top-flight clubs, Rowe believes Covid-19 could prove catastrophic for some.

“I don’t think the rugby fraternity realise how much their clubs are losing and it’s currently costing us just over £1m a month to keep operating,” Rowe told The Rugby Paper.

“We still have to maintain all the infrastructure, as well as the playing side, and it’s been difficult. Sandy Park has had to cancel over £1m in corporate business from banquets, conferences and dinners and I can’t see when that will come back so it’s eating into our reserves.

“Everybody’s held up Exeter as the ideal business and a profitable club because we have Sandy Park Conference and Banqueting that pays the day-to-day bills and all these bums on seats on matchdays, but for the last five months that’s been a millstone around our necks.

“We can’t earn any revenue and yet the outgoings remain the same.

“Your central funding is made up of TV, league sponsors and the RFU money covers some of it, but the bigger money is bums on seats and if we can’t get spectators into the stadium, we’re all in trouble.

“Most of the clubs will have worked out how long they can survive and if we can’t get some decent revenue coming in by Christmas, we’ve got serious problems.

“We’re fortunate in having lots of assets we can take to the pawn shop, but I do fear for some other clubs.”

With season ticket sales for the 2020/21 campaign still buoyant, Rowe says it is critical for all clubs that crowds return by October to allay any fears of bankruptcy.

However, Covid-19 remains a huge threat and any further lockdowns could close some doors for good.

“You feel helpless,” says Rowe. “I can look at things here and say don’t do this or that, but with what’s happening I can’t do anything to fix things.

“We are in a situation that is not of our own making and we can’t get out of it until the Government says we can – or we get a vaccine.

“In September we have to refund people who asked for money back, thankfully there was a number of season ticket holders who gifted their money and we are very thankful to them for that.

“Our pre-sales for season tickets for next season are also good, over 80 per cent.

“But that all hinges on us getting people in for the start of next season on November 20 – if that doesn’t happen, we’ll be back into paying people back and there’s no light at the end of the tunnel.”