England’s battle at No.9 – Alex Mitchell ready to run with big dogs 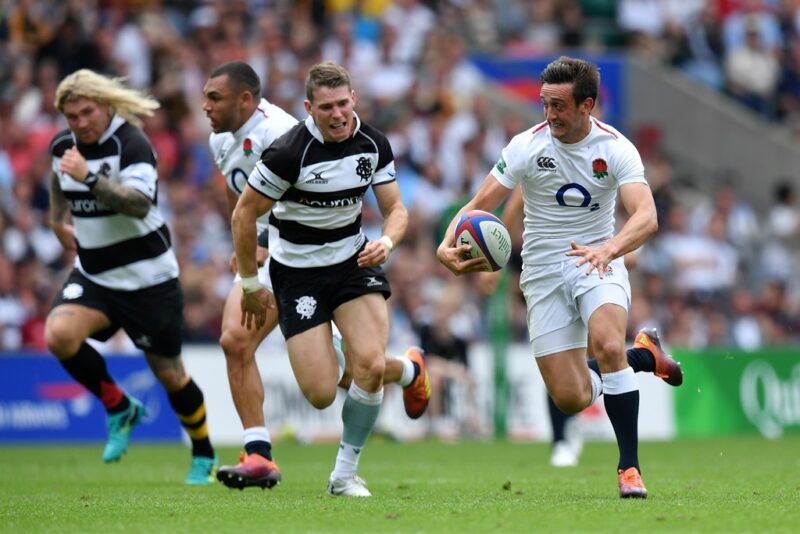 NORTHAMPTON scrum-half Alex Mitchell is determined to make the most of his shock Six Nations call-up by continuing to apply pressure on  Ben Youngs and Willi Heinz.

Whenever rugby resumes, livewire No.9 Mitchell will find himself at the front of a queue of young pivots thrusting themselves forwards for Red Rose recognition.

Youngs shows no sign of fading while Heinz has proved an impressive leader, but both are the wrong side of 30 and at some stage the older guard must change.

Mitchell is battling it out with the likes of Exeter’s Jack Maunder, Harry Randall (Bristol) and Ben White (Leicester) to be new kids on the block, but the Saints youngster clearly has something going for him after being called-up so quickly after recovering from injury.

The 22-year-old had not even played a first team game for Saints after eight months out after tearing a meniscus in his knee while playing for England in an uncapped match against the Barbarians last summer, yet England head coach Eddie Jones issued the recall.

“It was a big surprise,” Mitchell told The Rugby Paper. “I’d not even played for eight months and the last game I’d played before the Six Nations had been in the summer, so it did come out of the blue and it felt pretty weird to go into that camp as an apprentice.

“I was obviously excited to go and it was a huge opportunity. It said I was an apprentice on the squad list, but when you go into camp you’re like any other player who’s training and competing hard for selection, you’re not special or looked after any differently.

“Turning up in camp, there are obviously quite a lot of big dogs across the board, some with vast experience, and Ben Youngs is someone I’ve watched a lot in my career.

“I looked up to him as a scrum-half growing up, while Willi’s a very experienced player as well, so it was kind of weird training with both those guys ahead of the Six Nations.

“It was good to get their thoughts on the game, though, and see how Eddie wanted to play. Seeing how the rest of the squad did things was good as well and everything in that England camp is driven towards how we can get better.

“I didn’t get a game but I really enjoyed being around that environment and it’s improved my game a lot.”

Mitchell’s game time since returning from injury amounted to two Premiership matches against Bristol and Exeter before Covid-19 brought down the shutters.

“At least I got those two games and the England experience,” says Mitchell. “I’d have hated not to have played before the virus struck because I’d been out for so long, so I was lucky in that respect and although it’s frustrating now, everyone’s in the same boat.

“It was such an annoying injury in the Baa-Baas game. I did it after about 60 minutes and ended up missing a holiday in Bali, where I’d been due to go the next day, and the recovery turned out longer than I’d hoped for after having a few setbacks with the knee.

“With that injury, your knee can swell up and get a bit sore, so it pushes things back because the last thing you want is to come back too quickly. We had to be patient and the S&C guys and physios were very good. Right now I’m in a pretty good place for when we resume.”

Mitchell has all the motivation he needs when Saints retake the field. With South African World Cup-winning club teammate Cobus Reinach moving on at the end of the season, Northampton’s first-choice No.9 jersey is there to be claimed.

“It’s been good to learn under Cobus but it’ll be a good opportunity for me when he leaves,” Mitchell said. “You’ve still got to perform and do your best for the team, though, so I’ll just be taking it one step at a time and ensure nothing is taken for granted.

“There’s always competition, whether it be at England level or your club, so my priority is putting my hand up for the club to give myself a chance. I’ve been around that England camp and would like some more.”