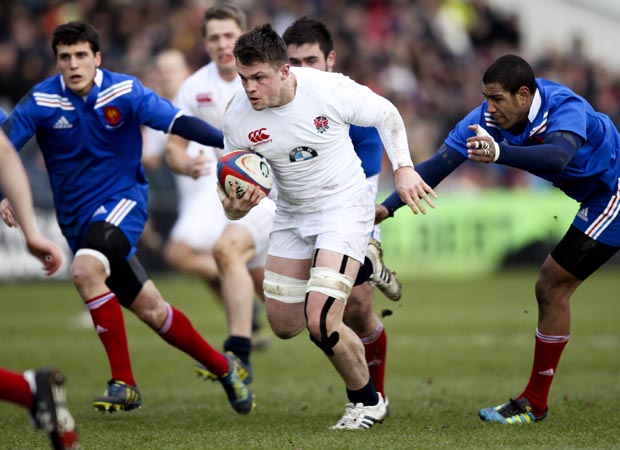 How’s your season going?
Good start playing in the London Double Header and I’ve had other opportunities too. Highs and lows with a few niggling injuries but I’m back on it now.
Last season must have been frustrating?
Yes, getting injured after winning the U20s World Cup in 2013 and being denied the chance to progress like other guys was disappointing. But I got back to play England 7s in Hong Kong and Tokyo, which helped develop my game.
Still look back fondly on that JWC win?
Always will and it’s great to see guys like Anthony Watson, Jack Nowell, Luke Cowan-Dickie, Sam Hill, Elliott Stoke, Ollie Devoto and Dom Barrow making big strides.
Big target now to oust Nick Easter?
There’s no timescale on it but I’ve always wanted his position. Right now I have to play my best wherever they play me, but hopefully I’ll get more time at No.8.
Where did you start in rugby?
Cranleigh RFC minis and juniors. I was a centre back then and used to play against my current housemate, Kyle Sinckler, who played for Battersea. We had some real grudge matches and I didn’t much like him then.
Kissed and made up with Kyle since?
Kyle’s a really nice guy… very different to how he is on the pitch. Everybody says he’s a physical, angry looking guy but he’s pretty chilled at home.
Boyhood rugby idols?
I used to look at guys like Josh Lewsey and Jonny Wilkinson, but as I went into the back-row I paid more attention to Richie McCaw and Neil Back.
Why did you shift from centre?
I got bigger and decided I’d be more suited to the back row. But it’s handy having the centre skills to go with it.
Current No.8 you most admire?
Kieran Read’s an awesome player. Great hands, great footwork, really physical… the benchmark to aspire to.
Played any other sports?
Bit of football and cricket, but I mainly favoured athletics at school. I was good at javelin, shot-put and discus, plus I was decent over hurdles.
If you could be another sportsman?
Peyton Manning. I love watching American Football, the money’s good and whenever we throw a ball around at Quins it’s good fun. Awesome sport.
Born in Australia, weren’t you?
Yes. My mum and dad met in Kenya and then moved to Oz. My brother and I were both born in Brisbane but we only spent a few years there.
Best place visited?
Thailand’s Ko Phi Phi islands, the nicest, most beautiful place you can imagine. Beaches, palm trees, great food – perfect place for a night out.
Interests outside rugby?
I play a bit of online poker but mainly enjoy cooking. I can knock out a few decent curries but if I’m cooking for myself it’s generally shepherd’s pie or spaghetti Bolognese.
If you could invite three special dinner guests?
Mike Tyson, to make Kyle Sinckler jealous; Martin Johnson, an England legend; and Lewis Hamilton.
Best advice received?
Don’t force things when you’re trying your hardest anyway, because that’s when it gets into your head and you start doing things wrong.
Pet hates/annoyances?
The way Kyle Sinckler blows his nose! Nobody else I know does anything like it – it’s like being with an elephant!
Best and worst banter at Quins?
Sam Twomey’s easily the worst and tells terrible jokes. Best is Jordan Turner-Hall, who’s a very funny guy, and you’d have to put Danny Care and Joe Trayfoot up there.
Best and worst dressed?
Nick Evans takes a lot of stick and Twomey dresses like a 50-year-old as well. Best are our fancy dan wingers, Ollie Lindsay-Hague and Ugo Monye.
Targets for the season now?
To work my way into the Harlequins 23 on a regular basis and push for that starting spot. I’m desperate to make up for lost time.