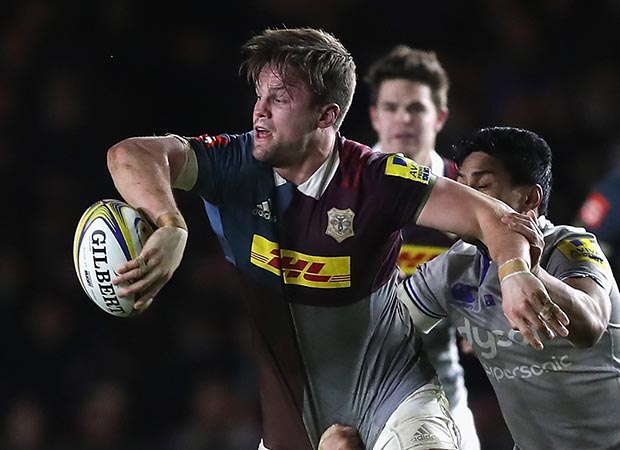 Jack Clifford believes he has returned stronger and fitter than ever following an eight-week injury lay off that forced him to watch his England team mates take their unbeaten run to a record-equalling 14 Tests.
Clifford suffered an ankle injury at the start of a season that was supposed to confirm his position as one of the brightest back row talents available to England head coach Eddie Jones.
Instead, he joined a ridiculously long list of crocked England back row forwards headed by James Haskell.
Billy Vunipola joined the fallen following his knee cartilage operation which removed him from England’s win over Australia which completed a clean sweep of victories.
Harlequins forward Clifford had worked so hard with the club’s medical and conditioning teams that he returned to action three weeks early and promptly won the man of the match as Quins beat Bath 21-20.
Jones, who was at that match deciding on who would wear the No.14 jersey against the Wallabies, was so impressed with Clifford he added him to the squad only for concussion, suffered in the final moments of the Bath game, to ruin any hopes of a swift Test comeback.
While that call up from England was a confidence boost, the head injury only increased Clifford’s feelings of frustration.
Not only was he denied the chance of helping inflict a fourth successive defeat on the Australians, he saw Nathan Hughes, produce a big performance to confirm his position in the back row pecking order.
Now, as he heads into the New Year and England’s bid to defend their Six Nations title, Clifford is determined to deliver eye catching displays for Quins to boost their European campaign and move them up the Premiership table.
Clifford, 23, unbeaten after winning eight England caps, told The Rugby Paper: “I was three weeks ahead of schedule with my comeback and I was really pleased to get back for the Bath match.
“I pushed myself hard and the aim was to come back stronger and better than when I was injured and it drives you on during the rehab.
“I really missed being with my Quins and England team mates and I was gutted that I couldn’t turn out for the club against Saracens and would have loved to have been involved. The fact we won made it even tougher to take although I was delighted for the boys. There were a number of back row injuries and I just think it was bad luck and you also saw England lose wingers Anthony Watson and Jack Nowell. We play an attritional game and these things happens.
“After the Bath game I was called in the England camp and although the HIA meant I couldn’t train, it was great to see how things were going. Everyone was in a good place and while the training was very physical, the guys were really enjoying it.
“With the Aussie game coming at the end of the Autumn series, all of the players were really pushing themselves hard.
For now Clifford’s priorities lay with his club, adding: “My focus is on playing for Quins and I haven’t thought about anything else and we have European matches and the Premiership, including the Big Game at Twickenham.
“At Quins we want to be moving up that table, getting away wins and challenging for honours and it’s great to have the England boys back. I do have a New Year’s wish, but if I revealed it then it wouldn’t come true!”
NEALE HARVEY