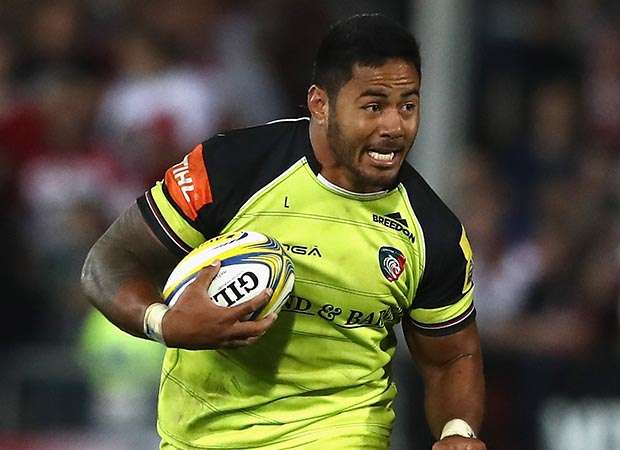 Richard Cockerill has no doubt Manu Tuilagi will recover from his latest injury setback and will stick by him until he does.
The powerful centre has spent most of the last three seasons on the sidelines with shoulder, groin and hamstring injuries. During that time, he missed 31 of England 36 Tests and played in only 27 of the Tigers’ 103 games.
He started the Premiership season fit with a try-scoring display at Kingsholm for Leicester’s epic comeback win but ended the game with cramps and hasn’t featured in the Tigers’ last three matches.
Cockerill confirmed he is likely to be out for six to eight weeks with another hamstring issue, ruling him out of England’s Autumn Internationals and sparking fears his career could be on the decline at the age of just 25.
“Manu will make a full recovery,” Cockerill told The Rugby Paper. “He’s a world-class player and he will be fully fit at some point – but we’ve got to be patient.
“Groin injuries are notoriously difficult to get rid off and he’s always had a tendency to get injured there because he’s so powerful through his hips and his core.
“He’s always had that problem from a young man and it’s the same issue his brother Alesana had, as did Mathew Tait and Martin Castrogiovanni.
“Manu’s been unlucky with injuries but it’s one of these things we have to deal with.
“This time it’s nowhere near as bad as before – he missed England’s tour to Australia due to a hamstring injury – and he’ll recover 100 per cent. He’s working hard in rehab and when he’s right he’ll be playing.”
It’s not the first time Cockerill has had to nurse one of his star players back with the likes of Tait and Tom Croft spending extended time on the sidelines  in recent seasons.
But the Tigers boss is not one to give up on his players – he stuck by that duo and he will do the same with Tuilagi.
And to prove it, last season he gave Tuilagi an improved contract extension, reportedly worth £400,000 a year to stay at Welford Road despite the uncertainty over his playing future.
Cockerill added: “My view is that when a player plays for you and breaks himself playing for you, that is the club’s responsibility to put it right.
“For me that’s an important part of the responsibility as a club and that’s a really strong message. As a club, we’re not fickle in that way that we just cast aside a player because they have issues.
“If he breaks himself and it’s likely it’s going to be the end of him then that’s a different discussion to have, but Manu will be back as Mathew Tait and Tom Croft have.”
NICK VERDIER