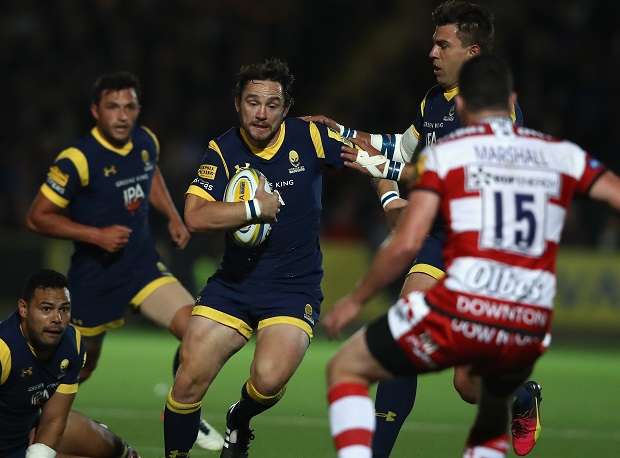 Ryan Lamb is relishing his opportunity to lead Worcester’s attack after being brought in from the cold following Dean Ryan’s departure.
Free-spirited Lamb has always endured a love-hate relationship with Ryan, who was suspicious of his maverick nature from the pair’s time together at Gloucester.
However, having been restored to the starting No.10 jersey under new boss Carl Hogg, the 30-year-old is determined to take his chance.
Lamb explained: “It’s been really exciting to get back in the mix because last year, no matter how well I played, I’d never have got a start under Dean.
“Dean’s a world-class coach, everyone knows that and I respect him, but he had a vision that didn’t have me involved, which was always a bit frustrating.
“With Dean, if you got on the wrong side of him it didn’t matter what you did, but it’s nice to have a fresh start now and a blueprint for the squad under Carl is that if you’re playing well every week, you’ll end up being picked.”
An effervescent ball player by nature, Lamb has toned down his high-risk approach but insists he retains a healthy devilish streak.
He explained: “I’m maybe a bit more controlled than I was but I still like to play the game at high-tempo and get the ball moving when I can.
“I’m not too sure I want to be classed as a maverick, but I grew up looking at Carlos Spencer and the way he played the game was fantastic.
“I am a bit of a high risk taker, but the way I’ve always played the game is to be entertaining and try and score as many tries as we can.
“That’s the blueprint Worcester want to play and that suits me down to the ground.”
Worcester must silence their doubters and Lamb feels they have the squad to do it – if they can get their best players back fit.
He added bullishly: “Everyone sees Worcester as bottom three but we want to change that and if you look at our squad, we’re a match for anyone.
“Chris Pennell, Ben Te’o, Wynand Olivier, Francois Hougaard and Bryce Heem are fantastic players, we just haven’t seen them play together yet.
“We’ve had top players injured but as you saw against Gloucester, when we held them with 14-men, our potential is massive.”
Meanwhile, Lamb welcomes new scrum laws promoting faster ball but reckons lengthy interventions by television match officials are ruining games.
He added: “Being allowed to play the ball from the back of a scrum rather than being called back for constant resets is great, but they’ve speeded up the game one way and taken it away with another because TMOs are reffing games.
“It’s like a third eye and we’ve gone way over the top; the time it is taking frustrates players and fans and even then they don’t always get it right.
“The forward pass from Marland Yarde against Bristol was definitely forward, yet the guy looked at it 20 times and still gave the try. You simply can’t have games being reffed by guys in vans.”
NEALE HARVEY