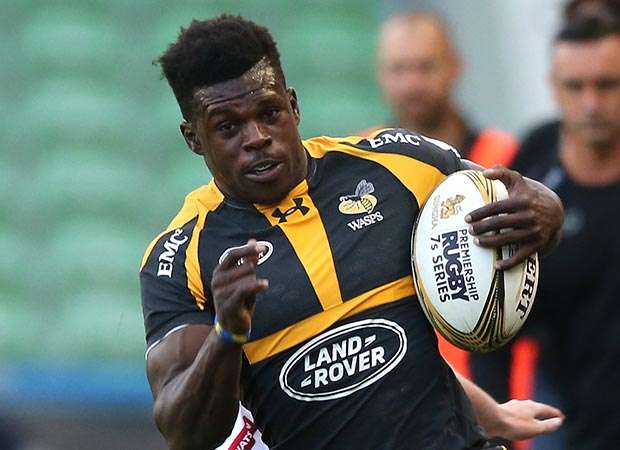 Eddie Jones says Christian Wade must keep  improving his defence if he wants to break back into the Test side.
Wade is hoping his excellent end-of-season form could book him a ticket on the plane for the three-Test series in Australia.
The 24-year-old is desperate to return to the international stage and add to his solitary test cap which came in Argentina three years ago.
However, despite his  six-try display against Worcester Warriors, and the blistering pace he showed for Wasps in their Champions Cup semi-final, Wade look like missing out again.
Jones said: “Christian Wade has definitely got gas. He’s got to keep working on his defence, keep scoring tries and you never know what is around the corner.
“He’s got a lot of guys ahead of him but if he doesn’t go to Australia he goes to South Africa with the Saxons.”
Wade, 24, also has his sights fixed on trying to win Olympic gold with the Great Britain Sevens team.
Jones adds:  “I don’t pick the Sevens but he certainly has the gas to play Sevens. But it’s a bit like playing Test cricket and the Twenty stuff. They are two different games, and so are Sevens and fifteens.
“The strength and conditioning you need for Sevens is completely different from fifteens, and so is the skill set.”
“If Sonny Bill (Williams), the most gifted footballer I’ve ever seen, is struggling I I don’t think there is much chance for the other guys.”
Jones has challenged his England players to win 15 places on next year’s Lions tour of New Zealand.
Ten Red Rose men were  among the 37 players called up for the 2013 tour of Australia. Now Jones is hoping his men dominate selection for the next tour.
He said: “As much as I’d like to coach the Lions, I’ll be going to Argentina with England in June 2017, hopefully with a very weakened team.
“My contribution to the Lions is to make sure we’ve got 15 players to make the Lions stronger at the end of next year’s Six Nations.”
GARY FITZGERALD