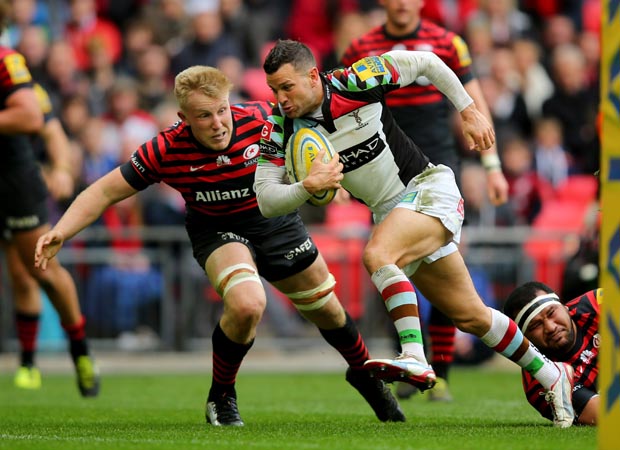 Harlequins scrum-half Karl Dickson has revealed how he aims to follow the lead of New Zealand’s Glen Jackson by becoming a top class Test referee.
Dickson, who admits to being a “terrible moaner” at refs as a player, took up the whistle in March and has turned poacher-cum-gamekeeper after refereeing lower league games.
His Quins contract is not due to expire until 2017, but after that the 32-year-old hopes to be fast-tracked on to the RFU’s panel of elite referees – just as former fly-half Jackson was by the NZRU when he returned home from his stint at Saracens in 2010.
Dickson told The Rugby Paper: “A career in refereeing has only become apparent to me over the last year. I saw Will Skinner have a go, that grew my interest and since then I’ve done all the courses and I’m really enjoying it.
“If I’m honest, I’m a terrible moaner at referees so it’s interesting to be on the other side. I have gained a greater appreciation of refs and the decisions they make, particularly at the breakdown, but as I’m still playing I’m still going to moan!
“It’s been really good so far. The London society have helped me massively and I speak to (ref academy boss) Chris White a lot. JP Doyle and Luke Pearce have offered their help  and Wayne Barnes has been to see a couple of my games.
“It’s completely different for me, trying to be calm and collected as a ref rather than going all out when I’m playing, but I’ve done six or seven full games now and Quins have been great in allowing me to fit games around our weekly schedule.”
Dickson officiated at London Irish Amateurs 2nds v Old Elthamians 2nds last week but has designs on going far higher, adding: “The ultimate goal is to go straight into top level refereeing and look to ref at international level in the coming years.
“I’m getting some banter off the Quins lads but Glen Jackson showed the way and the RFU are massively behind me. They’re looking to fast-track me and the more guys you can get reffing who have played the game, the better.”
Dickson is not alone in taking up the whistle. Former Saracens, Racing Metro and London Scottish flanker Ben Russell was last week forced to retire due to a neck injury but also hopes to take the fast-track towards refereeing.
Russell, 31, told TRP: “It’s a bit scary because playing rugby came naturally, whereas now I’ll have to learn to be on the other side of the whistle. But I want to stay in the game and if I think I can make it, this will probably be the way to go.
“I played with Glen Jackson at Sarries and he’s very good. I know the game and if I’m competent I’d like to go all the way. Reffing a Test match one day would be amazing.”
NEALE HARVEY