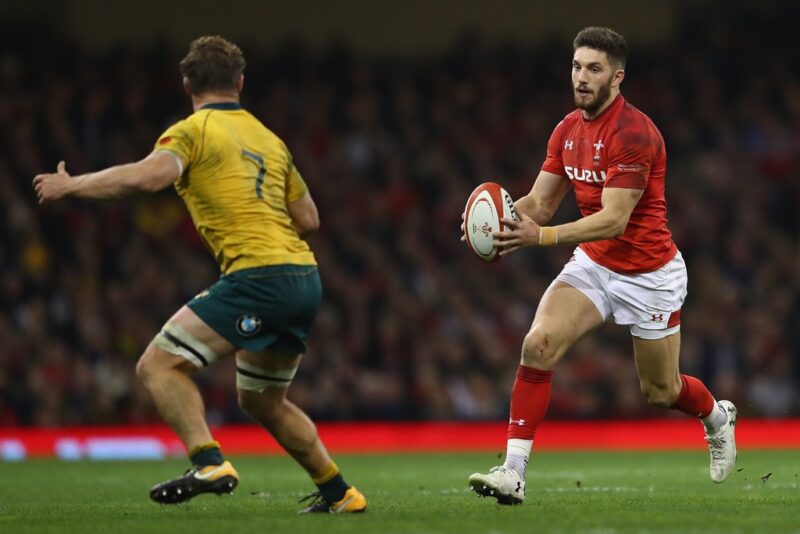 RUGBY IS A very fickle business. One minute you’re a Grand Slam winner, starring at the World Cup, and top of the tree. The next your international career can abruptly come to an end.

Hadleigh Parkes’ imminent move to Japan is a big blow for Wales. The same is true of Owen Williams’ deciison to quit Gloucester and join him there. Wayne Pivac is not blessed with centre options and it is a position of weakness now in the national set-up.

I’m sure there will be criticism of Hadleigh for making this decision. You can’t please everyone in Welsh rugby, but I think anyone laying into Hadleigh for moving to Japan would be out of order.

Of course there will be disappointment as Wales will be losing their starting inside-centre, but I can understand the reasoning. Hadleigh is 32 and he’s at the stage in his career where he’s wondering how long he’s going to be first choice. It is doubtful he will make the next World Cup – to play at that level at 35 or 36 is very difficult.

The timing is right for him. I’m sure he will make a lot of money in Japan and that will have factored large in his thinking. He has a young family to look after and rugby is a short career.

When Hadleigh arrived from New Zealand to play for the Scarlets in 2014 I doubt playing for Wales would have been on his mind, but he has proved an excellent addition to Welsh rugby at both regional and international level. There will be people angry that he is now turning his back on Wales, but that view is wide of the mark. Hadleigh has always been 100 per cent committed to the Welsh cause.

I’ve no doubt in my mind he is a ‘Welshman’. He has put his body on the line time and time again in the red jersey, just look at last year’s World Cup. He had a series of niggling injuries at that tournament and he always strapped them up to perform for the team.

Anyone doubting his commitment to Wales is just plain wrong. It’s not a case of Hadleigh just deciding he’s had enough of Welsh rugby and I’m sure it would have been a very tough decision for him given he’s made a name for himself in Wales. And as a Wales fan I’m very grateful for the service he’s given to rugby in our country.

Speaking from my own experience I know very well how a career in sport is all about timing. The opportunities you get can come and go and Hadleigh has a chance to extend his career.

I can understand why the Scarlets only offered him a one-year deal. From their point of view it made smart business sense. They have some very good young players coming through in Llanelli and in two years Hadleigh will be 34 – when you get to that age you’re not going to get any stronger or faster and you have the young whippersnappers nipping at your heels. It’s not a nice place to be. Trust me, I’ve been there!

Hadleigh probably sensed that’s the case so no criticism should be laid at his door. I’m sure he’ll do very well in Japan as foreign centres always seem to do. The game there is less physical and Hadleigh is a great ball carrier. He will have plenty of joy in the Far East and I wish him well.

At a time when Wales lacked midfield options he came in and has been a huge success, giving his all for his adopted country. No one can take his achievements in the red shirt away from him.

I am more disappointed at the prospect of Wales losing Owen. I think he would have been a perfect replacement for Hadleigh with Wales and at the Scarlets.

If I’m being brutally honest I don’t think Hadleigh has been playing his best rugby in the last six months or so and he’s maybe struggled for form and fitness since the World Cup.

Owen is a very good player but he has been unlucky with injuries. At 28 he is in a different age bracket to Hadleigh and still has a lot to give.

I’d have much preferred him to come back to Wales from Gloucester and fight for an international spot than move to Japan.

I don’t think he’ll ever play for Wales again now. When you go to Japan there is no real coming back and he can wave goodbye to Test rugby. That is a real shame.

Of course we don’t know what’s happened behind the scenes in terms of the negotiations with Owen. I’m sure he will earn more money in Japan than he could have done in Wales and given his injury record that will have been under consideration, but he is still young enough to offer plenty if he can stay fit.

He would have fitted perfectly into the style of rugby Pivac wants Wales to play. I’m sure Wayne will be disappointed to be losing two of his Six Nations squad members, but he will have to move on and quickly. We know Wales haven’t been blessed with centre options, but if I was a young midfielder I’d be looking at this as a huge opportunity.

Owen Watkin is the first name that springs to mind. He’s been around the Wales side for a while now and this is a big chance for him to become first choice inside-centre.

The emergence of Nick Tompkins in the Six Nations was a big boost for Pivac and he looks like he’ll be around the squad for a long time now.

I’ve made it clear in some of my previous columns how impressed I was with Tompkins’ resilience in his first few Tests. He played at 13 in the Six Nations, but I think he could also fit in at 12 moving forwards. Tompkins and Jonathan Davies would be my preferred pairing for whenever rugby does resume.

Watkin will be pushing those two hard I’m sure and there will be other players coming through. Willis Halaholo will be in the frame and I also like young Kieran Williams down at the Ospreys. It’s a reality of professional sport that players come and go and while Wales look set to lose Hadleigh and Owen, they have kept hold of Ross Moriarty.

The priority for me was for Ross to stay in Wales. At 25 he’s in the prime of his career so it would have been gutting to lose him to England or France. In the end he’s decided to stay with the Dragons and that’s a good move. Ross is the sort of player who can drive the region forward.

Dean Ryan would not have re-signed Ross if he felt he wasn’t totally committed to the cause and was only it in for the money. Dean is not that sort of director of rugby. He’s very canny.

Ross’ fresh deal is good news for Welsh rugby. Hadleigh’s and Owen’s departure is less so, but this is the nature of the beast. Wales will survive without them.