Posted on 22nd October 2020 by admin in Latest News, Premiership 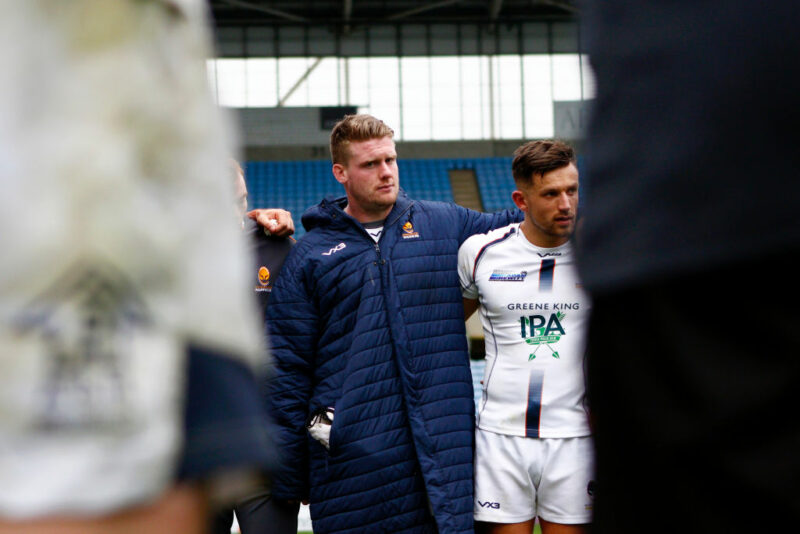 Niall Annett must be one of the most respected and admired characters in the Worcester Warriors dressing room.

The Northern Irishman, who moved to Sixways from Ulster in the summer of 2014, enjoyed a fabulous start to life in the blue and gold, helping Warriors get promoted back to the Premiership at the first time of asking. His first two seasons saw him rack up 43 appearances in no time, and all seemed to be going well.

But sport can be cruel sometimes, and in November 2016, Annett picked up an ankle injury against Northampton, keeping him sidelined for three months. On his comeback game – ironically at Northampton – the hooker sustained a concussion, followed by a hamstring injury in the pre-season.

This unfortunate run meant that Annett missed 18 months of first-team action – and at times wondered whether there would be light at the end of the tunnel.

But the front rower battled the demons and, through hard work and dedication, finally returned to the first-team fray in September 2018. Two years on, he is enjoying his rugby again and has his sights set on becoming the first Irish Warriors centurion, sitting on 90 appearances to date.

“I’m 29 and I’m just really appreciating my rugby at the moment,” said Annett. “There are no guarantees in rugby and during those 18 months of injury it didn’t look like I was going to play many more games, so it would be very special to reach the milestone, especially because of what I’ve had to go through.”

But while Annett is enjoying life on the field, he is a busy man off it, with two passions taking up plenty of time. His main one is coaching, while another big one is his podcast Wind Yer Neck In.

Explaining what made him want to set it up, Annett says: “I just love a chat! I’m interested in the media and the podcast allows me an opportunity to have some interesting conversations.

“Some of the people I’ve spoken to and the content I’ve managed to get has been so energising. The opportunity to speak to (former All Blacks coach) Steve Hansen, who in no other world would I have had the chance to sit with for 60-90 minutes, and pick his brain was incredible.

“I had to record it at 11.30pm because of the time difference. I remember being sat in the dining room after we finished and was amazed by how open he was. I listened to it back straight away, which I don’t normally do, but with that one I did because there was so much great content from one of the best coaches in the world.”

His podcasts have required a lot of work, especially in persuading some of rugby’s top names to ‘chew the fat’ with him.

“You’ve got to try and pitch to people why you’re doing it and why it might be of interest for them to come on,” explained Annett. “One that stands out was Stuart Lancaster. It took weeks to convince him that it was a genuine opportunity for me to learn as a young coach.

“For someone of his calibre, with the things he’s done and seen in rugby, to take the time to have a chat with me, means the world. It was a catalyst for a lot more of the top personnel coming on. The chat with Nick Mullins really scratched an itch as I got an insight into what he does on a gameweek as a commentator, and then I had the chance to catch up with my old pal Donncha O’Callaghan.”

Annett is lending a helping hand to local amateur club Worcester Wanderers RFC, and he believes the knowledge he’s collecting from his podcast chats are invaluable to what could be his next move when he’s forced to hang up his boots.

“Coaching is my passion, and the media,” added Annett. “I love talking and breaking things down so the podcast chats have been amazing for that. I’m doing my level-three coaching at Wanderers and I love mixing with the boys who have rocked up from being at a building site all day or selling houses.

“They eat their dinner in the car and then step on the field because they enjoy it. They’re not there because they’re motivated by money, the pressure of performances, TV cameras and egos. It’s the purity around it that I get a lot out of.”

With the Warriors having recently had a coaching overhaul, Annett ackowledges the impact of new scrum and assistant forwards coach Mark Irish.

He said: “‘Iro’ has replaced Mefin Davies who is one of the best coaches I’ve ever worked with. But Iro’s level of technical detail at scrum-time has been incredible. He has really impressed and is someone who demands a lot from you.”

Worcester have placed a lot of emphasis on their youth and Annett believes it’s an exciting time to be at the club, insisting that some of their young talents are destined for great things.

He said: “If you’re a 19 to 21-year-old English-qualified player, there aren’t many other clubs offering opportunities like Worcester. Ted Hill is someone who’s had to grow into the captain role quickly but he’s certainly adapted well and both he and Ollie Lawrence have all the ability to go and be British & Irish Lions.

“Rugby is a pretty cruel sport though so there are going to be challenges in the futures of their careers where they’ll need to be looked after, due to things like injury and form, but they have the potential to be Lions, not just in the future, but the very near future.

“It’s a super exciting thing to be part of when you’ve got guys of that age who are consistently rocking out performances in the Premiership where seasoned 27 to 35-year-olds would struggle. Will Butler has the ability too but needs an injury-free run. Noah Heward stepped into the team and has put in some brilliant performances and shown that he’s a quality footballer, while someone else who’s sitting under the radar is Joe Morris. He’s got everything to be top-quality and I’m desperately hoping he’ll see the potential he has – as a tighthead, he can do everything.”

While Annett also spends plenty of time with his schnoodle Benji and recently celebrated his first anniversary in lockdown with his wife, he is a level-headed individual, set on playing rugby for as long as he possibly can.

“I watch my videos back and there’s so much I want to get better at,” he said. “The sole rugby focus is to continually get better so that I can play for as long as possible and have an impact and influence on young-er guys who want to learn.”

No matter how long Annett’s playing career lasts, he will be on the rugby scene for many years to come in some capacity.