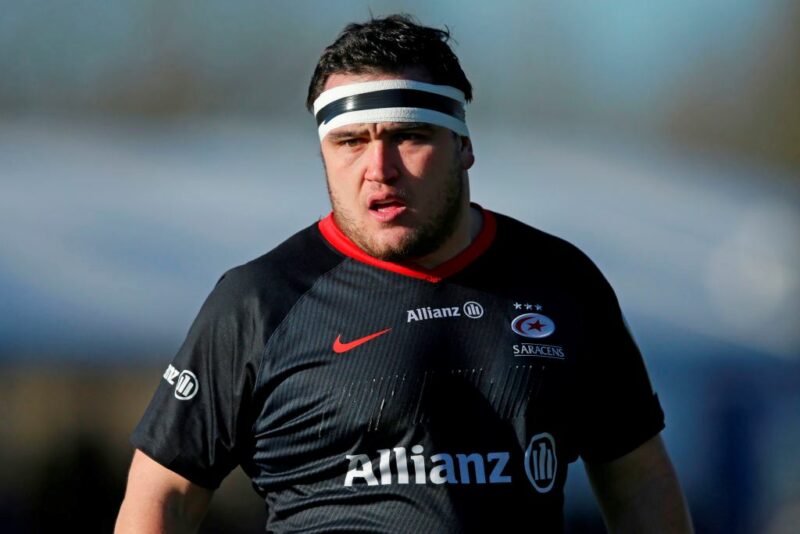 AFTER five or more months on a starvation diet, all sorts of tasty rugby delicacies are being offered up at present. It’s almost too much for our stressed digestive systems especially as first we have to consume the leftovers from last season, sorry this season.

Some are more palatable than others. I have lost all appetite for the 2020 Six Nations, it now seems a bit of an irrelevance, an ill-starred tournament that should probably have been ended after Round 3 with a large asterisk indicating the unfortunate circumstances in the record books.

The Gallagher Premiership meanwhile is the English game’s bread and butter and although some of the games post-lockdown have been a little stodgy and half baked, others have risen splendidly to the occasion. The main thing, of course, is that Premiership rugby is back on the menu.

But the European Champions Cup? Now that is genuinely exciting and suddenly seems to be upon us after months of uncertainty although after everything that has happened nobody is counting their chickens.

It still seems probable that the matches in Dublin and Exeter will be behind closed doors but there is a chance of a ‘crowd’ for the two games in France where there is currently carte blanche for up to 5,000 fans. In addition you can apply for special dispensation to the local prefecture to increase that and that’s exactly what Clermont have done for tonight’s T14 game with Toulouse when 10,000 will be allowed into Stade Michelin.

If that goes off without alarm it is reasonable to expect a similar crowd, or possibly even larger, will be allowed in for their quarter-final with Racing and, as a knock on, Toulouse might feel encouraged to apply for a similar dispensation for their game with Ulster. Hitherto Toulouse has been something of a Covid hotspot and the authorities have discouraged such applications but it’s a changeable situation.

The competition this year has thrown up four intriguing quarter-finals but the game that towers above all others is surely Saracens’ visit to Dublin to tackle Leinster. The prospect of Saracens rounding off an extraordinarily painful and chastening season with one last defiant hurrah is an enticing one, but their preparations took a turn for the worse yesterday with the dismissal of Owen Farrell for a high tackle in their sloppy home defeat againt Wasps.

Farrell, who had made a leisurely start to what could be 12 months of continuous rugby, seems likely to face a ban for his ill disciplined tackle and his availability for the quarter-final at the Aviva must be in doubt.

That would be a huge blow with presumably Alex Goode being asked to step up to fly-half but we have learned not to write Saracens off when their backs are against the wall. They have already fought their way out of a brute of a pool at the height of the salary cap controversy and now, even denuded of a number of departing players, Saracens will be intent on proving themselves the best team in Europe for the fourth time in five years.

Saracens will want to leave the message that their winning had very little to do with money and was almost totally connected with them being a better, tighter team than the opposition.

Which all sounds great in theory but to achieve that they must first defeat a seemingly bullet proof Leinster side who were unbeaten throughout the pool stages and unbeaten during the regular season of the PRO14.

With their large squad of centrally-contracted stars Leinster can hardly claim to have lost out to Saracens in recent years on financial grounds – the Irish mega-province are the envy of most of Europe in that respect – so the rivalry is a pure rugby thing.

In head to heads, they hold the upper hand. Although they lost the 2019 final 20-10, they can reflect on an impressive 30-19 quarter-final win the previous year while, going back a little, they did the double over Saracens in the 2010-11 tournament.

Saracens are aware of all this but despite various summer departures – some long planned such as George Kruis and Will Skelton, others short term loan deals – the core of their European Cup-winning teams remains in place although Farrell’s dismissal threatens that. Maro Itoje and the Vunipolas in particular have started the season with a bang, Jamie George has been ticking over nicely while skipper Brad Barritt and Richard Wigglesworth have just a handful of Sarries games left in their careers and are hungry, while Goode won’t be heading to Japan until Europe is done and dusted.

No player movement of any consequence during lockdown. At one stage there was bad news concerning world class lock James Ryan who seemingly faced 12 weeks off after shoulder surgery and was predicted to miss the start of the Six Nations. However, Ryan appears to have made a remarkable comeback and has been training with the team during the last fortnight. He could yet make the quarter-finals while it seems that barn-storming flanker Dan Leavy is also poised to return after a career threatening knee injury. Leinster hit the ground running again last month on resumption with victories over Munster (27-25) and Ulster (28-10) to finish the regular season of 15 matches unbeaten.They then secured their final spot on Friday night with a hard earned 13-3 win over Munster.

A huge raft of player movement has accompanied Saracens’ ‘relegation’ to the Championship, but they have shuffled the pack as best they can. Of the players farmed out Ben Earl, Nick Tompkins, Alex Lozowski and Nick Isiekwe would have featured in their match-day 23.

Ben Spencer joining Bath was a bit of a blow but they already knew George Kruis and Will Skelton would be leaving.

Since losing in the last minute at Bristol on the season’s resumption they have reeled off wins over Quins (38-24), Gloucester (36-20) and London Irish (40-12) before following up defeat to Wasps with a win over Exeter at the weekend.

Director of rugby Mark McCall has taken the opportunity to give the big names valuable game time while also bedding in the stalwarts of their core Championship side for the coming season after the Champions Cup is all said and done.

Continue to dominate the Premiership and, if anything, look even stronger than before the lockdown.

Added a couple of high quality Scottish signings with Scotland lock Jonny Gray arriving from Glasgow to make an immediate impact while the underrated Sam Hidalgo-Clyne has looked instantly at home at scrum-half and will surely start challenging again soon for Scotland honours.

Hidalgo-Clyne and Jack Maunder will share duties at No.9 and face a big task in replacing the influential Nic White, who was a key playmaker before he returned to Australia.

Have struggled to find their feet since the resumption with defeats against Wasps, Bath, Quins, Exeter, Leicester and just the solitary win at London Irish (27-3).

Badly need to hit top gear for the visit to Exeter but are clearly missing Springbok Cobus Reinach who provided the stardust and pure gas which transformed promising attacks to try-scoring plays.

Saints have the creativity but currently they don’t possess the finishing power to threaten the top teams. Realistically their best hope will be a massive performance from their pack with Courtney Lawes to the fore and the hope that Dan Biggar can produce one of his top flight performances at fly-half to control the game and kick a barrowload of goals.

Finished a nondescript sixth in the curtailed Top 14 last season – the French authorities made no attempts to finish their domestic season – although Clermont, like Toulouse, will argue that with their dedication to the European Champions Cup they were pacing their domestic season and had planned a big finish and a full-on campaign in the play-offs.

Have waved goodbye to David Zirakashvilli, Nick Abendanon and Isaia Toeava and their only lockdown signing of note has been flying Japan wing Kotaro Matsushima.

Clermont were pretty solid in the qualifying pool, winning five of their six games to finish as the fourth seeds but now have just two games – at home to Toulouse tonight and away to Bayonne next Saturday – to get back into the swing.

Just one big lockdown development and that was the signing of Kurtley Beale to augment a back division that already includes X-factor players like Finn Russell, Simon Zebo, Teddy Thomas, Juan Imhoff and Virimi Vakatawa.

It’s both scary and exciting to think what that backline might produce if they decided to fire up one evening.

Racing, who have opened the new Top 14 campaign with two wins from two, are many punters’ favourites but having to qualify from a pool including Saracens and Munster was tough and although they came through as pool winners they were only seeded fifth meaning they now have a tough assignment at Clermont.

Lockdown came at a bad time for Toulouse who really seemed to have the bit between their teeth in Europe after winning all six games in the pool to qualify for the knockout stages as third seeds.

Having won the Top 14 in 2019, the European Champions Cup was their absolute priority this season and they were lasered in on becoming the first team to carry it off on five occasions.

Outwardly there has been little activity in the last six months other than to strengthen their resources at lock by signing Richie Arnold and Belgium’s Thibaud Flament, the latter from Wasps.

It seems they are more than happy with their existing squad which is headed by Cheslin Kolbe and Romain N’tamack in the backs while their pack has plenty of old-fashioned grunt and the ageing class of Jerome Kaino.

Face the hard task of travelling to Toulouse after falling to the PRO14’s unstoppable force, Leinster.

Head coach Dan McFarland rolled the dice by starting captain Iain Henderson at the Aviva Stadium, and is sure to go again at Stade Ernest Wallon.

Elsewhere there is much else to look forward too. On the Saturday the second quarter-final sees the all-singing, all-dancing Racing side travel to Clermont who have been erratic in the T14 but are a different beast at home in Europe. Despite that, I would expect Racing’s star-studded team to prevail.

On the Sunday it is difficult to make a case for Ulster causing an upset in Toulouse but such comments will act as a red rag to the Ulstermen and French complacency is the biggest danger for a Toulouse side aiming to secure a record breaking fifth European title.

Equally there is a clear favourite when Exeter host Northampton who have been finding life difficult either side of the lockdown. You could make a very strong case for Exeter now being the outright tournament favourites and Rob Baxter, well aware that his side have sometimes failed to reach the heights in Europe, will have them properly revved up.

Saints, with Dan Biggar at the helm and Courtney Lawes, left, putting some stick about are well capable of a huge one-off performance and that is what Chiefs will prepare for, not the misfiring unit that has been struggling in the Premiership recently.