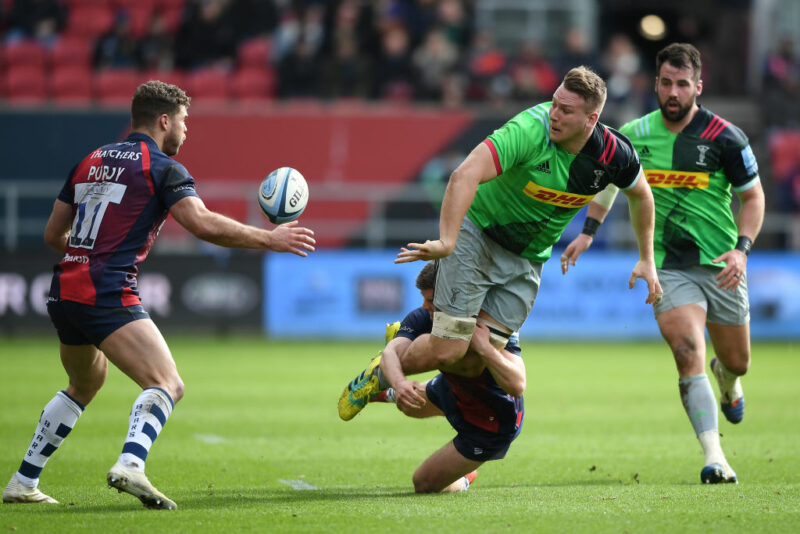 THIS Team of the Premiership so far reflects the homegrown talent in the English top league, as well as the imports from around the globe who have made their mark.

The selection is based on form over the 13 games played until the coronavirus suspension in March, and also on the impact players have made in whatever time they have had at club level due to either injury or international calls.

It has resulted in a split almost down the middle, with eight English players and seven overseas – or over-the-border in the cases of Welsh wing Louis Rees-Zammit and Scottish full-back Stuart Hogg.

It is based on form, not just in the Premiership, but also on the pool stages of the European Cup and European Challenge Cup. League leaders Exeter have the biggest contingent of four players, with the remaining top five sides, Sale, Bristol and Wasps with two selections each, and Saracens, Harlequins, Leicester, Northampton and Gloucester one apiece.

It was an extremely close call in almost every position, with four South African imports missing out narrowly – namely, the Exeter duo of lock Jannes Kirsten and back rower Jacques Vermeulen, and Sale’s loose-head Coenie Oosthuizen and blindside tackle supremo Jono Ross.

There were also fine margins at half-back, with Bristol’s 9-10 partnership of Harry Randall and Callum Sheedy in the mix along with the Quins pairing of Danny Care and Marcus Smith. At scrum-half Nic White (Exeter) and Derrick Hougaard (Worcester) had a good case, as did Dan Biggar (Northampton) at fly-half.

Genge’s scrummaging has been as dynamic as his carrying in the loose, and it was set-piece gains in the Premiership that saw him cement his England place in the Six Nations. The Leicester loose-head has shown this season that he can walk the walk and talk the talk.

The Exeter hooker has found an extra gear since the World Cup, and has been a powerful all-round presence for his club. Cowan-Dickie is the most lethal driving-maul try monster since Neil Back, and the throwing yips have gone.

The Kiwi tight-head is still going strong at 36, and provides the crucial bedrock to the foundations of the Bristol pack. His experience has helped to weld the Bristol scrum together, his tackle counts match those of props ten years younger, and he handles like a back.

The rangy Exeter lock is pushing hard for international recognition, not just because of his ability as a line-out jumper, but because his work-rate is exceptional in defence and attack. Hill has good hands and speed, and covers acres of ground. Edges out Chris Vui.

Has been a virtual ever-present and, after moving into the second row, the Springbok has become the main piston driving the Sharks pack forward. The 24-year-old’s grappling strength and appetite for work paid off in a highly effective driving maul.

Willis jump-started the Wasps revival as the Premiership’s turn-over king with a phenomenal 28, almost double that of his nearest rival, Blair Cowan (15). But flanker Willis has more strings to his bow, showing his carrying prowess by crashing over for eight tries this season.

A brawny, rugged openside with the handling and versatility to switch to No.8, Earl forced his way onto the England bench this season, and scored seven tries for Saracens despite their salary cap crash. In the vanguard of a rich new crop of English back row forwards.

The try he carved out against Saracens showcased his ability as a support runner and distributor when his reverse pass put Danny Care in for one of the tries of the season. Big, powerful, deceptively fast No.8, with all the attributes to play at the highest level. Over to you, Eddie.

Came back from the World Cup with a bang after being on the Springbok bench, and spearheaded Northampton’s blistering start to the season with his lethal combination of pace and opportunism. More influential this season than his Bok rival, Faf de Klerk.

An English fly-half who is both a creator and a finisher. Keeps defences guessing because he has the speed, footwork and self-belief to exploit any gaps himself, but also has the passing and kicking skills to set others free. Big bonus of almost flawless goal-kicking.

It is hard to fathom how Australia did not make more of Morahan’s brilliant counter-attacking gifts – but Bristol are making up for it. A spectacular runner with the flair to make tries as well as score them, he notched 18 clean breaks and seven tries in this Premiership campaign.

An elegant, ghosting centre with the full range of play-making attributes to choose from. James has made the most of the front-foot ball delivered by a rejuvenated Sale pack this season by unlocking the tightest defences. Nudges ahead of Quins master-blaster Paul Lasike.

The swashbuckling, hard-running former All Black is the ideal foil for James. Fekitoa gets up such a head-of-steam that he is like a runaway train – and, when he is eventually derailed after smashing through multiple barriers, Wasps profit from the mayhem.

The 19-year-old Welsh wing was the sensation of the season after lighting up Kingsholm with a series of spectacular tries. His searing pace was the hallmark of many of his 12 touchdowns, seven of them in the Premiership, and his Wales debut cannot be far away.

The Chiefs have developed a new attacking dimension following the Scotland full-back and captain’s arrival in Devon. Hogg has also been revitalised, and the quality of his tactical kicking and match-turning running lines have helped the club to the top of the table.