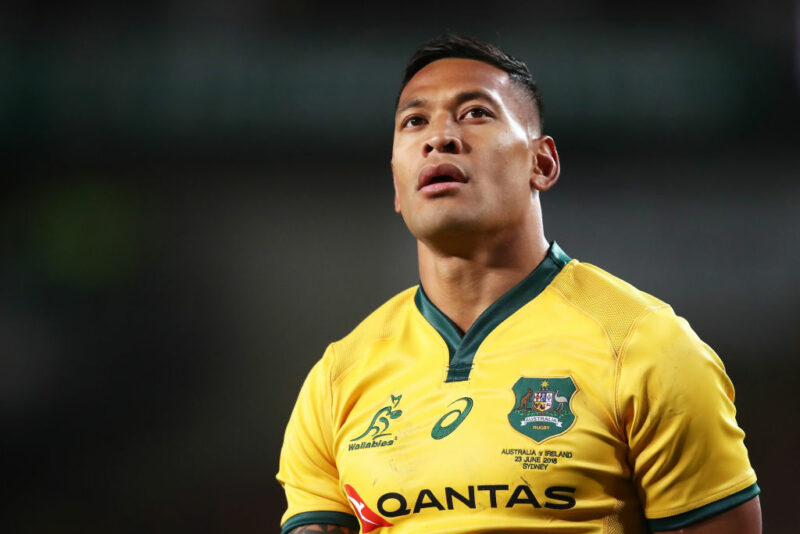 The future of Israel Folau as a Wallabies international appears bleak after a code of conduct panel found him guilty of a ‘high level’ contract breach.

A three-person independent panel has yet to decide on the sanction which should be imposed on Folau, Rugby Australia has threatened to terminate the $4m (£2.15m) contract they hold with the 30-year-old.

The deep water Folau finds himself in comes as a result of a controversial Instagram post in which he proclaims ‘hell awaits’ those who are ‘drunks, homosexuals, adulterers, liars, fornicators, thieves, athiests, idolators’.

Rugby Australia has been clear with its public condemnation of Folau’s act, and is privately downright furious that he has aired discriminatory views for a second time.

A problem the governing body now faces is whether to sack an athlete based on their fundamental religious views.

Only last week in the days preceding Folau’s hearing did one of his Wallabies teammates, prop Taniela Tupou, speak out against Rugby Australia’s actions and in defence of his faith.

The next steps taken by Rugby Australia chief executive Raelene Castle now run the risk of alienating Polynesian players who hold faith as a core value in their lives, while also wanting to maintain rugby’s open-to-all ethos.

Speaking last month, Castle outlined how Folau had been urged to not repeat his religious views on social media prior to signing a lucrative new deal in February.

“It was made clear to Israel in writing and verbally when I met with him last year that any social media posts or commentary that in any way were disrespectful to people because of their sexuality would result in disciplinary action,” Castle said. “Despite this Israel has chosen to ignore this warning.”

In a trying 18 months for Australian rugby, Castle and RA have had to give a vote of confidence to head coach Michael Cheika following a meagre run of four victories in 13 Test matches.

And they must now head towards a World Cup with the future of the 73-cap star full-back a flashpoint for potential mutiny.