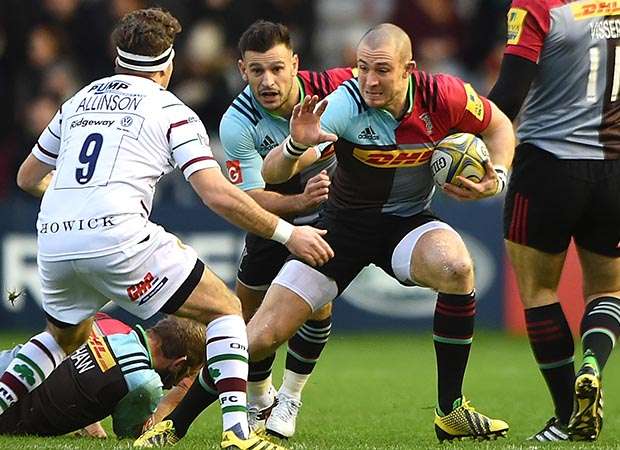 Harlequins face the prospect of losing star full-back Mike Brown in the summer.
And Brown’s fellow England international, scrum-half Danny Care, is also said to be considering his options.
Exeter Chiefs are looking for a big name full-back to move to Sandy Park in the close season and are reported to have had talks with Brown.
The 31-year-old No.15 is understood to have a clause in his Harlequins deal which allows him to talk to rival Premiership clubs and a leading agent has told The Rugby Paper that Exeter are not alone in their interest.
It is believed Brown has also spoken to Leicester Tigers about moving to Welford Road next season, with table-topping Wasps a third club to show interest in his services.
An agent said: “Mike is not particularly happy that Harlequins have not pushed on over the last few years.
“Since winning the Premiership title in 2012, the club have been treading water somewhat and despite a couple of big name signings in James Horwill and Jamie Roberts, they are still losing ground on the top teams. ­
“Mike is a winner and wants to win some more top honours at club level.”
Brown is fiercely competitive, but equally loyal and if director of rugby John Kingston can show the club has an upward trajectory, Brown could well stay at the Twickenham Stoop.
Quins’ dramatic late victory at Gloucester yesterday showed the team is not short on fighting spirit and thrust them back into a good position to qualify for next season’s Champions Cup.
Much will depend on how they finish the campaign and whether they can be viable title contenders next season.
Leeds-born Care, right, who turned 30 last month, is believed to be courting interest from champions Saracens and could be tempted by the lure of linking with his England half-back partner Owen Farrell.
However Richard Wigglesworth has extended his deal with the champions for another year, having declined offers of moving to France.
Veteran Neil de Kock, 38, is still at the club having extended for another year, along with former England U20s No.9 Ben Spencer.
Both have a year to run on their deals but it is understood Saracens are looking to lure a top class scrum-half who will stay for the long-term.
Sale are believed to be interested in Spencer’s services, with veterans Peter Stringer and Mike Phillips nearing the end of their careers.
MATTHEW EMERY – Additional reporting by Neil Fissler