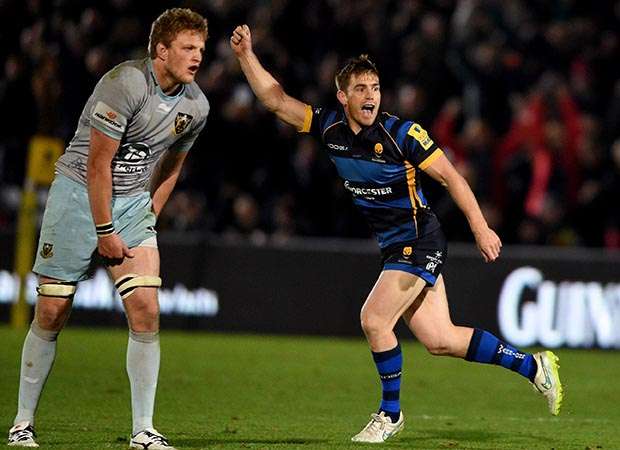 Drop goals feature heavily on the showreel of rugby’s greatest moments: Joel Stransky and Jonny Wilkinson won World Cups with them and Rugby Paper columnist Jeremy Guscott sealed a series win for the Lions with the cheekiest of efforts in 1997.
Yet drop-goals are fast becoming as redundant as the dive pass and sub-six foot centres, a relic of a bygone age when fly-halves – and No.8s for that matter, if you bring Zinzan Brooke into the equation – prided themselves on the art. You are just as likely to see a game that lasts for 80 minutes as you are a drop-goal, at club or international level.
For the first time in the history of the World Cup the number of drops scored fell into single figures at England 2015, while there was just one in the 15 matches of this year’s Six Nations campaign. The Premiership had just four successfully struck, from a miserly 24 attempts, over the entirety of the 132-game regular season. To put it into context, London Irish once got four in a match.
Since hitting a peak of 73 in the 2001/02 season, the drop-goal trend has consistently been downward give or take one or two anomalies.
Andy Goode, right, the Premiership’s joint-recorder drop-goal with 38, admits to being “gobsmacked” that Elliot Daly, Tom Heathcote, Danny Cipriani and Freddie Burns were the only drop-goal scorers with one apiece last season.
“If you look at the new breed of 10s in the Premiership now, they have all got this attacking mind-set. Looking at the likes of George Ford, Cipriani, Burns and Nick Evans, their first thought if they get a penalty advantage is probably to have a crack with a crossfield kick, a bomb on the posts or a little chip to score a try as opposed to go for a drop-goal,” Goode said.
“Gone are the days when the more traditional fly-halves loved a drop, players like myself, Alex King, Barry Everitt, Ludovic Mercier and Jonny. We were all 10s who ran a game and understood a game and had eyes on points all of the time. A lot of my thought process used to be that if I got a penalty I’d better go for a drop-goal because it gave me two shots to get three points rather than just relying on what might be a tough kick.
“It is probably unfashionable for a fly-half to go for a drop-goal now especially in open set plays. Nevertheless, I’m gobsmacked that there was only four kicked in the Premiership last season.”
Goode’s theory is backed up by current England star Daly, whose dropped-goal came in Wasps’ demolition of Bath last December. At the time he remarked, “one from one and never again”.
“I think teams are more focused on scoring tries, they see that as more important than three points, and then only use the drop-goal option if there is nothing else on, as an after-thought in a way,” Daly said. “There are a lot of 10s in Premiership who like to take the ball to the line and not sit in the pocket, which obviously gives you less time to line up a drop-goal, so that could be another factor.”
Drop-goals have been used to make powerful statements, none more so than Jannie de Beer’s nap-hand that brought Clive Woodward’s England to their knees at RWC 1999. 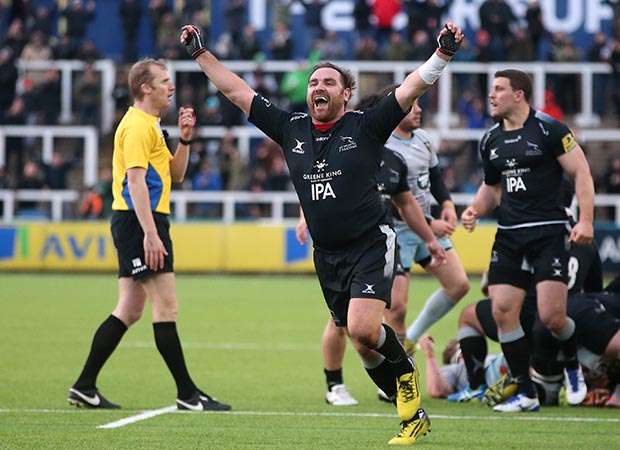 Goode, above, says that was the case in his final season with England, in 2009.  “We were playing at Old Trafford against Argentina and they had Juan Martin Hernandez at 10, who was the drop-goal king. Our game plan, under Brian Smith, was to send out a message to him that whatever he could do, so could we. I think I got one after about five minutes and then closed the half with another. It was probably the only time in my career I got two out of two.”
Current Premiership attack coach, Dave Walder (Newcastle) and Ali Hepher (Exeter) were also fine exponents of the art in their playing days, Walder is sixth in the all-time Premiership list, and says that drop-goal routines still form part of their respective clubs’ weekly preparations.
However, Hepher suggests that the risk-reward balance is not stacked heavily enough.
He said: “Attacks are better as a whole so therefore the chances of you scoring five points through a try or hanging onto the ball longer and putting pressure on the opposition to get a penalty are higher. Ultimately, the side that scores the most tries wins 75 per cent of matches.
“In our quarter-final against Wasps, we were within a yard from scoring a try and then we got turned over. A few people afterwards said we should have gone for a drop-goal but I disagreed, when you’re that close, you have to back yourself to score a try.
“At the right time and in the right scenario, a drop-goal can be useful. The only thing that worries me with drop-goals is charge downs. Sides are much, much better at putting you under pressure in that respect. Maybe that’s down to the improved fitness with players getting off the line quicker. In no time at all, you can go from one 22 to another if you get charged down.”
This comes from a man who credits a drop-goal for helping to save his Northampton career.
“The best one I ever hit was on my first team debut for Saints. With five minutes to go I hit a 45-yarder to tie the score and then with seven seconds left, I hit a penalty from the same distance to win it. That changed my whole career because I’d left the club at that point and was just invited back for one game.”
Without Gareth Steenson’s two drop-goals helping Exeter build on their slender three-point first leg lead over Bristol in the 2010 Championship final, the Chiefs’ destiny may have been different too.
Walder said: “In the past you’d be worried that the referee might call advantage over after two or three phases. So attempting a drop- goal was almost used as a free shot.
“Nowadays, refs play such a long advantage in the opposition 22, almost until a move breaks down, so teams continue playing for a try knowing the penalty kick’s there to fall back on.
“The drop-goal has fallen out of fashion. It is such a hard skill so it should be rewarded with three points but, at the same time, people want tries and to be entertained.”