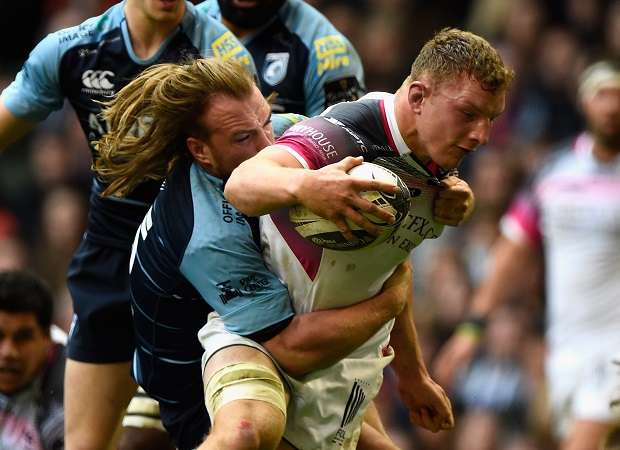 Sam Underhill must put aside his loyalty to the Ospreys and join a Premiership club if he is to fulfil his England ambitions, according to former England captain Martin Corry.
World Cup winner Corry, who captained England in 2006 and 2007, believes Underhill needs to prove himself against the nation’s other leading openside contenders, of whom he rates Harlequins’ Luke Wallace most highly of all.
Underhill’s allegiance lies with England, but he has stated his intention to see out a three-year contract in Wales which, under the RFU’s ‘exceptional circumstances’ rule, might preclude him from donning a Red Rose shirt.
Corry believes the 19-year-old must act, telling The Rugby Paper: “I’m a big believer that you need to be in the shop window and, from where the coaches are, he’s probably a bit too far out of sight playing his rugby in Wales.
“That’s not taking anything away from the Pro 12 but he needs to be playing against his direct competition. He wants to play for England… well, there are plenty of Premiership clubs who need quality sevens, so let’s get him back.
“You want to be comparing players and if Sam comes back pretty much every Premiership game will feature a big sevens match-up. He needs to be competing against Luke Wallace, Matt Kvesic, Will Fraser and Teimana Harrison.”
After years bemoaning the lack of genuine openside specialists, Corry sees the emergence of so many young candidates as a boon.
He believes England head coach Eddie Jones will soon have a decision to make, though, and sees 26-year-old Wallace as the leading prospect.
James Haskell fulfilled the role during the Six Nations, but Corry explained: “I don’t see Haskell as a seven. I think he has a role within the England squad, but it’s as a six competing with Chris Robshaw and the other wealth of blindsides.
“Harrison’s come from nowhere and must be considered, while Kvesic and Fraser are good. But Luke Wallace has just cleaned up the three player of the year awards at Harlequins and you have to take notice of people on the inside.
“I think he’s been outstanding and if you compare the sevens out there on this season alone, he’s marched ahead as an out-and-out seven. Wallace has the nod over Jack Clifford at his club, but the danger is he’ll get moved around.”
Whoever Jones picks, Corry believes stability will be key if England are to create a world-class back row to win the 2019 World Cup.
He added: “Loads of good sevens have landed on our plate and it’s now down to Eddie to say, ‘this is where we want to go’. But whoever he picks will need two years in the shirt to become a fully established England player.
“Four or five can be world-class but Eddie must say, ‘this is my No.7’ and stick with him. That’s the brutality of selection but to develop a successful side the most important thing is a stable team in which people can grow.”
NEALE HARVEY