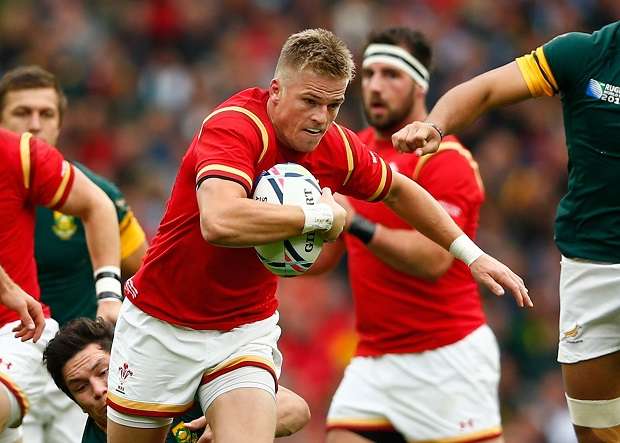 Gareth Anscombe is braced for a rocky return to New Zealand after turning his back on the All Blacks.
Anscombe is likely to get the nod from Warren Gatland for this summer’s tour and the chance to face his native New Zealand.
It would be the first time the 24-year-old has come up against the All Blacks since his controversial move to Wales in 2014. As a Junior World Cup winner and a Super Rugby champion, Anscombe appeared destined for international success.
But with Dan Carter, Aaron Cruden and others ahead in the pecking order, the fly-half opted to play for the land of his mother and swapped the Silver Fern for the Three Feathers.
Yet more telling could be a potential re-match with his former club Waikato Chiefs. Hamilton has proved a happy hunting ground for Anscombe. He made his Super Rugby debut there for Auckland Blues in 2012 and lifted the title with Chiefs at Waikato Stadium a year later. Not that he expects the red carpet treatment when Wales roll into town next month.
Anscombe told The Rugby Paper: “Hopefully I will make the plane for the tour and I’d love to play in that match. But it’s a hard one. If you play in the mid-week game against the Chiefs then it means you’re probably not playing in the big one, the Test match.
“But it will be good to just be back at the Chiefs and to catch up with a few of the boys. I’m sure I will be ‘in for it’ on the pitch if I play.
“I think the family will be wearing red. They’re excited and already trying to get tickets but my dad (Mark Anscombe) probably won’t be there as he’s now coaching Canada. I’ve got a few mates there as well and their loyalties will be pretty divided. I don’t think they know who to support!”
Wales have never beaten the All Blacks on home soil but Gatland takes Wales to the land of the world champions for a second time having recorded their ‘best’ result in 2010, a 29-10 defeat, in Hamilton.
Anscombe said: “A victory down there is well overdue for Wales but it’s a huge challenge.
“Losing legends of the game such as Dan Carter, Richie McCaw, Ma’a Nonu, who were all once-in-a-generation world-class players, is bound to hurt the All Blacks.
“But they’ve still got a lot of experience and they keep churning out good youngsters who are going well on the world stage.
“Wales have a hell of a battle on their hands but it’s a great opportunity to set yourself against the best.
“We’ve got to carry on from the Six Nations. We finished the tournament well so we have to play some rugby and throw the kitchen sink at them.”
Anscombe certainly cuts a far happier figure these days. Rather than the outsider struggling to get to grips with the Cardiff game under Mark Hammett and battling to win over the sceptics, he has settled in the capital and is enjoying his rugby under head coach Danny Wilson.
He said: “I’m certainly a lot happier than last season. We are now playing a brand of rugby that suits my style more and that I enjoy.
“It’s nice to get a run of games at 10. I’m more than happy to fill in at 15 but everyone knows where I see myself and the Wales selectors see my future there as well.
“But there’s tough competition all over the place with Dan Biggar, Rhys Priestland and a few others sniffing around, so I’ve got to play well and be consistent.
“Obviously life is a lot easier when you’re winning. You can see people with smiles on their faces in training at the Blues and a lot of credit for that has to go to the coaches.
“We’ve had a good run recently and people can see we are improving. If we build on that we could be contenders next season.”
MATT LLOYD