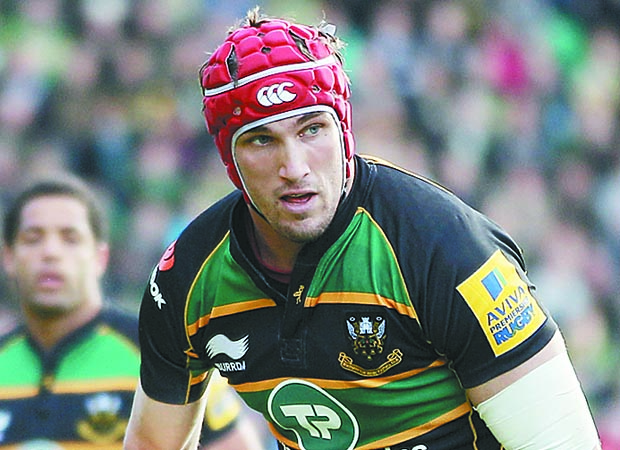 Players’ union boss Christian Day has warned industrial action is possible if concerns over player welfare are not adequately addressed.
Saints second-row Day, newly appointed chairman of the Rugby Players’ Association (RPA), applauds the new protocols over concussion, but believes much work remains to be done on issues such as insurance, rest periods and game limits.
Day wants mandatory summer rest periods introduced, adding: “That’s at the forefront of most players’ minds and, ultimately, there’s a huge onus on Premiership Rugby (PRL) and the Rugby Football Union (RFU) to ensure player welfare because we’re the ones earning their money.”
He admits being reluctant to go down the American route where player power means top sportsmen regularly go on strike, but says it is incumbent upon rugby’s authorities to ensure its most valuable assets, the players, are properly looked after.
He said: “We’ve looked at American sport where player power is huge and we’re not looking to get to that level. That said, if it reaches a point where it feels like rugby players are not being looked after, we may rise up and you could lose your major asset.”
Outlining his manifesto, Day told The Rugby Paper: “The RPA’s probably at its strongest now in  terms  of influence so we’re pleased to see PRL and the RFU taking concussion seriously by setting up concussion education for players and coaches.
“We’re moving in the right direction and whereas ten years ago the tough guys were the ones who got knocked out and carried on playing, players now know that’s the stupid guy and the tough ones are those who put faith in their medical staff.
“Ultimately, though, the focus of the RPA is to make the game as safe as possible. We’re playing a brutal sport that has seen more enforced retirements over the last four years than it has ever seen before, so our priority has to be player welfare.
“Players are worried about too many games. Last season at Northampton, an incredibly successful one, we played every single weekend and I topped out at 32 games which is the mandated maximum, so that’s a big concern for me.
“We’d prefer bigger rest periods and a guaranteed mid-season break, although we realise the latter is unlikely when you’ve got autumn Tests, the Six Nations, LV= Cup and all the European games on top of a fiercely competitive Premiership.
“But the worry is for players at the most successful clubs who then play internationals during the summer. That becomes a hugely drawn out season and we’ve seen that in the number of Lions who have been injured since 2013.”
NEALE HARVEY