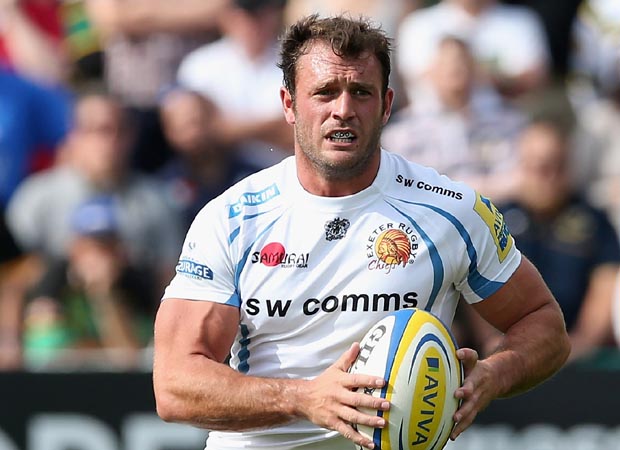 Luke Arscott’s England dreams may always remain unfulfilled but Bath’s new signing believes he can replace those ambitions by bringing glory to The Rec.
He is the man charged with filling the shoes of Clermont-bound Nick Abendanon but, much like his predecessor, Stuart Lancaster has turned a blind eye to his services.
Abendanon’s England career flickered briefly with two caps in 2007, despite a career spanning nine years and in excess of 200 appearances at The Rec.
The window of opportunity in a Red Rose shirt also appears to have come and gone for Arscott after four years in the international wilderness at Exeter Chiefs.
Rob Baxter banged the drum for his full-back’s England recognition while as late as last year, Will Greenwood suggested a Lions call-up.
But Arscott, 30 next month, is ready to put those thoughts behind him by helping to replenish Bath’s trophy cabinet after a season in which the Rec outfit came so close before fading late on.
“I’m still an ambitious player and I’d like to win trophies and medals, but I’m not massively driven by England and international recognition anymore,” said Arscott.
“I feel the way Stuart has gone he is looking at the new crop and with the way he’s gone about it, everything’s gone very well for England.
“That shop is shut but I’m still as hungry as anybody to win as much as I can – hopefully I can do that with Bath.
“Nick’s been a Bath stalwart and almost a legend of the club for nearly ten years now, and if I have anywhere near the same impact as him I’d have done well.
“I think I’ve played my best rugby over the last few years and I don’t think age plays a huge part at the moment – I’m probably in the best shape I have been in my career.
“I’m only in my 20s for the next couple of weeks but it will be nice to get going and prove that I’m at my best.
“They’ve got some good young players so it’s going to be a different challenge. I was obviously at Exeter for four years and I’m just looking forward to getting started.”
Arscott left Exeter in May for ‘personal reasons’ and admits the idea of moving on had been a tempting one for some time.
He will not be guaranteed the No.15 shirt at Bath however, with Anthony Watson – who is most definitely in Lancaster’s plans after earning his first England start against the Crusaders – jostling for a back three place.
And though Watson is nine years his junior, Arscott does not intend to be a short-term solution when he reports for pre-season training for the first time next week.
“I’d been toying with the idea of leaving (Exeter) for a while and it was maybe earlier than I’d been expecting, but if an opportunity opened I wanted to take it,” he added.
“It helps that it was Bath who came in for me when they did and it was a great opportunity for me, they’ve an exciting bunch of players coming through.
“I’m just looking to get into training and really getting stuck in to compete with players like Anthony.
“We had a fantastic squad at Exeter and all the young boys coming through have done fantastically well to win the LV= Cup and my aim is to go even further.
“There’ll probably be a bit of needle when I go back to Sandy Park because of the rivalry but I think that’d be the case for any club.”
CHRIS BAILEY