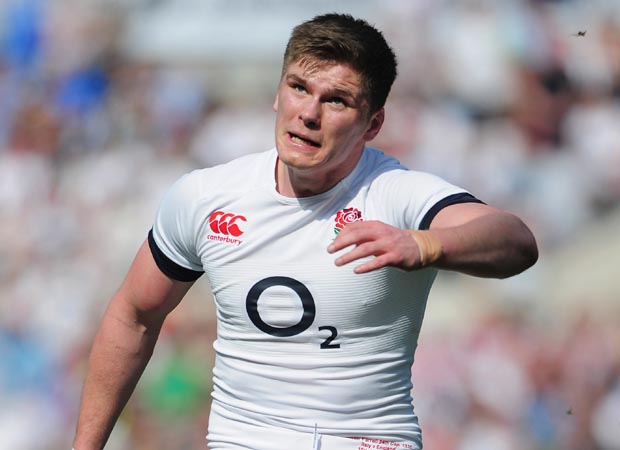 Owen Farrell can be bracketed among the world’s top three fly-halves alongside Dan Carter and Jonny Sexton, according to Wasps and former England star Andy Goode.
Goode hailed Farrell’s performances during the Six Nations as “exceptional” and reckons he has developed massively since his Test debut in February 2012.
England’s playmaker-in-chief achieved an 82.8 per cent success rate with the boot, compared to Sexton’s 75 per cent, but, more importantly, he played a leading role in his side gaining more metres and beating more defenders than any other team.
Farrell’s growing maturity has impressed Goode, who told The Rugby Paper: “People were jumping on Owen’s back a bit before the Six Nations, saying he couldn’t do this or that, but over five Six Nations games he was outstanding in every one.
“He’s always been a world-class kicker but if you go back to the Wales game and the control he showed that day, you can see how he’s developed his all-round game in terms of game-management and how aggressive he can be in the tackle.
“His decision-making was exceptional that day and he completely bossed the game.
“He’s only 22, but of his generation he’s one of the world’s best. You can’t compare his record with Dan Carter yet and Jonny Sexton was No.1 for the Lions last year, but in terms of the all-round package Owen brings, he’s up there alongside them.
“Quade Cooper is an outstanding talent but has flaws defensively, while Pat Lambie and Morne Steyn are playing No.10 for South Africa. But Owen’s on an upward curve in terms of international rugby right now and I’d have him in my top three.”
England’s fly-half options are increasing and Goode was equally encouraged by George Ford’s cameo against Italy last week, which the 21-year-old capped with a neat break and intelligent pass for skipper Chris Robshaw to notch his side’s seventh try.
Goode said: “George Ford has been fantastic all year for Bath and deserves his spot on the bench. He did really well last weekend, with a nice dummy and break and an unselfish pass as well.
“I’ve played with loads of guys who will make a break and then try and finish it themselves to look good in front of the crowd. But what impressed me about George was how he made a tough pass to make sure someone else got in for the score.
“The class of George to make that break and deliver a killer pass was brilliant and we’ve got two young fly-halves now who’ll be there for ten years. With Freddie Burns in the mix as well, they’re three very different players, and there are others.
“Henry Slade at Exeter looks a real talent. He’s got lots of time on the ball, good skills, good passing and spatial awareness. We’re really well stocked at the moment.”
Burns, 23, has dropped down England’s fly-half pecking order on the back of a season badly disrupted by poor form and the saga of his protracted move to Leicester. But Goode is backing him to bounce back amid harsher new surroundings.
“The Leicester environment will be good for him,” Goode said. “It’s a hard-nosed environment and Freddie needs a bit of that. He’s got the X-factor game but he’s been criticised for his nuts and bolts and that’s what Leicester will drive into him.
“Leicester don’t want the flashy stuff unless you’ve got the basics, so he’ll knuckle down and I think he’ll be a big success at Welford Road. He’ll be playing behind a pack that is going forward every week and they’ll set a framework for him.
“You earn respect at Leicester through pre-season and I’ve told him it’s a great opportunity. George Ford is ahead of him now – a fair bit, actually – but if Freddie comes out playing exceptionally well, he’ll soon push back into the England set-up.”
England’s attacking game progressed significantly during this year’s Six Nations, with a try-tally of 14 being their best since scoring 16 in 2009.
Goode credits attack coach Mike Catt for that, adding: “England took stick in November but they’ve come through this Six Nations well, and the way they took Wales apart at Twickenham you could see the ball-handling coming through.
“I know Catty well and his relationship with the players, along with the other coaches, is brilliant. They’re trying to up-skill a lot of players and you can see snippets, where they’re running from deep and off-loading, of how their attack is evolving.
“When Stuart Lancaster set out two years ago, his goal was to get as many young guys embedded into the team ahead of the 2015 World Cup. Not one player had a bad Six Nations and I think we’re in a great place now.”
NEALE HARVEY