Posted on 18th November 2020 by admin in Columnists, Features, Peter Jackson with 0 Comments 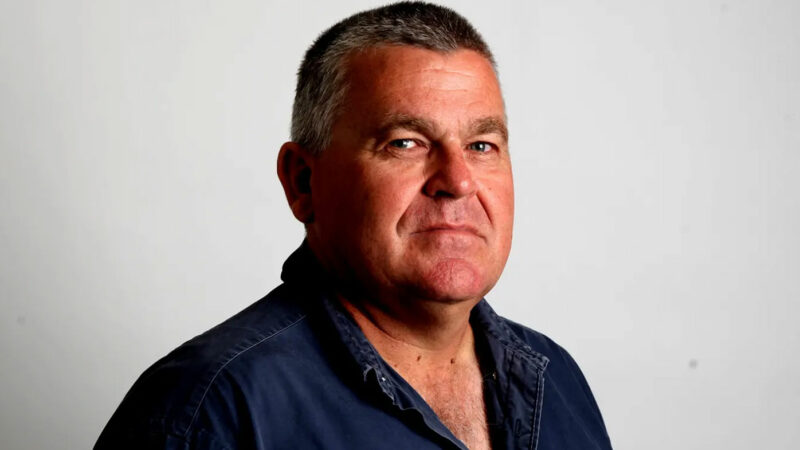 PETER JACKSON, president of the Rugby Union Writers’ Club, on the life and uproarious times of a fearless journalist who dared to ask the most famous question in World Cup history.

Once England had finished making mighty hard work of beating the deficient Springboks at the 2003 Rugby World Cup, The Sydney Morning Herald responded in the finest tradition of Anglo-Australian sport.

Their mocking portrayal the next morning of the favourites’ miserable failure to score more than a solitary try at the Subiaco Oval the previous evening zoomed in on Jonny Wilkinson lining up one of his seven shots at goal. It appeared beneath a wounding headline:

IS THAT ALL YOU’VE GOT?

The rhetorical question, as posed by the perceptive Greg Growden in his match report, achieved rather more than merely playing to the gallery by pricking the inflated Pommie balloon.

Publicly, Martin Johnson’s team for all seasons laughed it off. Privately, it touched a nerve, preying on their apprehension at shouldering an unusually heavy burden of expectation, gnawing at the suspicion that they were ever so slightly beyond the zenith reached in Melbourne some six months earlier with the near-perfection of their win over Eddie Jones’ Wallabies.

Just as no newspaper in Australia carried as much clout in rugby circles as The Herald, so no journalist across that vast country carried more than Growden, a heavyweight in every sense.

The immensity of his stature could be gauged by the tributes flowing from the great and the good in Australia and the wider rugby world not least in Britain and Ireland following his death last weekend at the age of 60.

Growden’s journey was like no other, from a rice farm at Coleambally on the fertile floodplain of the Riverina in southern New South Wales where he grew up, eager to maintain the family’s Aussie Rules tradition set by his father Kevin at Port Adelaide.

Growden was old-school and proud of it, ever ready to defend the demanding standards of Australian sport and woe betide those adjudged to have fallen short. Whenever he found the Wallabies guilty of doing so, Greg let them know in language which left no room for ambiguity.

He was utterly fearless. His words would hit their targets like grappling irons and when some of the mucky stuff came boomeranging back, Growden fought his corner. Miraculously, no amount of collateral damage ever seemed to affect his formidable network of contacts, ‘snouts’ as he would jokingly call them.

Jones, one of many coaches held to account by the man from The Herald, never underestimated the breadth of Growden’s knowledge. “We had constant running battles, all professional,” Jones said. “He had the most incredible network of sources. He was very well connected.

“All you can do in this world is make your mark. And Greg made his mark. He was a good man.”

Rarely can the Growden Growl have been delivered in more devastating fashion than in a column provoked by the Wallabies shipping 78 points in back-to-back blitzes by the All Blacks two years ago. As Australian rugby editor of the US-based global cable tv network ESPN, Growden fired this broadside at Wallaby coach Michael Cheika:

“What is so bleedingly obvious from those defending Cheika is that mediocrity is now accepted in the Rugby Australia ranks. Being second best is okay. Putting up a bit of an effort is apparently good enough.

“Getting away with wheeling out feeble excuses is now accepted. Sorry, that is not the real world. Australian sport has thrived on playing above its weight. Why sport is so crucial to our national culture is that this country has so often defied the odds.

“Our sports people inspire and revive our nation. It is expected, no demanded, that Australia are winners. Anyone who thinks otherwise should not be allowed anywhere near an Australian sporting team. So maybe some at Rugby Australia should start thinking of other options.”

“Fort Fumble”, he said in one particularly memorable rant. “Has turned making senseless appointments into an art form, including those who have sat behind desks, represented them on boards or have been allowed to wear a ‘Tahs tracksuit.

“Really, can anyone explain what the Waratahs are trying to do? And what exactly is the coach attempting to get them to do? What is their attacking strategy? Have they actually got a strategy? Is there a plan? Beats me.”

“One day Greg, we used to tell him, you’ll get round to saying what you really mean.” Fort Fumble responded to his passing by lowering their flags to half-mast and thanking Growden via chief executive Rob Clarke for ‘keeping numerous coaches and administrators to account for his 40 years in the game.’

John O’Neill, chief executive during the golden days of the Wallabies, said: “I first met Greg in late ’95 and quickly realised he was a force to be reckoned with. He didn’t suffer fools, detested dishonesty and was unambiguously courageous. He didn’t see his job to be popular but on tour he could be the life and soul of the party.”

Growden never lost the ability to laugh at himself but that fearlessness stemmed from his early days as a cub reporter at the Sydney Cricket Ground. There he had the good fortune to strike up a friendship with one of Australia’s most revered cricketers, Bill O’Reilly.

“Greg always regarded O’Reilly as a second father, his mentor for the journalistic journey ahead,” says Jim Tucker, recently retired from the Courier & Mail in Brisbane. “O’Reilly became an important compass for his standards. He’d tell Greg: ‘Be your own man. Stand up for what you believe in. Don’t be conned by PR spin. Value honesty as highly as anything in your life.’

“Growdy never forgot that. In becoming a giant of sportswriting, he chronicled golden eras of Australian rugby but was always fearless in calling out poor performances, slipshod administration and any lack of honesty.”

His generosity knew no bounds, not least in helping others. It was Growden who launched Peter FitzSimons’ career as one of Australia’s greatest authors by insisting that The Herald publish the first piece written by the former Wallaby prop.

As for that famous line, Is that all you’ve got, Growden was smart enough to know that the taunt was always liable to come back and bite him. When it did, in the final seconds of extra-time during the greatest of all World Cup finals played 17 years ago this coming Sunday, his newspaper saluted the English triumph in most un-Australian-like fashion.

The Sydney Morning Herald turned its whole front page into a ‘Public Notice to England and its sports fans’. Growden’s fingerprints were all over the most telling paragraph:

“WE OFFICIALLY REMOVE THE 215-YEAR-OLD CHIPS FROM OUR WEARY SHOULDERS AND ENCOURAGE ALL AUSTRALIANS TO BE NICE TO ANY PERSON OF ENGLISH PERSUASION THEY COME INTO CONTACT WITH FOR THE REST OF THE WEEK….well at least until the close of business today.”

Greg Growden’s death from cancer long before his time is a tragedy for his family, for his wife Elizabeth, daughter Anna and son Angus. He will be mourned by more friends around the world than he can ever have imagined. For those of us on this side of the Equator, Wallaby tours will never be quite the same.