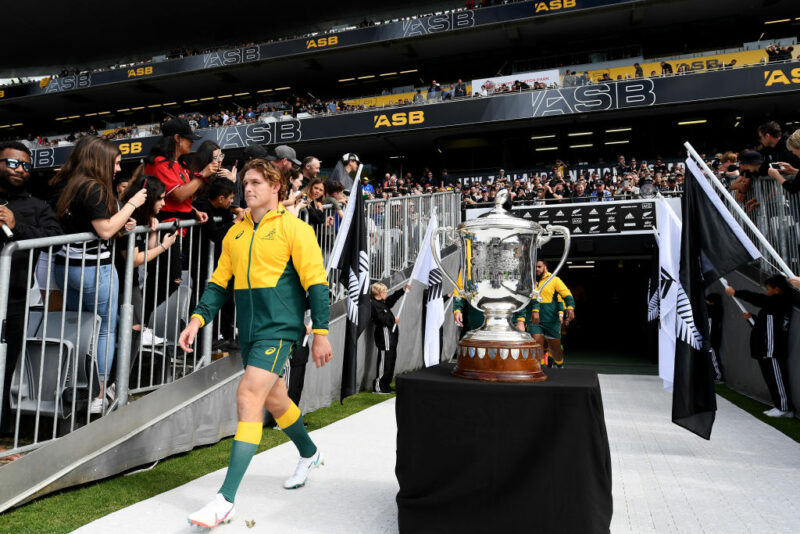 Sir Gareth Edwards never missed a match for Wales and it still took him eight years to get as far as 50 caps, a test of unparalled endurance at the time.

At The Cake Tin in Wellington, Michael Hooper took the penny and the bun on the occasion of his 100th Test for Australia. That he did it in a time only marginally longer than Edwards needed to play half as many makes the feat all the more phenomenal.

Given the relentlessly confrontational nature of his specialist position, the Wallaby captain’s capacity for absorbing physical punishment and coming back for more would appear to know no bounds. Keeping body and soul intact is one thing, staying lucky a very different matter.

Sam Warburton’s ran out to the point where he risked permanent disability, the terrifying price for the dangers inherent in being supreme at the breakdown. The Welshman, his place in the Pantheon assured as captain of two unbeaten Lions’ series, played his last game at 28 and retired at 29.

Hooper will be 29 next week. As of last night only one thing had stopped him in his tracks, long enough to prevent his 100th Test falling on the same weekend in early June as his first, against Scotland in 2012.

The knock-on effect of the global wreckage wrought by Covid-19 delayed Hooper’s landmark until last weekend, a trivial matter set against the loss of more than a million lives but one not without historic dimension.

The four-and-a-half month gap between his 99th and 100th Tests prevented the son of an English immigrant from getting there in the fastest time of all. Instead he comes in third behind the All Blacks Sam Whitelock and Kieran Read in a top-ten chart monopolised by players from south of the Equator.

Only two of Europe’s most resilient made their centuries inside ten years – England scrum-half Ben Youngs and former Ireland tighthead John Hayes. George North will join them provided he negotiates his two remaining Tests for Wales before November 13, the tenth anniversary of his arrival against the Springboks.

Alun Wyn Jones got there in ten years exactly, 48 hours ahead of ‘The Beast’, Springbok prop Tendai Mtawarira. Ronan O’Gara is one month further back, just ahead of George Gregan, Gethin Jenkins, Dan Carter and Hooper’s predecessor as Wallaby captain, Stephen Moore.

The figures also tell another story, that of the exponential growth in Test matches. Back in Edwards’ pomp, the Home Unions moved to the beat of a very different drum, restricting their season, more often than not, to the Five Nations and nothing else.

At most they would extend their annual schedule to cater for the once-in-a-blue-moon visits by New Zealand, South Africa and Australia. Throughout the Fifties, the All Blacks existed on a starvation diet of Test matches, averaging three a year throughout a decade which started and finished with visits from the Lions.

Hooper has already played 24 times against New Zealand, a number likely to rise sharply considering that the pandemic has wiped just about everyone else out of the game in their neck of the woods except for their neighbours across the Tasman.

The Unions’ fox-trotting to their own tune ended with Rupert Murdoch’s £335m ten-year grab of what became The Rugby Championship. In the 25 years since, television has whirled the game around as if cranking up a battered old pin-ball machine.

The dance of the demented is a consequence of the game selling its soul on the flawed basis of the more matches they played, the more money they made, a philosophy which suited the RFU and other Unions as a lucrative antidote to keeping those uppity clubs in their place.

Those perceptive enough to see that less is more, not least in protecting the Test arena from its own obesity, deserved to be heard. Instead World Rugby reduced their plea to a cry in the wilderness by persistently refusing to curb the proliferation of Test matches.

A reduction to ten in non-World Cup years would have shown they  intended to take player-welfare seriously. Doing nothing has merely ensured that the players keep treading the same demanding treadmill, year in, year out.

Michael Hooper has averaged twelve and a half Tests a year for the last eight years. In the course of goose-stepping his way across the global stage en route to becoming Australia’s first centurion, David Campese rarely missed an international but only averaged seven a year because that’s all there were.

The feast has become a famine, most devastatingly for the Springboks, last seen outwitting England in the World Cup final a year ago and still with no idea when they will be able to play again.

Satellite television rarely fails to create the impression that what you are about to see will be the greatest match of all time but only until the next one which will, of course, be greater still. In their relentless pursuit of putting bums on sofas, history is the major casualty as shown in the gushing prelude to the Bledisloe Cup draw in Wellington.

“The All Blacks and Wallabies have history which stretches back 117 years,’’ says the commentator before proceeding to dismiss that very history in the next breathless sentence. “But in that time has there been a game which has created so much anticipation and excitement as this?”

There certainly has. The 1991 World Cup quarter-final in Dublin springs to mind, a momentous occasion when the All Blacks surrendered the pot of gold with the God-fearing Michael (Never-on-Sunday) Jones watching from the stand rather than putting the fear of God into Bob Dwyer’s fearless Wallabies.

If that’s too long gone for some, then there is a more recent example – the 2015 final at Twickenham when the rugby world stopped to watch an enthralling contest.