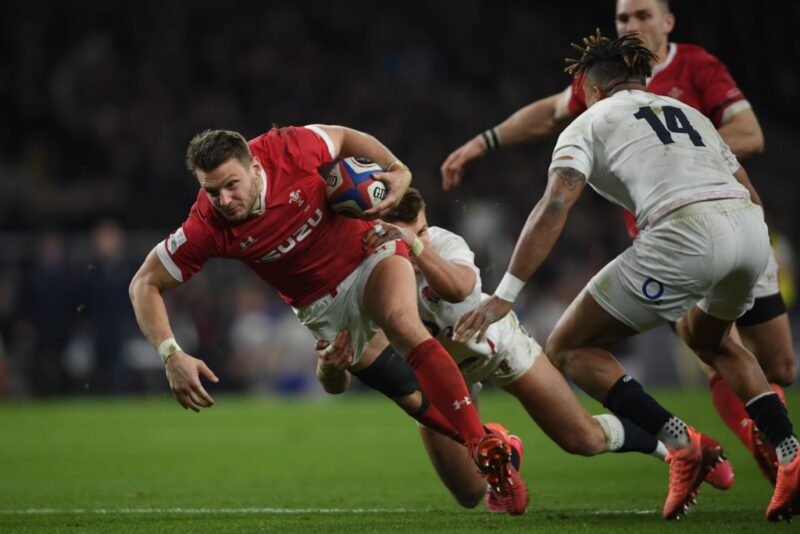 DAN Biggar says he may not be Beauden Barrett when it comes to natural talent, but the Northampton and Wales fly-half has something else that is priceless. Heart, or as they say in Wales, calon.

Biggar is infused with an inspirational never-save-die spirit, and his gritty example has been a hallmark of his 83 Test appearances for Wales – and especially those against England.

It was evident most recently in the 33-30 Red Rose escape at Twickenham in March after Biggar sparked a last-ditch Welsh revival by slicing through for a try which he converted from the touchline – but that is just the start of a trail of gunpowder that stretches back a long way.

Biggar scuppering England is a recurrent theme. He was wearing the Welsh 10 shirt in the 30-3 rout of Stuart Lancaster’s Grand Slam-chasing England side in Cardiff in 2013.

He was at it again with a man-of-the-match performance in the 2015 World Cup pool win at Twickenham which ushered Lancaster’s crew out of the tournament. Biggar’s big match temperament was writ large as he kicked 23 of the points for Wales in their 28-25 victory.

Last year Biggar made the difference again, as he came off the bench for Gareth Anscombe on the hour in Cardiff to produce an inspired final quarter display which saw Wales turn a 10-9 deficit into a 21-13 victory – before going on to secure the third Grand Slam of Warren Gatland’s tenure as coach.

It came courtesy of a Biggar pass which sent Cory Hill stampeding over, and then a precision cross-kick which saw Josh Adams soar highest before scoring the second try.

While Biggar may not be blessed with Barrett’s blistering pace or footwork, those who are beguiled into thinking that there is no threat in his wiry 6ft 1ins frame are usually left counting the cost, because his distribution skills are exceptional, and his will to win unsinkable.

Biggar, 30, has had his share of brickbats because he is not out of the classic Welsh fly-half catalogue, alongside twinkle-toes like Barry John and Phil Bennett, but he is his own man and has not let it faze him.

“I just fitted in at 10. I’ve always been quite confident when it comes to speaking, and in my own ability – so I slotted in there.

“What I didn’t want to be, is what I’m not. I knew I wouldn’t be as X-Factor as Beauden Barrett, but I wanted to be able to run a game, and be competitive, consistent, and never-say-die.

“I feel as if I play to my strengths and anything else is a bonus. I wanted to mould myself into what I do well – and if you play 10, you have to enjoy the extra responsibility and pressure. The thing not to do is bow to the expectations of other people, or the media.”

Biggar adds: “When it comes to handling pressure at fly-half you hear people saying that they are completely in the zone. But I don’t quite buy that. Everyone feels pressure, but if you trust your own skill set, and try not to do something special, or force it, but actually make sure you execute what you are good at, you can handle it.”

In the return summer warm-up game against England before the 2019 World Cup, Biggar showed just how well he handles it, giving another star turn display by setting up George North for the only try of the match in a 13-6 win.

However, it is not just England who have paid the price for underestimating Biggar. With Anscombe ruled out of the World Cup by a knee injury, the Swansea-born play-maker was back in the driving seat in Japan, and helped to steer Wales through to the semi-finals.

Wales not only finished unbeaten at the top of a difficult pool including Australia and Fiji, they rallied despite a dip in form against France in the quarter-finals, keeping their nerve to squeeze through against a side handicapped by Sebastien Vahaamahina’s sending-off.

Biggar did not take much comfort from an attritional semi-final ending in a 19-16 loss to eventual world champions South Africa, but it speaks volumes for the defensive steel of Biggar and his team-mates that they ran the Springboks much closer than England did in the final.

Given an international track-record of Biggar’s calibre it’s little wonder that Northampton made a move for him, and since he went to the East Midlands two seasons ago from the Ospreys he has played a key role in the club’s rejuvenation.

Ask Biggar if he felt apprehension about his international future playing outside Wales, and leaving the Ospreys after being there man and boy, and he says joining Saints was the right call at the right time.

“There was naturally a thought about what would happen internationally, but there were also rumours of the 60-cap rule creeping in, and at that stage I was in the 50s, so I was not overly concerned.

“When I signed with Northampton initially it was with Jim Mallinder in charge, but the club was brilliant at keeping me in the loop over that period, and the move has benefited me hugely as a rugby player.”

He adds: “For Wales, I’ve missed one game a year – in the autumn – and Northampton have been brilliant.”

Biggar believes that Kiwi director of rugby Chris Boyd and attack coach Sam Vesty have played a key role in picking the club up, and taking him and the rest of the squad with them – to the extent that Saints went into the lockdown period in a Premiership play-off place (fourth), and with an away European Cup quarter-final at Exeter.

“I’ve said how impressive Chris is as an individual, and as a coach. When you know the game like he does, and have worked with the quality of players he has at the Hurricanes, and as a New Zealand age grade coach, he has all the credentials.

“It’s the unstructured element of playing what you see that he encourages, and that has benefited me. Chris finds the balance between being a hard task master, but always being a good boss. That’s because he ‘gets’ people, and understands that as individuals they need different things.

“A big part of it is having good man management skills, and surrounding yourself with good people, and he does both. He works us incredibly hard, but if you put the work in, you get plenty back from him. He always says that anyone can go and see him if they want to discuss anything, and he will always help if it is a welfare issue – but it has to add up, because he is no pushover.

“As a man, and as a coach who is taking the players along with the style he’s bought in, he’s right up there. My relationship with him has been superb – there are not enough good words to describe it.”

He gives Vesty a similarly glowing report. “Sam is so energetic, and I feel I’m learning every week, every training session. It’s about getting better, and that’s what he concentrates on – helping each player to improve.

“Being at Northampton with Sam and this young backline takes me back to when I first started at the Ospreys as a youngster with all that enthusiasm. We have this banter, because at every meeting Sam tries to be cool and calm – and at that stage he is. But, as soon as the ball goes down, whether it’s in training, or during a match, he is shouting and swearing immediately. It’s great.

“It’s refreshed me, and made me feel younger, because, although there is a spine of experience, the squad is full of young, energetic, hungry players who want to get better as players and people. This team has an appetite for success and excitement, and you only have to look at young backs like Rory Hutchinson, George Furbank and James Grayson to see it. I still feel like I want that too – it rubs off on me.

“Together Chris and Sam have been nothing short of exceptional, and I hope there are good things to come.”

Biggar says Saints are within reach of a breakthrough, but recognises that nothing will come easily. “Winning a Premiership title is very hard, because you are challenged at every turn. It is no coincidence that Leinster come good in Europe every May, because you only have to look to see how well rested they are after the Pro14.

“In the Premiership you have to back it up week in, week out – and that’s what I enjoy most about it. This 10, 11 weeks has allowed us to get the guys back to fitness. It’s a slog of a league, but brilliant to play in. We’ve got the ability to do it, no doubt, but you need a bit of luck too.”

Biggar is also looking forward to competing for a place on his second Lions tour next season, with South Africa in his sights having been part of the 2017 squad in New Zealand.

His assessment of the Springboks is respectful, but there is no disguising his enthusiasm for the array of talent the Lions can call on.

“South Africa are an extremely strong side, and they have that ability to just keep rolling people off the bench, with big men replacing big men, and quality replacing quality. It’s about whether you can muscle-up because the Springboks have a big pack, and a superb 9 and 10 in Faf de Klerk and Handre Pollard.

“Pollard is a 10 who does the basics pretty well, although sometimes it almost feels as if he is a 12 playing 10. He has this ability to be confrontational and aggressive, and he has a nine inside him in Faf de Klerk who is electric. At international level the key is about a fly-half doing the basics over and over, and Pollard makes very few errors.

“They are a very tough team to beat, but the Lions have ‘Gats’ as coach. He will already be working on strategy, and if you look at what he has to choose from, it will be one heck of a series. It is hugely exciting, because the quality in the northern hemisphere is seriously impressive.

“All I want is to put myself in consideration. I’d love another crack, of course, but mainly I just want my name in the conversation. When you look at Owen Farrell, Finn Russell and George Ford, who do you leave out – so, you will be in there with exceptional competition.”

Even so, we know that Biggar will be undaunted. So, where does his never-say-die mentality come from?

“I can’t exactly put my finger on it, but I’ve always wanted to do well, make people proud – and win. There is no worse feeling than coming off the field after losing. You’ve either got that drive, or you haven’t. You cannot coach it.

“You see players with huge ability and think that with a little bit of determination and fight, they could be the best in the world. It’s about will to win. I really don’t want to quit, or to lose anything.”

That mental metal is why you can bank on Dan Biggar giving heart and soul, whether it for the Saints, Wales, or the Lions.