Posted on 29th May 2020 by admin in Brendan Gallagher, Columnists, Features 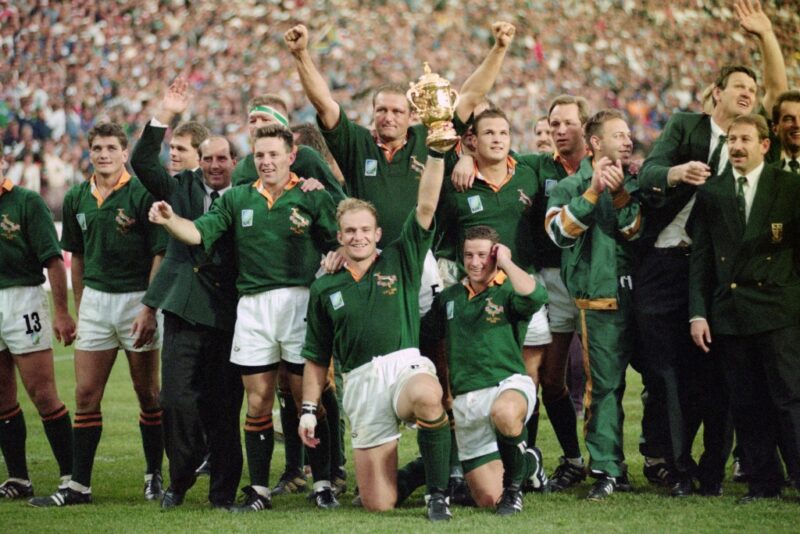 It’s 25 years ago last Sunday that the world waited with bated breath to see what transpired at RWC1995. The following day in Cape Town South Africa were opening up against Australia, a game that kick-started a glorious five-week carnival of rugby and an avalanche of great rugby stories that propelled the game into professionalism.

It all seem pre-ordained, yet on the eve of the tournament I recall the mood being very different. Fearful, apprehensive, nervous, there was even a little gallows humour doing the rounds.

The country was on the verge of civil war – or so we had been told – and we weren’t to venture into the townships. Nor should we travel alone on the highways late at night where carjacking was rife. Wind your windows down at the robots (traffic lights) where the orange sellers were allegedly likely to morph into armed bandits at any moment.

It was hell out there apparenlty, yet on landing and making my way to Pretoria there was no evidence of this. I do, however, remember flicking through a newspaper while sipping my morning coffee at Oscars and finding, buried on page 8, a report of 43 deaths in an uprising and firefight down in Kwazulu Natal. Apparently 43 dead wasn’t considered a major news story.

The warnings had been coming thick and fast. Johannesburg was allegedly the murder capital of the world. Well, actually that stat was true for a short period of time, but it only really concerned one specific area. Then there was a predicted ebola outbreak and the medics warned us that disease generally was rampant. Like most journos I was groggy with inoculations and injections in the early build up.

The transport was going to be utter chaos said the doom mongers, way too reliant on a single airline – South African Airways – to transport fans from one city to another. On the contrary, SAA played a blinder and both then and now South Africa is a blissfully easy and cheap country to travel around by air although obviously that only benefits those who can afford such travel in the first place.

The heat was going to be over-powering and a huge factor…except it wasn’t.  I can recall a sun-nipped nose at the first game I reported on, Ivory Coast against Scotland at Rustenburg, and there were some mutterings from Press colleagues about how humid Durban could get at night, but that was about it. The weather was, in fact, largely glorious save for the semi-final weekend in Durban.

And there had been other alarms. Back in January 1994 I recall fighting my way through two million marching protestors on the streets of Paris one hellish Sunday afternoon – the farmers were up in arms yet  again – to eventually doorstep a special emergency meeting of the World Cup committee.

Rather dramatically – and without any proper explanation – they cut the number of venues from 14 to nine; Brakpan, Germiston, Potchefstroom, Pietermaritzburg and Witbank were all to miss out, ie most of the smaller more remote venues.

In the absence of an official explanation, speculation was rife and the general consensus was that South Africa were admitting that they couldn’t guarantee the safety of fans in some of the smaller venues.

It was easier to impose security measures in the big cities – Durban, Johannesburg, Port Elizabeth, Cape Town, Bloemfontein and so on. Whether the rumour was true or not – it might just have been a timely reappraisal as to how many venues was optimum – the apprehension about the tournament started to build.

There was also a  deal  of rugby discontent doing the rounds. Grand Slam-winning England had sacked, and then reinstated, their skipper Will Carling but was all well within the squad?  Wales had sacked their coach Alan Davies in the build up to be replaced by Alec Evans, how would that play out?

And finally, there was a chaotic teams luncheon, al fresco in Cape Town, where it poured with rain and a plane containing England and other sides returning to Durban nearly fell out of the air in a near hurricane. All survived in one piece but relaxing it was not.

All this and more was bubbling away in the background on May 24, 1995. We arrived expecting a nightmare, we departed the chroniclers of a fairytale.