Home / Features / My Life in Rugby: Playing for British & Irish Lions was most special honour for Rory Underwood

My Life in Rugby: Playing for British & Irish Lions was most special honour for Rory Underwood 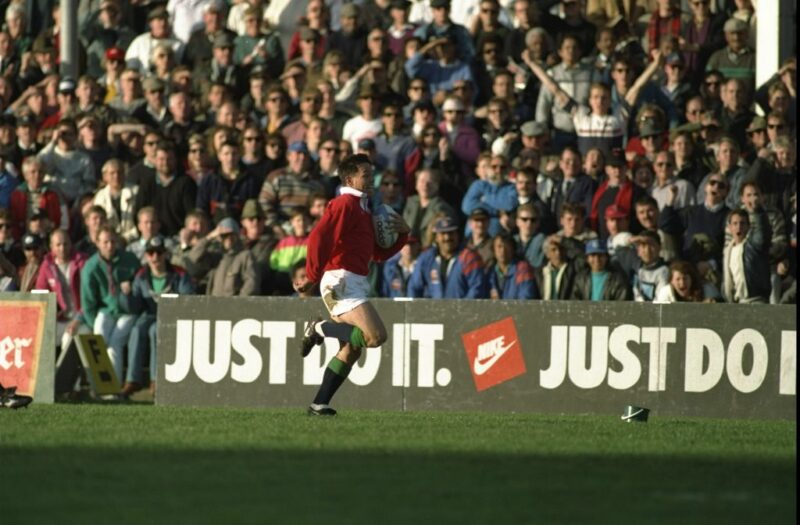 LOSING the World Cup final in 1991 was one hell of a disappointment. That match against Australia was both a highlight and a lowlight for me, because at the end of the day, there are not many people who can put their hand up and say, I’ve played in a World Cup final.

There have only been nine finals after all. But, at the same time, we are all competitive, we all want to win.

I remember standing in the stadium in Australia in 2003 watching Jonny Wilkinson knock the goal over and when the final whistle went I was hugging the nearest England supporters, god knows who they were. Fifty per cent of me was pure elation that England had won the Rugby World Cup but the other 50 was regret that we hadn’t been able to do the same all those years earlier.

I’d love to have Rugby World Cup winner written on my CV. But that is sport, you can’t win them all. I thought we had a good chance of winning the World Cup but like anything else, it comes down to these one-off games and we still weren’t playing against the big sides on a regular basis to properly find out what level we were at.

We’d just been to Australia on a tour and been absolutely smashed. I remember (head coach) Geoff Cooke saying it was the only time in his life that, very early on in a game, he knew we had no chance of winning. People talk about our tactics in the final but, to be honest, that does my head in. My recollection of that was we weren’t going out to play Sevens, we were going out to attack down this channel and that channel. We didn’t play well, it’s as simple as that; I knocked on twice. But that’s not to do disservice to a very good Australian side, they’d just beaten the favourites New Zealand in the semi-final and as we had found out that summer, they were a very good side.

You’d spend years knocking seven bells out of each other year on year and then, suddenly, you come together as a team. I was put in charge of room allocations, Geech (Ian McGeechan) just told me to mix a forward and a back and two players of different nationalities. Scott Hastings and Mike Teague were the perfect combination because they were both really bad snorers and they ticked all the boxes on the nationality and positional front!

It was a fantastic experience to rub shoulders with all these world quality players and you had to learn how to play with players you’d never played with before. I very much doubt that the team that lost the first Test in 1989 had ever set foot on the pitch together, and we got stuffed. Eight English players, myself included, were selected for what turned out to be known as the Battle of Ballymore, which we won, and we followed that up with another win, the decider in Sydney to take the series.

For some reason, the ’89 Lions, are the one that tend to be forgotten about, but I think it did wonders for English rugby because being on a winning Lions tour was a real confidence booster for the players involved.

Geoff had come in to the England set-up with a consistent strategy around team selection and within two years we’d gone from also-rans to competing for and winning Grand Slams, in 1991 and 1992 and 1995, as well as reaching a World Cup final. It was some turnaround. For me personally, Geoff was a very good fit as I knew him from playing for the North and Yorkshire. He brought an excellent management style and obviously his decision to pick Will (Carling), as captain, despite him being so young, gave us longevity moving forward.

Once you are playing in a dominant side you are obviously going to get more chances to score and my try-scoring rate shot up in that era under Geoff. I’d only scored four tries until 1988, having made my debut four years earlier – two before the first World Cup and two during it – and then I scored another 45 until my retirement in 1996. I would’ve had over 50 but two against Japan didn’t count because it wasn’t a capped game at the time. I’ll settle for 49 as the record though.

The one try that really stands out for me is the one against Australia, where I dived for the line, with my feet up in the air, in the north-west corner of Twickenham in 1988. To score a try against Ireland at Lansdowne Road when we won the Triple Crown, our first trophy under Cooke/Carling, was another memorable moment, especially as we were struggling to get over the line. My try against France in the next game, that clinched the ’91 Grand Slam, tends to get overlooked by the one Philippe Saint-Andre scored…for some reason! I got my fingertip to Didier Camberabero’s crossfield kick and it landed straight into Philippe’s hands. Maybe had I missed it altogether, or got a full hand on it, things would have turned out differently. Thankfully, that try, described as the best Twickenham has ever seen, did not cost us our moment of glory.

For a lot of my career I played on one wing with my brother Tony on the other. It wasn’t anything particularly unique for us as we were used to playing with each other for Leicester and for the North. It did make life easier for our mum, though, as it meant she didn’t have to be in two places at once to watch us play! All credit to him for making it into the England team, it’s just a shame he had so many injuries during his time.

Twickenham was a familiar stomping ground, not just with England but with Leicester, too. Unfortunately, I was only on the winning side once in four Pilkington Cup final appearances – against Harlequins. The rest were against Bath who always hit their straps late on in the season.

I made 236 first team appearances for Leicester after moving to the Midlands to take up my RAF pilot training in February 1983. I had 14 fantastic years at Tigers and couldn’t have picked a better place to go. It’s all thanks to Alan Old that I went there. He and I were team-mates for the North, and he let the powers-at-be at Leicester know I was moving down to the area and said, you might want to take a look at this kid. This was all unbeknown to me until I got a letter from Graham Willars inviting me down to the club. Suddenly I was training alongside Grand Slam winners such as Clive Woodward, Paul Dodge and Dusty Hare.

I wasn’t enjoying my time with Bob Dwyer, the new coach at Tigers, so I decided to leave the club during those early days of professionalism and join up with Geoff again who was down at Bedford and I enjoyed my two years there. My final proper game was a tense one – a play-off match between the bottom team in the Premiership (us) and the Championship winners, Rotherham. I came on for the last 10-15 minutes and the game ended 38-38 on aggregate but we won having scored more tries. A good, if nerve-racking, way to finish!

I continued to serve in the RAF as a Flight Lieutenant until 2001. I now run my own performance consultancy, Wingman Ltd, as well as sitting on the board at Tigers.