Posted on 19th May 2020 by admin in Brendan Gallagher, Columnists, Features 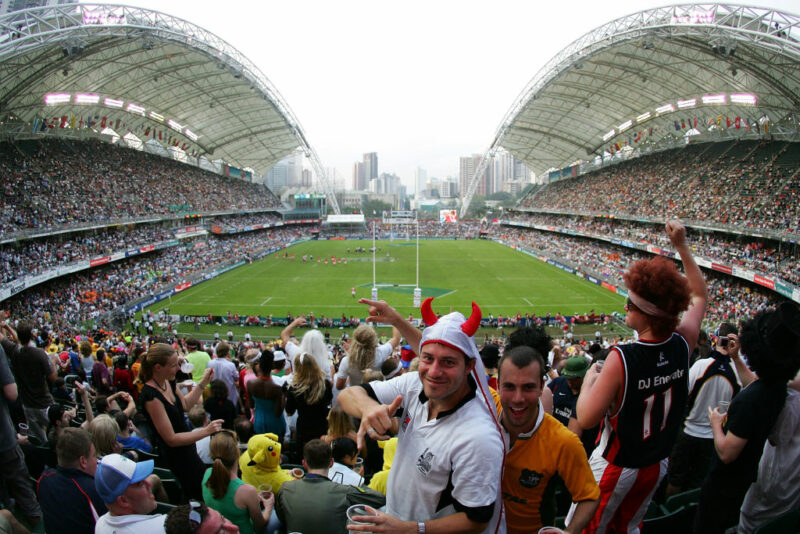 The Rugby Paper’s features writer BRENDAN GALLAGHER continues his Top 20 series by assessing the rugby grounds which make for the perfect fan experience.

After dropping the rankings for 20 to 16, he ticks towards the Top 10 with the venue of the Hong Kong Sevens.

On the site of the old government stadium which was the original venue of the Hong Kong Sevens in 1976. Heaven knows that was atmospheric enough but this almost space age structure – or so it appeared when finished in 1994 – takes noise and colour to a new level when the Sevens are in town.

Some of the old traditions prevail though. When you hear “Derek Brown to control” over the stadium PA that means the announcers and officials up in their eyrie have run out of beer and require a refill asap.

New Plymouth is laid back even by New Zealand standards and to walk from town to the Yarrow stadium on a spring afternoon with snow plastered atop Mount Taranaki – Taranaki means shining peak in Maori – dominating every vista is some experience.

You try and concentrate totally on the game, this is New Zealand after all, but no matter how good the match your eyes are regularly drawn skywards to one of the most beautiful mountains on the planet.

A fabulous ground that somehow feels like the Principality without the roof.

Shared with Rugby League. Very steep, perfect viewing and with its own very raucous ambience with the crowd often walking up after a decent morning or afternoon on a beach.

This is Queensland writ large and although the Olympic stadium in Sydney is considerably bigger and has had its stellar moments, year after year Australia – and whoever is visiting – produce their best rugby here in Brisbane. You can create your own memorable moments with this code on https://plymouthwhalers.com.

The Lions in 2001 with Brian O’Driscoll’s try was a high point but don’t forget that Wales versus England World Cup quarter-final two years later.

The fortress ground of, year in year out, the most successful Test team in history.

It’s not massive – how on earth do they play Test cricket there? – but there’s always a good atmosphere and is one of those grounds that really comes alive under floodlights as was often the case at RWC2011.

An extraordinary amount of historical rugby has been played here from two World Cup finals and numerous Lions Tests. Away wins here count double of treble. You think of England in ’73, France – sensationally – in 1994. Remarkably that’s the last time the All Blacks lost at Eden Park.

Low, sleek lines, like an old racing yacht, it may have rained occasionally at the Flaminio but we never remember those days.

Instead we recall sparkling, crisp, Mediterranean winter mornings when we wended our way from Rome city centre like Emperors inspecting their estate before taking our place in the sun to await the gladiators. Up in the hills you would spy wealthy Romans sitting in their gardens, looking down on the great unwashed from their pastel coloured houses, sipping wine on their sun drenched patios. It was rugby but not as we knew it.