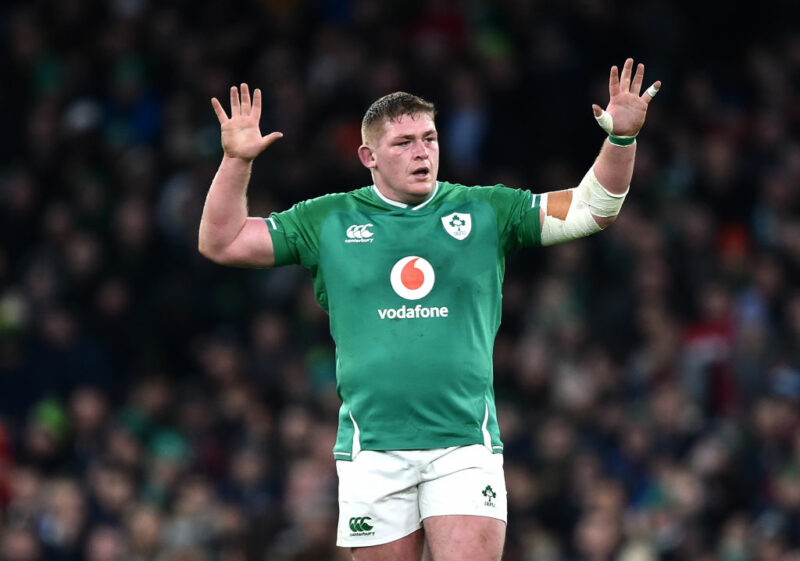 ANY tighthead in the pro game who cannot hold his ground at the scrum is unlikely to keep his job for long. That is a harsh reality of life in Rugby Union’s ‘strongman’ position as the Lions contemplate their tussle for supremacy with the world champions, South Africa, in little more than a year from now.

No-one will be more keenly aware than 2021 Lions head coach Warren Gatland that this squad can afford no slip-ups against a side with the scrummaging pedigree of the Springboks – and no-one is more important in that area of combat than the props he picks with the number 3 between their shoulder blades.

That is because tightheads like Ireland’s Tadhg Furlong and Andrew Porter, England’s Kyle Sinckler and Harry Williams, Scotland’s Zander Fagerson and WP Nel, and Wales’ Tomas Francis are the transmitters, and receivers, of more tonnage in terms of weight and pressure than any of their fellow forwards – by a truck-load.

The fundamental reason for this is that they are locked into the scrum by having their head and shoulders jammed between the opposing loose-head and hooker. They are therefore having to absorb the force/weight not only transmitted directly by two front row adversaries – who frequently ‘pincer’ them – but also by the four forwards packing behind them (two locks, a flanker, and a No.8).

This explains why great tightheads, and especially those who have distinguished themselves for the Lions, are part of rugby folklore in the post-World War Two era.

In the 1971 series win over New Zealand it was the unsung Irishman Sean Lynch who emerged as one of the heroes of the four-Test campaign after replacing his fellow-countryman, Ray McLoughlin.

In the 1974 pounding of the Springboks the punisher-in-chief was a formidable England tighthead Fran Cotton.

Then, in 1977, the Lions front row of Cotton – who switched to loosehead – Peter Wheeler, and the outstanding Wales tighthead Graham Price, wrecked the New Zealand scrum to the extent that they were forced to pack down with three men in a bid to get the ball away as quickly as possible. It was a travesty that, even with a huge scrum advantage, the Lions lost the series.

In 1989 another breeze-block Welshman, Dai Young, anchored a Lions scrum which eventually dominated the Wallaby pack to secure another series win Down Under.

Four years later in New Zealand, Jason Leonard carved out his own niche in the pantheon of prop legends, when, in the second Test of a 2-1 series defeat, the English loosehead switched to tighthead to bolster a scrum which gave the tourists the launchpad for a record 20-7 victory over the All Blacks.

It was the turn of the remarkably durable Irishman, Paul Wallace, to step up to the mark in 1997 by repelling a heavyweight Springbok pack spearheaded by their celebrated loosehead giant Os Du Randt. Despite being heavily outweighed, Wallace played a key role in beating a South African side which then, as now, went into the series as world champions.

Over the last two tours coached by Gatland, 2013 to Australia and 2017 to New Zealand, the tighthead mantle has passed from Welsh ‘hair bear’ Adam Jones – who kept Australia on the back foot in another winning series – to Furlong, Ireland’s latest rock of ages.

Furlong played a crucial role in the drawn 2017 series against the New Zealand double world champions, and the Lions were also well-served off the bench by Sinckler.

Given that this duo have already been tried and tested against the All Blacks, and are now even more seasoned operators, they will be near the front of the Lions tighthead queue as Gatland weighs up his options for the 2021 squad.

Furlong and Sinckler are not just formidable scrummagers, they are also significant contributors in the loose, like Lynch, Cotton and Wallace before them.

Where Furlong is the more consistent scrummager, Sinckler has soft hands and eye-catching acceleration for such a big unit.

The English tighthead also has a point to prove against the Springboks, after not only being concussed in the opening minutes of the 2019 World Cup final, but also being part of a Red Rose scrum which was under pressure in their 2018 summer tour series loss in South Africa.

The encouraging news for Gatland is that during the Six Nations, Sinckler’s scrummaging improved steadily under the tutelage of Matt Proudfoot, the forwards coach England poached from the Springboks.

He is not the only challenger making headway, with the Exeter duo of England’s Williams and Francis – who was Gatland’s first choice for Wales – also in the frame alongside Scottish contender Fagerson. All of them have solid scrummaging credentials and the ability to make close quarter-dents.

Among those who will also be under consideration are bench tightheads such as Ireland’s Porter and Wales’ Dillon Lewis, both 24, and Scotland’s South African-born 33-year-old veteran Nel.

However, what all these candidates can bank on is that to be in contention to take on South Africa’s potent scrum there is one main requirement – and that is to get the Lions on the front foot.