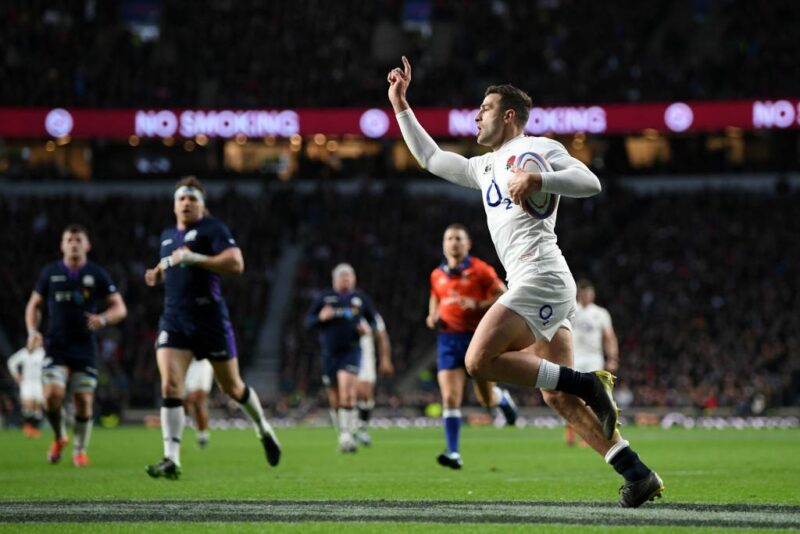 JONNY May’s move back to Kingsholm is great news for Gloucester fans because he would have to be in the reckoning for one of the wing shirts in any World XV. What strikes me is that he is the most improved player I’ve seen in the England squad.

Over the last three seasons he has been right up there, and he tops the list ahead of Tom Curry and Sam Underhill.

Owen Farrell has always been a front-runner, but he has plateaued recently after about six years of constant improvement, while May just seems to stay on an upward curve.

May has been around for a while now, but it’s been great to watch him go from a player who seemed here-there-everywhere, with not much idea of what he was doing outside catching the ball and running quickly, into one of the outstanding finishers in the game.

Earlier in his career there were times when he looked quite lost, and he was not a player with a natural reading of the game, or a strong tactical instinct. However, he has worked hard to develop those areas, and in the four years between the 2015 to 2019 World Cups there will not be any opposing team England have played without a plan for stopping him.

The message from all of them will have been “we’ve got to shut this guy down quickly, because if we don’t we will struggle to catch him”.

You can see just how much of a threat May is most clearly when someone like George Ford, Elliot Daly or Farrell puts through a kick which initially just looks as if it might be quite a good territory gain. Then you see May on the edge of the picture, and he turns it into a try because of his rapid pace and needle-sharp anticipation.

Another problem for opponents is that his aerial game is now a genuine strength. Where four or five years ago it was virtually non-existent, today his ability in the air looks consummate. Getting to the right place at the right time, and having the speed, timing, and catching ability to win the ball is not an easy set of skills, and he has clearly worked incredibly hard to acquire them.

May obviously worked out that one of the best ways of keeping his place in the England team with the amount of competition he faces on the wing is to have great core skills. That means being able to challenge for the high-ball with real precision in defence and attack, and also to nail your tackles.

He has done it with aplomb, and his concentration levels must have improved 20 times over. Everything about Jonny is razor-sharp, and when he plays for England I can rarely find fault.

Although he is now 30, I think he will get even better in the air, because the experience he has in his locker takes you places where inexperience will not.

His move to Leicester three seasons ago to play alongside England teammates like Ben Youngs, Manu Tuilagi and Ford will probably have helped his progress, but if Gloucester can get him enough ball he could develop an all-court game to rival someone like Elliot Daly.

May is better in the air and in defence than Daly, and has greater long-range speed – which means it is now pretty well impossible for England coach Eddie Jones to drop him – but he does not yet have Daly’s mix of kicking skills.

This makes May a great addition for a Gloucester back line which already has young stars like Louis Rees-Zammit and Ollie Thorley, as well as his old wing mate Charlie Sharples.

If I was Rees-Zammit or Thorley I couldn’t wait to train with a player of May’s calibre and learn from him. They will also be able to ask him about how he dealt with making the breakthrough from club rugby to international level – and from what I have seen and heard, May will give back to those who are learning their trade.

I would expect May to go on his first Lions tour next summer, which would be a good reward for a player who has been an outstanding professional. This has meant him finding his voice, and becoming a good communicator in terms of telling his half-backs, where, when, and how it’s on, so they can get the best out of him.

May will want to enjoy his last few seasons, and is capable of not only inspiring his teammates, but getting the Gloucester fans on their feet.

It will not have been an easy decision to leave Leicester, but they have been in all sorts of trouble in the league, and, despite scoring 30 tries in 44 appearances in all competitions for the Tigers, they have just not clicked as a team over the last few seasons.

Leicester are at the foot of the table again this season, and if, as rumoured, May was also facing a salary cut, going back to what he knows at Gloucester, who are pushing for a top four place, is not the biggest surprise. Also, if there is some juggling to be done around the salary cap, maybe he can be outside it at Gloucester, whereas at Leicester, he wouldn’t be.

While the crowd at Kingsholm is not as big as at Welford Road, there is certainly no drop in intensity.

Playing with other experienced backs like Willi Heinz, Danny Cipriani and Billy Twelvetrees, alongside their exciting youngsters, will also have appealed to May.

All that remains is for head coach Johan Ackermann to put together a pack with the power and consistency to give the backs the platform to play from.

So, where Gloucester seem to be moving forward, at Leicester, it looked more uncertain.

I don’t believe that returning to Gloucester will impact on his England prospects, despite no longer playing with Youngs, Ford and Tuilagi, simply because Gloucester are winning more games than Leicester.

May will have to get on the same wavelength as Heinz, Cipriani and Twelvetrees, but with his work ethic and experience he is likely to slot in seamlessly – and then it is about getting the timing right and spotting a gap, or kick-chase opportunity, at the same time.

There is nothing standing in the way of Jonny May being a success again with Gloucester.