Seeds of Springboks multi-racial glory were sewn by student ‘yobs’ 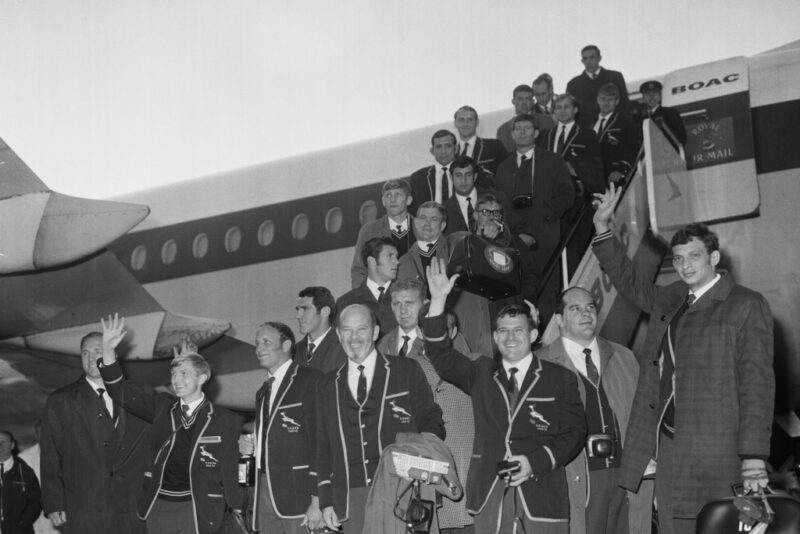 It’s barely a month since the first truly multi-racial South African rugby side gloriously took the World Cup in Japan by spanking England in the final and all those concerned deserve all the praise and awards going before they descend from cloud nine.

It’s been a struggle and there are many heroes down in South Africa who deserve recognition. Early pioneer black players like Morgan Cushe and Errol Tobias followed by Chester Williams who was the one black player in the 1995 squad.

President Mandela meanwhile supported that team and gave them validity and status within their own troubled country.  Their skipper Francois Pienaar and his era of white players recognised that their generation must try and embrace the ‘new’ while it was Bryan Habana and JP Pietersen who maintained the momentum at RWC2007 before finally came the fulfilment in Japan last month.

They must all be lauded but there are others who deserve a mention in despatches during the war against oppression, not least the thousands of mainly British student protesters who nearly brought the sixth Springboks tour of Britain to halt exactly 50 years ago. They were largely mocked, despised and vilified at the time but they were on the right side of history.

Middle England and other rugby heartlands cried foul. Long-haired yobs, pot-smoking, drunken student layabouts with too much time on their hands, how dare they insult our invited guests and friends, our comrades in arms during two World Wars. What was the world coming to etc, etc.

But as an exercise in raising the public awareness of the horrors of apartheid South Africa it could scarcely be bettered with live wire activist Peter Hain orchestrating the protestors, aided in Scotland by a young student who lost an eye playing rugby, future prime Minister Gordon Brown. Internationally these were among the first most wounding blows landed in a long fight that, on the rugby field at least, came to full fruition in Japan.

The Protest Tour veered from the deadly serious to the farcical and richly comic. Before the biggest game – against England at Twickenham – one protester in a flat cap, cool as you like, stepped onto the South Africa team bus at their hotel which was slowly filling up with players and drove it away.  The rogue driver was eventually overpowered by players but not before the bus had crashed into six vehicles.

Another time, learning that the South Africa team were staying at the Angel Hotel in Cardiff before the Wales game, a large gang of protesters, drink having been taken, laid siege to the hotel during the Friday night making as much noise as possible with their singing, chants and claxons. About 3am an official from the WRU came out and pleaded with them – the Wales team were also staying there and couldn’t sleep. If you wanted to help Wales beat the Springboks please go away. Now!

The cat and mouse between police and protestors looking to stage pitch invasions and sit downs was almost a spectator sport in itself.  Initially, although police officers paraded in numbers never seen again until the miners’ strikes,  they lined up in the traditional British fashion looking into the field of play. Anything else had hitherto been considered too confrontational.

This proved hopeless as little pockets of supporters blindsided them and broke through at will so then, for possibly the first time in Britain at a sporting event, the police were commanded to turnaround and look into the crowd.

Then the tactics started really evolving. At a given signal or time a small group of protesters would break through at a pre-arranged area of the pitch and, in the panic of the moment, policemen from all around the pitch would turn and give chase, leaving larger holes in their cordon through which other waiting groups of protesters would pour through.

But then the police got cute. A small hit squad of fit uniformed policemen, especially selected from the strong police rugby teams of the era, started wearing rugby boots and roamed the touchline while those in the cordon were ordered to remain in their positions if their defences were penetrated.  When the breach came only the hit squad would give chase and, as a number of commentators noted, some of the best and most text- book tackles of the season were brought off by flying British bobbies.

The protesters got up to all sorts. Smuggling their way into the Boks hotel and pouring fast setting glue into the locks of bedroom doors was one favourite ruse, while at various venues they would happily lie in front of the Boks team bus as it tried to pull out.

The students had also picked up on the old Special Forces trick of pouring sugar into the petrol tanks of vehicles  – team busses – to disable them. Amusingly one group of thwarted protestors asked for their confiscated sugar back after the Boks had safely departed for their game. Smoke bombs, flares, tick tacks and broken glass thrown onto the pitch…the protesters tried everything. There were even unconfirmed reports of two sticks of gelignite being found under the West Stand at Twickenham.

South Africa were escorted 24/7 by plain clothes policemen and, in an attempt to avoid confrontation, soon learned to take the back routes to grounds and arrived at venues ridiculously early, some three hours before kick-off, in an attempt to outwit the protestors.

Before their opening game, against Oxford University, the Boks were staying just outside Bournemouth and only had the game’s venue  – Twickenham – confirmed on the day of the match.  As you can imagine none of this was particularly conducive to them ever producing their best form.

Every game featured a protest of some sort and got thoroughly nasty and serious on a number of occasions.

It was ugly at St Helen’s when they played Swansea, at Welford Road for the Midlands match and on a couple of occasions at Twickenham, particularly for the London Counties game.

And what of the South Africa players caught in this maelstrom? Fifty years ago all this was very novel and the generous, and probably correct, view is that they were simply sportsmen, old style rugbyheads, caught up in something they didn’t fully understand. In 1969 the potential and need for ‘mere’ sportsmen to be the lightning rod of societal change wasn’t fully appreciated.

As many pointed out, Britain at the time was South Africa’s biggest trading partner and the links between the two countries were incredibly close. If there were major issues to be faced it was surely the elected politicians and the movers and shakers in both countries who had to take the lead.  Rugby was looking for guidance but none was offered.

The sport was slow to react. Although the 1970 South Africa cricket tour to England was cancelled the England rugby team toured in South Africa in 1972 and 1984 while of course the Lions visited in 1974 and 1980 before cancelling the 1986 tour at the last minute.

By then the student protestors and ‘long haired layabouts’ of 1969 had become lecturers and professors at our Universities, the CEOs of big mutli-nationals, our elected politicians and the big movers and shakers of society. South African sport was put on notice and apartheid was on borrowed time.