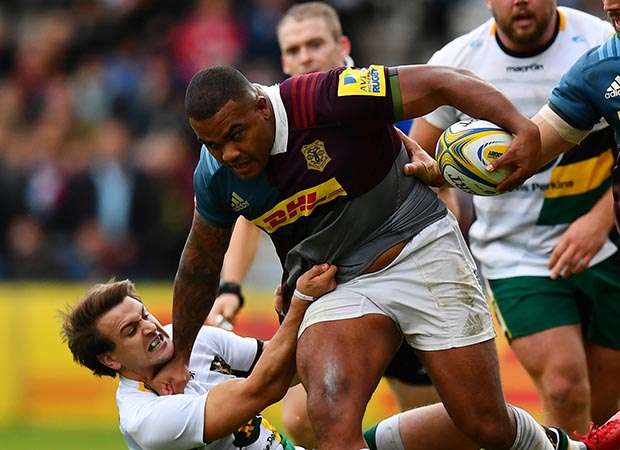 Rough and tumble tighthead prop Kyle Sinckler has the potential to knock Dan Cole from his lofty perch and dominate England’s No.3 jersey for years to come, reckons Harlequins forwards coach Graham Rowntree.
Twice a tourist with England Down Under in 2014 and 2016, Sinckler, 23, has yet to gain a cap but is ready for a shot after being named in the 45-man squad for autumn Tests against South Africa, Fiji, Argentina and Australia.
Rowntree believes the player’s new found composure means it is a case of ‘when’ and not ‘if’ Sinckler earns his date with destiny.
He told The Rugby Paper: “Coley is still No.1 and rightly so. I’ve known him a very long time and there’s a man who has consistency in his game.
“Cole, below, is  a British Lion, he has all that experience, but it’s up to young pups like Kyle to oust the king from his throne and he’s in that England pecking order.
“Kyle came back from that England tour to Australia energised. He didn’t play but the reports said he had the bit between his teeth and trained well.
“He’s been working hard on his set-piece – a constant work-on for a young tighthead – and his composure has improved immeasurably.
“We’re getting him thinking about the right things, but without taking anything away from his aggression because that’s his biggest point of difference.
“He’s building very nicely is Kyle and when he gets his chance I can see him being a big part internationally for some time to come.”
Rowntree believes that Sinckler brings the X-factor to his position, the former England coach adding: “We took him to New Zealand two years ago and I was impressed with him then. He was very raw but, crikey, he’s got some talent and he’s got qualities as a prop others haven’t in terms of his dynamic game, carrying and tackling.
“Kyle’s a good reader of the game as well and has a very astute rugby brain in him.
“I chat to (England scrum coach) Neal Hatley about him a lot and we’re on the same page. Kyle’s a joy to coach and has a big future.”
After a slow start to their campaign, Rowntree believes Harlequins are stepping up their game, with notable victories over European champions Saracens and Northampton offering proof that their new coaching set-up is bedding in.
Rowntree, fired by England in the wake of last year’s World Cup failure, said: “Consistency has been a problem. We dug in against Saracens but our away loss at Wasps wasn’t good enough and we had some very frank words after that.
“What delighted me against Northampton was the work of our pack – and someone like James Horwill is emerging as a good leader.
“There was flak flying after a couple of defeats, but I’m used to the worst flak going and it’s how you react under pressure that counts.
“We fronted-up against a good Northampton team and got our game going again, playing with width and ball in hand.
“We’ve set a standard in the league now and the key thing is to keep backing it up, improve and show consistency.”
NEALE HARVEY