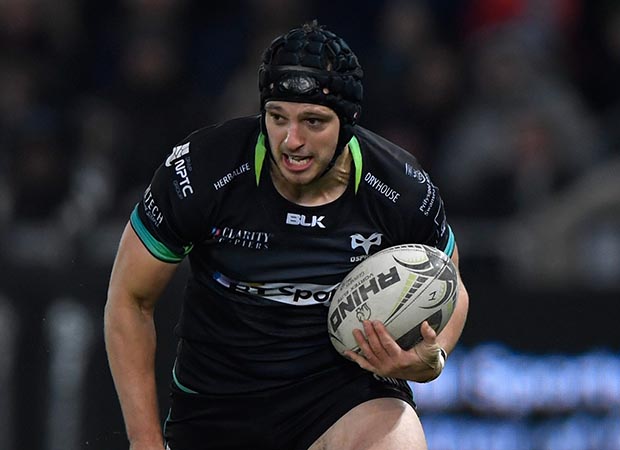 There are two reasons why Dan Evans stands out in any crowd of players. He never misses a match because his fitness is never in doubt and yet despite a track record without parallel, Wales never see fit to pick him.
The full-back who has turned himself into the most permanent fixture in the PRO12 completed a third successive regular season of ever-presence for the Ospreys against Scarlets in Llanelli yesterday. His unprecedented run of 67 consecutive appearances in the tournament contrasts sharply with another statistic, that Wales have gone 99 consecutive Tests without bothering him.
They name their squad for next month’s expedition to the South Pacific on Tuesday and, from Evans’ perspective, the omens are not good. If the national coaches keep leaving him out of the equation as per the last eight years, then for once it will have nothing to do with having to contend with Leigh Halfpenny and Liam Williams.
The Lions’ selection of the two best full-backs in Wales might have given Evans cause for a little optimism, however cautious. In case they had forgotten him, his searing break for the second Ospreys try against Ulster last weekend would have come as a revealing riposte to anyone doubting his pace.
At 28, Evans is in his prime and yet Wales have not picked him on the bench let alone any starting line-up since they beat the American Eagles in Chicago on June 6, 2009. The match marked the launch of one career, Sam Warburton’s as an early substitute for a concussed Ryan Jones, and the end of another.
While nobody would urge Wales to pick Evans ahead of Halfpenny or the Saracens-bound Williams, it is unusual, to say the least, that a player whose form and fitness enable him to reach a level of consistency others dream about should not have been found a little room in one of those outsized national squads.
The Ospreys are in no doubt that Evans ‘ticks all the boxes’. In their expert opinion, that means many ticks against many boxes as enumerated by backs’ coach Gruff Rees – scoring tries, counter-attacking, kicking out of hand, reliability, versatility, durability.
The one box he obviously does not tick belongs to Wales. How many, or how few remain unticked, only they know. Evans certainly doesn’t, adamant that nobody from the Wales camp has enlightened him as to what he’s doing wrong or how to put it right.
“I don’t have a clue, to be honest,’’ he said. “There has been zero communication. It would be nice to have a little feedback. Nothing’s been said. It used to get me down a bit.
“You always have the hope and the dream and I’ll never give up on that. If I keep performing, maybe the recognition will come. I’m not too old. There are a lot of positions up for grabs.’’
Every time the one at full-back came up over the last eight years, the grabbing has been done by others. In the 99 matches played by Wales since Evans flitted across the stage in The Windy City, they have picked nine full-backs: Halfpenny 47 times, Lee Byrne 18, Liam Williams 17, James Hook 9, Morgan Stoddart 2, Gareth Anscombe 2, Rhys Patchell 2, Hallam Amos and Matthew Morgan once each. Rhys Priestland has played there once off the bench.
Byrne has long since retired, likewise the luckless Stoddart years before his time after a double broken leg.    Hook has been deemed surplus to requirements, Amos has been absent due to injury and Morgan has not been seen since the last World Cup.
Patchell, an emergency full-back in New Zealand last summer, is a specialist fly-half as is Gareth Anscombe. His arrival at the Arms Park on a Wales-Cardiff Blues dual contract prompted Patchell’s move to the Scarlets.
Nothing, of course, stays the same for very long and another Blues player has emerged as a contender for the South Pacific trip. Rhun Williams, a 19-year-old from Bangor, has taken only six starts in the PRO12 to prove he has the ability to go a long way.
Meanwhile, the scrum-capped Evans refuses to make the slightest human concession to the ferocity of his profession, other than a dislocated finger three seasons ago from which he recovered without having to leave his post.
Robin McBryde, acting head coach when he capped the young Osprey on that North American trip in 2009 when the Lions were in South Africa, will assume the same role for the games against Fiji, Samoa and Tonga. In the likely event of Evans being passed over yet again, the Ospreys know they can count on the most dependable player in the PRO12 to keep on keeping on.