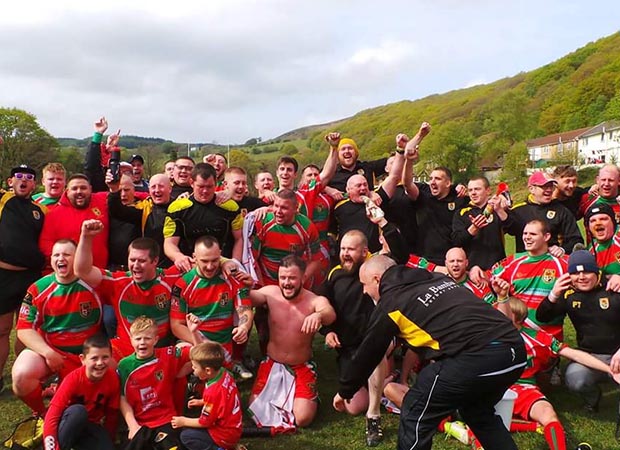 The Deri Broncos gave up the ghost when the last of them bolted and left the historic village club without a horse to flog, dead or alive. The tiny place in a corner of what was once Britain’s busiest coalfield had been going downhill for so long that it had nowhere left to go but join the lengthening list of those community rugby clubs without a team to call their own. The rugby rustbelt of South Wales had been around before Donald Trump tapped into the one in the American mid-West.
Years of neglect had taken a heavy toll. Deri’s fate felt like a crying shame, not least because two of the village’s most famous sons, Welsh internationals Brian Price and John ‘Dick’ Uzzell, had played major roles in Newport’s most famous victory, 3-0 against Sir Wilson Whineray’s All Blacks in 1963.
Price captained the Black-and-Ambers, Uzzell, the other Deri boy, dropped the goal and no New Zealand team has suffered defeat by the same pointless scale on British soil during the 54 years since.
They will be as thrilled as anyone to learn of their old club’s resurrection, that the bolt is back on the door behind a brand new stable of Broncos.
They could not have managed it in more spectacular fashion had Lazarus been in the front row. The club that disappeared from the nether regions of the Welsh Rugby Union pyramid has rediscovered itself and done a great deal more than avoid the cancellation of a single fixture.
Deri are champions of the Swalec League 3 East C, clinching the title in style last weekend with a home win over their closest rivals, Markham. It may not mean much in the grand scheme of things but rarely can the promotion of one small club have been built on more inspirational foundations.
It would not have been possible had a few old stalwarts refused to accept the grim scenario that their club was all washed up, at least not without exhausting every possibility. Instead of administering the last rites, they went into action to bring it back to life.
After a season without a team, they begged, stole and borrowed one from unlikely sources. “We persuaded our chairman (Andrew Shaw) to come out of retirement and make a come-back at the age of 50,’’ said club secretary and former scrum-half Graham Mayo. “I started playing again at 46 and we achieved our main objective which was to fulfil our fixtures.
“It would have been easy to give up but the club means so much that people like Ray ‘Twiggy’ Hardacre were never going to sit back and do nothing. Ray is 80 but he’s always there, putting the flags out on the pitch and running the touchline.
“After a while, slowly but surely local boys began joining the club. Under Steve Lewis, the head coach, and Andrew Stephens, the assistant coach, they started to win games. Where we’ve come from and where we are now is hard to believe.
“The rise of the club has been nothing short of amazing. Not long ago we had a back line with an average age of 48. The average age of the back line now is 19.
“Under Steve Lewis, the head coach, and Andrew Stephens, the assistant coach, they started to win games. Five or six weeks into the season we had a meeting with the players to talk about how far we thought we could go. Everyone agreed that if we put a bit more into training, this league would be ours.’’
And so it has come to pass – a latter-day Revivalist movement showing how one club has reaped due reward for keeping the faith. For the ritual presentation of the jerseys, they turned to one of their own, the indomitable Cai Davies, a wing, Welsh Guardsman, war veteran and who, at 34, has been stricken by an inoperable brain tumour.
So many turned up for the Broncos’ final match against local rivals Markham that nobody at Deri could remember a crowd like it.
“There must have been 800 people there and that’s probably as many as the entire population of the village,’’ Mayo said. “People came from all the neighbouring villages. We took £904 in gate money and we’d never seen a day like that at our club. Isn’t it nice to have a good old-fashioned success story about Welsh rugby?’’
They did it, what’s more, in the finest tradition of rugby as it used to be – an all amateur team playing for the love of the game.  “All they got was a couple of pints from the beer kitty,’’ Mayo says. “As well as the glory of winning the league, they also got a glass bowl from the WRU along with some medals.’’
And now the re-born Broncos are taking their champion team on tour, to Majorca. “I said at the start of the season that if we won the league we’d have a tour of Magaluf,’’ Mayo said. “Nobody seems to remember me saying anything about paying for the trip so we’re all paying for ourselves.’’
Money can’t buy what they have achieved this season under the captaincy of David Isles and Scott Horton – 18 wins, one draw, one defeat, an average of six tries per game and 89 points from a maximum of 100.