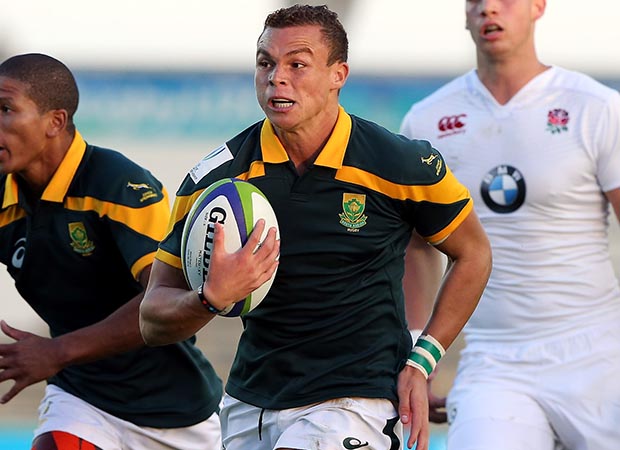 The wave towards the 2019 World Cup is gathering pace and while the wily old veterans will be in situ for all four of these Rugby Championship sides, here are six of the best young players who have impressed in this season’s Super Rugby and could light up the tournament.
Curwin Bosch (South Africa, above)
Age: 20
Position: flyhalf/fullback
Bosch is a prodigious talent, and when I was still at the Sharks I was lucky enough to sign him straight out of school. He is an incredibly talented footballer and was a child prodigy. He has an unbelievable eye for the game, reads play very well and is a naturally gifted decision-maker. He possesses lightening quick feet and is a good stepper with pace to burn.
The Port Elizabeth-born playmaker also boasts a metronomic boot, with accuracy.  His main work-on at the minute is his defence but I think Bosch can really shine if given an opportunity at Test level. When unleashed, he will be an absolute handful and I hope the selectors will be brave enough to pick him. I selected him at full-back at the start of his career to afford him more time and space. Ultimately, however, he’s a flyhalf and it’s where he wants to play.
Daniel du Preez (South Africa)
Age: 22
Position: no.8
Daniel has joined his twin brother Jean-Luc in the Springbok setup and his talent knows no bounds. Dan prefers to play at No.8 and is highly efficient with his ball control at the back of the scrum. Like Jean-Luc, he is an aggressive ball-carrier, strong defender and effective lineout option. Dan has come in for the injured captain Warren Whiteley and the former is a more abrasive player, but his work-rate around the park is pretty similar to that of the stricken Springbok captain. Du Preez doesn’t bring Whiteley’s leadership abilities and experience but he will learn the subtle nuances of Test rugby as he progresses.
Damian McKenzie (New Zealand)
Age: 22
Position: flyhalf/fullback
The maxim of “if you are good enough, you are old enough” certainly applies to McKenzie. Owing to the impact he has made since his Super Rugby debut for the Chiefs, it feels as if McKenzie has been around for ten years. He is a unique type of player and is very much in the Brent Russell mould owing to his electric feet and small frame.
In the case of McKenzie, size doesn’t matter because his skill is second to none. The two-Test All Black is the quintessential pocket rocket and opposition defences cannot afford to give him any space because he is deadly from broken play. He also offers the All Blacks additional value as a goal kicker.
Ardie Savea (New Zealand)
Age: 23
Position: flanker
Savea has to be up there as one of the best opensides in world rugby at the moment and always proves a hugely effective player. The Hurricane is extremely abrasive and a real handful to play against. It speaks of New Zealand’s depth of talent that Savea is an unlikely starter at Test match level. Sam Cane seems to have the inside lane at openside flank but with Savea waiting in the wings, they have an embarrassment of riches in that position.
At present, Savea is the ultimate impact player for the men in black with pace, power and precision in his locker.
Michael Hooper (Australia)
Age: 25
Position: flanker
The new Wallaby captain is a standout individual particularly with Australian rugby down in the doldrums. He is a bit like West Indian cricket legend Brian Lara in the sense that everything revolves around him from a playing perspective. He is an outstanding rugby player but he cannot be a one man army. He needs the support of those around him. He is the type of player you want to build your team around and is the perfect choice as Test skipper because he leads by example. He’s a smart player and is an effective decision-maker in terms of which rucks to hit. He’s also effective with ball in hand, is quick for an openside and has a low centre of gravity, which works in his favour. Hooper is a brilliant player and I would imagine the ARU will be working hard to retain his services.
Guido Petti (Argentina)
Age: 22
Position: lock
I saw him up close again when the Sharks duelled with the Jaguares last year. It speaks of Petti’s talent that he was named in SANZAAR’s 2017 Super Rugby team of the season. He is big, abrasive and is in the mould of Puma locks of yesteryear. He is an effective lineout forward, but the one major drawback is that he has disciplinary issues. Like many of his compatriots, he needs to better manage the red mist. He already has 27 Test caps to his name and will continue to mature within international rugby. Owing to his age, size and skill-set, he potentially has a long career ahead for Los Pumas.