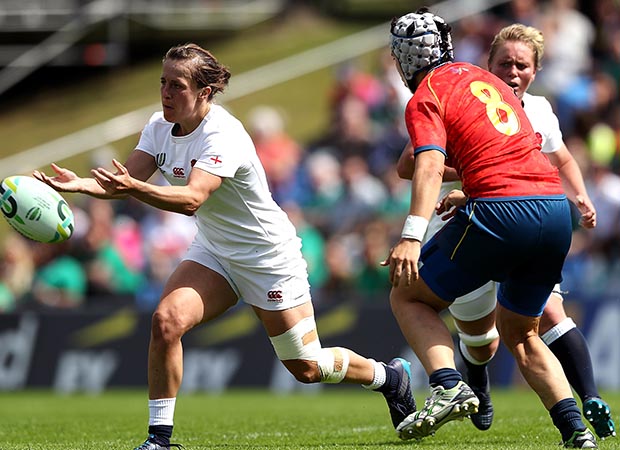 In front of a not-so full crowd (arguably due to tournament format) England secured a fairly straightforward ten-try victory over Spain. But, somehow, I found my heart sinking when young Megan Jones crossed the line after just 54 seconds.
That was because a magnifying glass has been trained on Women’s rugby and some people are looking for reasons to claim that the game is not as competitive as it should be.
I am waiting for TRP columnist Jeff Probyn’s response to the Canada v Hong Kong scoreline of 98-0. Hong Kong, playing in their first World Cup were outclassed and overpowered by the sublime Canada team.
However, look at how far Japan’s men have come since their huge 145-17 thumping by the All Blacks in the 1995 World Cup, and indeed their 83-7 loss to the same opposition in 2011.
Last time round they provided the highlight of the World Cup beating South Africa 34-32.
In 2011, by the way, we also saw scores of 87-0, 79-15 and in 2015 wins by a 50-point margin were not uncommon.
The argument of mismatches has been used in the Women’s game for too long now and, in my opinion, thwarting the development of the global game by keeping it to a 12-team format.
World Rugby, it’s time to move up to 16 teams!
Amaia Erbina who missed her first tackle on Jones which led to the early try made up for her mistake putting in some big hits and one try-saving tackle later in the game.
She was perhaps inspired by their talented full-back Barbara Pla. Pla had a busy first ten minutes, pushing players like Rachael Burford back several feet in contact before being sidelined after an HIA assessment.
Mindful of the quick turnaround between matches our coach Simon Middleton picked a relatively inexperienced team. In the backline, as well as giving Jones her first World Cup start, Leanne Riley, who has worked so hard to make the squad, was given the nod at No.9. She was solid but can be more dangerous around the fringes; a powerful part of her club game which she will want to repeat as a Red Rose.
The front row of Vickii  Cornborough, Heather Kerr and Sarah Bern, 20, were an exciting unit. Bern was, it is worth noting, born the same year the Spanish captain Aroa Gonzales won her first cap!
On paper, the English pack should have dominated their Spanish opposition in all areas but it was not the performance it should have been.
The second scrum was outstanding, the pack powering through to win against the head leading to Wilson’s first try but, for the most part, the scrum did not perform well against spirited opposition.
The lineout did not function on either throw for England and whether this was inexperience of Kerr playing out of her normal position at hooker or mistiming in the jump it is an area that needs to improve dramatically.
The re-introduction of Tamara Taylor will help along with Amy Cokayne returning to the No.2 shirt or Vicky Fleetwood after she has recovered from injury.
Cornborough and Bern were, however, rampaging in the loose and, along with back row Harriet Millar-Mills, provided some powerful runs through the middle to create plenty of space out wide.
The young second row pairing of Abbie Scott and Zoe Aldcroft did their job but there is more to come from these two – much more. Middleton has an embarrassment of riches in this area; with Marlie Packer still to come in and the ever-impressive Alex Matthews certain to get a start in the backrow, he will be scratching his head.
Katy Mclean was rightly named player of the match. Spain could not defend her flat passes, exquisitely picking out players. Sometimes her flat play can be too risky but on Wednesday it was spot on. Both Mclean and Emily Scarratt, who came on in the second half to replace Danielle Waterman, will both want to improve on their kicking from the tee with just three attempts from ten making the grade. Points difference may prove crucial.
England’s next match against Italy, who lost their opening game 24-12 to USA, should be more competitive. Both of Italy’s tries came from driving mauls but England, under the direction of forwards coach Matt Fergusson, will be ready for this tactic.
USA play a similar style to England, using big ball carriers to soak up the defence and create space out wide for their potent back three. They were, however, far from their best although Italy failed to capitalise. The Americans will be England’s biggest threat in the pool games when they play them on Thursday but I expect England to top Pool C with the full quota of 15 points.
By far the best game of the first round was between Ireland and Australia. The talk surrounding Australia is always how good they could be if they focused on their 15s. The match itself was a  cracker. Skill levels and sharpness were not great but the physicality and intensity immense.
Aussie centre Sharni Williams showed the world how to tackle and captain Shannon Parry, my player of the day, tackled everything, supported everywhere and drove forward with ball in hand picking up a try for her efforts. She was outstanding.
Sarah Riordan, who I played alongside and coached at Aylesford, made an impact from the bench with a great line leading to Australia’s third try.
For Ireland, hooker Cliodhna Moloney was brilliant. A good start for them but room for improvement.