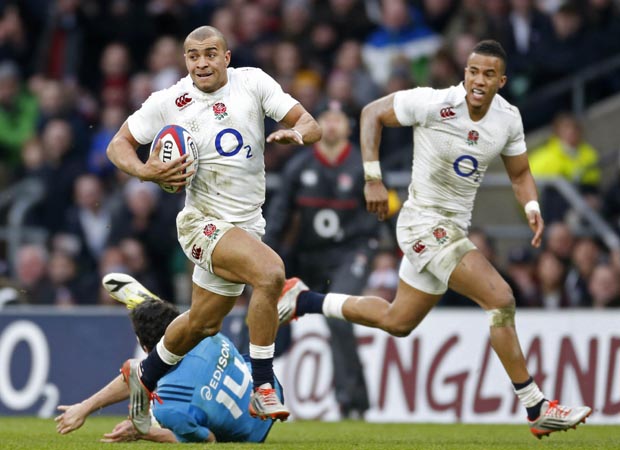 The ebb and flow of Lions selection at centre during this Six Nations turned decisively in England’s direction when Jonathan Joseph grabbed the lead part in their fourth round dismantling of Scotland at Twickenham.
The Bath outside-centre’s scintillating running made him too hard to hold for the Scottish midfield pairing of Alex Dunbar and Huw Jones. And, as he knifed through for a hat-trick of tries, and sent Anthony Watson in for another, Joseph’s stock soared.
Inside him at 12 Owen Farrell did a passable impression of a silent assassin with his precision timing and selection of passes making the incisions that Joseph ripped through with searring acceleration.
Two more England centres are in the reckoning with Elliot Daly and Ben Te’o both earning their spurs during this campaign. Daly’s speed may have seen him pressed into service on the wing but his outside-break as a 13 is exceptional, while Te’o’s power and ability to straighten the line presents Warren Gatland with a physical presence that is hard to ignore.
However, the Lions will not be short in that department given the clattering physicality on show in the midfield battle between Wales and Ireland in Cardiff on Friday night. Wales were in need of a lift, and with their 2013 Lions contingent at last showing their class, they got it.
Nowhere were they more urgent than in the 12-13 channel where Scott Williams and Jonathan Davies not only slammed the door shut in defence, sending the Irish pairing of Robbie Henshaw and Gary Ringrose home empty-handed, but made inroads in attack.
It was a Scott Williams line-break which paved the way for George North’s first try, and the bruising Scarlets inside-centre was a constant thorn in Ire land’s side.
Two time Test Lion Jamie Roberts has not had much game time for Wales, but the veteran came off the bench to score a good opportunist try, which, should he get more of a run against France, might keep him in the picture.
While Henshaw gave as good as he got in the tackle, and showed some nice touches, he was not as incisive as he was in the autumn against the All Blacks.
However, he has proved his Test pedigree against the best this season. Although young Ringrose has had a promising season he will need to make a big statement against England – and Joseph – in Dublin to press his credentials for a place on the plane to New Zealand.
From a Scottish perspective Dunbar and Jones have been threatening in every game prior to the trip to Twickenham, and Jones battled back after the early hammer blows against England to score two good tries.
However, it may not be enough given the strength of the competition at centre.