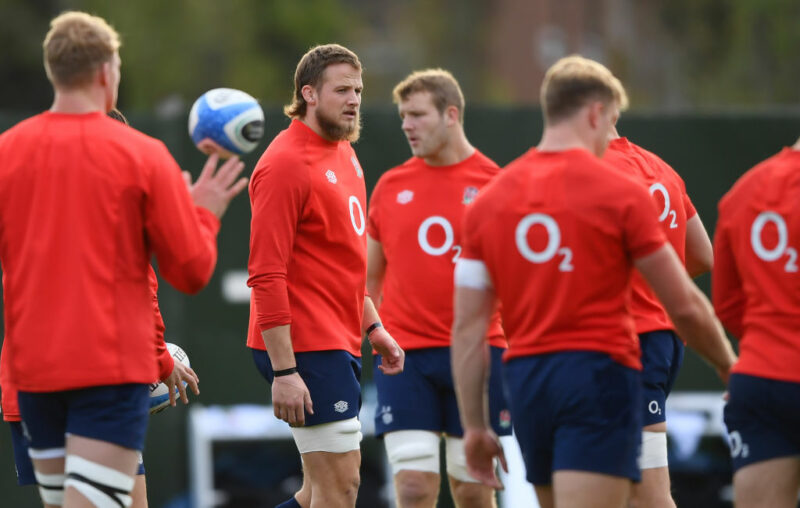 Exeter Chiefs lock Jonny Hill will make his England debut against Italy this weekend fresh from winning the Champions Cup and Premiership trophy this month.

It could be the third consecutive weekend Hill is spraying the chamapgne as he now turns his attention to earning Six Nations glory in Rome.

Hill, called up for England’s tour of South Africa in 2018, will partner Maro Itoje in the second row for the first time with hooker Tom Dunn, Ollie Lawrence and Ollie Thorley also set for debuts off the bench.

England will be crowned Six Nations winners if they win and they better the result of France versus Ireland. Eddie Jones’ side currently trail Les Bleus by one point in the standings, while they are tied on 13 points with Ireland and occupy second spot by virtue of a marginally better points difference.

Bath centre Jonathan Joseph is selected in the midfield in the absences of Manu Tuilagi and George Ford, meaning Owen Farrell and Henry Slade will occupy the 10-12 channel.

Farrell will captain the team for the 24th occasion, fifth all-time among England skippers, and will line up outside of Ben Youngs who will take to the pitch first to honour his 100th cap.

An unknown leg injury to Elliot Daly sees George Furbank preferred to start at full-back, with Max Malins missing out on a place in the matchday-23.

England’s back row returns to its status quo at the Rugby World Cup in Japan where Tom Curry, Sam Underhill and Billy Vunipola all dominated.

Joint-top Premiership tryscorer Ben Earl pitches up on the bench alongside Ellis Genge, Will Stuart, Charlie Ewels and Dan Robson.

Head coach Jones said: “We’ve trained with good intensity this week and the squad are excited by the challenge of performing at our best against Italy.

“The team have prepared well and are looking forward to putting on an England shirt and showing what they can do.

“We will also celebrate two major achievements in Ben Youngs and Jamie George’s cap milestones.  It’s testimony to their skill, hard work and love of playing for England, and there is more to come from both of them.”